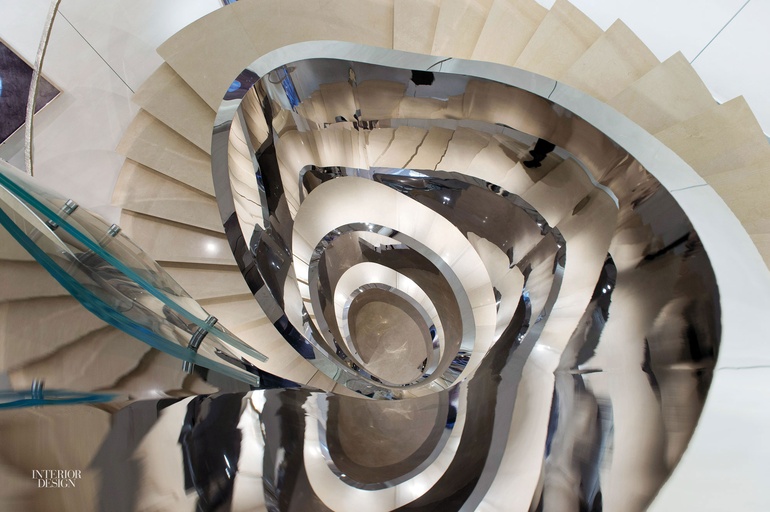 Pick a luxury brand. Bulgari, Chanel, Christian Dior, Fendi, Hublot, Louis Vuitton, or Ermenegildo Zegna. Interior Design Hall of Fame member Peter Marino has created exceptional showplaces for them all, from New York and Los Angeles to London, Paris, Rome, Singapore, Hong Kong, and Tokyo. With the august Dior brand, celebrating its 70th anniversary, Marino can boast of a relationship that was established more than 20 years ago, with the redesign of the flagship maison in Paris, and has taken an Asian direction over the past couple of years, with boutiques in Seoul, South Korea, followed by Beijing. Of the two newcomers, Seoul is the mega-store, housed in a ground-up building by Atelier Christian de Portzamparc. Five stories, plus a basement, encompass 10,300 square feet.

“To take the brand to a new level, I followed the architecture,” Marino continues. “The entire building is the brand. It’s a one-off, its own story.” Not to mention a major tribute to refinement in a city that he describes as “tough and cutting-edge.” The corner building is wrapped with enormous white forms, perhaps sails or tulip petals, molded from fiberglass. Step inside to see how he translated those shapes into drapery: white powder-coated paillettes that curtain a corner of the handbag section that greets entering shoppers.

The curtains are not the only stunners on the immense ground level. In the center sits a pair of semicircular benches by Claude Lalanne—the seats are ginkgo-leaf shapes, the ginkgo being a harbinger of health and prosperity. (Incorporating Lalanne worked well at Dior in Paris, so why not repeat here?) Directly over the benches hangs a piece by a Korean artist, Lee Bul. It’s a sculpture, a swirling tangle of chains, beads, and crystals. “Bonkers,” Marino notes.

With Lalanne, we are duly introduced to a principal component of this and many Peter Marino Architect projects: commissioned art and design. Well known as an aficionado and a collector, Marino makes stellar examples a delight in all his work. He has installed more than 250 notable pieces for  various clients over the course of his career, he estimates—a figure he arrives at, by the way, after flipping through the pages of the recently published Peter Marino: Art Architecture. He’s outdone himself in Seoul, selecting pieces by the likes of Paul Evans and Nendo for display throughout the store. On an upper level, there’s furthermore a bona fide gallery. Every three to six months, it mounts rotating exhibitions organized by guest curators, positioning Dior as a cultural entity as well as a commercial enterprise.

Seoul’s gallery is a first for Dior but not the only innovation. Likewise new is the idea of including a café. A collaboration with French pastry chef Pierre Hermé, it’s all the way at the top of the building. Marino gave a wink to the lofty location by installing cloud-shape mirrors on the ceiling. Seating is upholstered in pastels alluding to the macarons, artisanal chocolates, and cakes on offer.

He didn’t break completely with heritage, however. Shimmering pale gray, the signature color straight from Dior in Paris, is expressed by a plethora of luxurious materials in Seoul. Note the silvered tables, the silvery leather upholstery on seating, the lacquered acrylic panels, the antiqued glass, and the verre églomisé. Moving from silver to dark gray, textured plaster walls “thick like impasto,” he remarks, set off the floor’s limestone. Traditionally French, the floor even has contrasting black marble cabochons. But closer examination shows them to be subtly scattered rather than regular in arrangement.

The ground level is given over to handbags, other accessories, and perfume—the bottles seemingly infinite in their mirrored enclave. The level above is devoted to fine jewelry and watches. It’s on three, home to the day, cocktail, and evening-wear salons, that the most money changes hands. Nevertheless, Marino notes, since the majority of Dior’s sales overall occur in department stores, the stand-alone boutiques function more as brand statements, allowing him greater artistic license. He took full advantage of that in evening wear, a glamorous setting populated not by earthbound mannequins but by floating figures suspended from the ceiling. Again, this merchandise display is unique to Seoul. Again, tradition is tweaked. Ditto for the VIP lounge. No old-school boiserie here. Instead of actual paneling, it’s pictured in Robert Polidori’s photomurals of the Château de Versailles.

Traveling between these different environments requires taking a trip to the future, via a spectacular staircase with balustrades of mirror-polished stainless steel and glass that undulate as they spiral. At grand houses, Marino points out, the stairwell is customarily a portrait gallery, showcasing family lineage. Here, in lieu of oils on canvas, individually framed monitors loop video paeans to the house of Dior, eye candy for Seoul’s technology-obsessed hipsters.