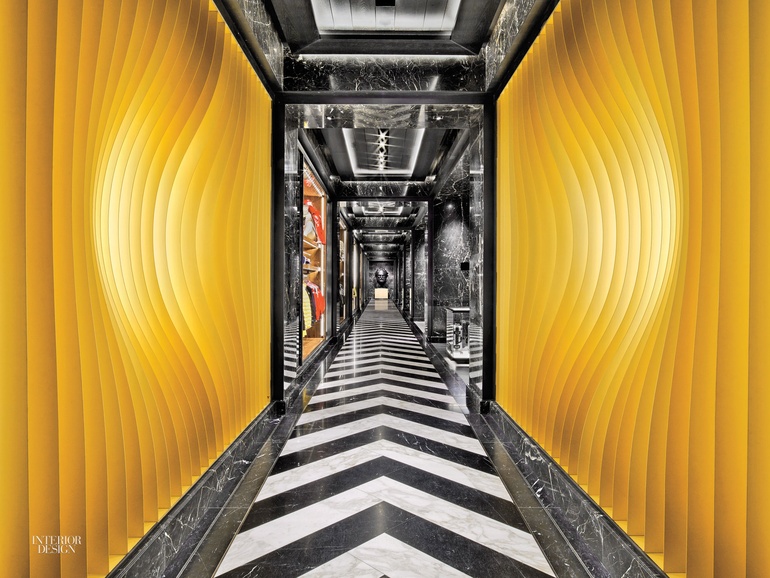 For some, winter sport is all about speed. For others, it’s endurance. Neither was necessarily the stuff of fashion statements until the 1980’s, when Moncler updated its glossy, puffy jackets badged with tricolor heraldry in blue, white, and red. Skiing in a Moncler, to say nothing of swishing down a city sidewalk in one, proved to be a style that the label could market globally. And it did, under new ownership, opening shops worldwide, most of them by Gilles & Boissier.

The rapid expansion of Moncler, which was founded in 1952 in the French mountain village of Monestier-de-Clermont and is now based in Milan, has been personally led by chairman and managing director Remo Ruffini. A fashion scion, Ruffini first approached Gilles & Boissier on personal business, an interior for his sailboat. Since then, he has commissioned a series of impressive houses and apartments from the husband-wife firm. Which explains why the New York flagship looks as if he might take up residence there. “You’re in a Remo world, really an extension of himself,” Patrick Gilles, who led the project, says with a laugh. Dorothée Boissier adds, “Remo and Patrick are best friends, a pair of strong characters.”

Like a grand Parisian apartment, the sequence begins with a proper foyer. Shoppers, having opened the tall glass front doors with the help of Louis-style oiled-bronze pulls, encounter a bronze Moncler logo set into the floor and, to either side, wall installations comprising tall, curved louvers anodized gold and backlit to radiate a sunny warmth. It’s a surprisingly abstract, contemporary introduction to an interior built upon a firm foundation of tradition.

Beyond the foyer, the two-level, 6,500-square-foot space continues with an impressively long and wide corridor passing an enfilade of salons with different themes. “A series of rooms for a succession of sensations,” Gilles says. There’s a chic “library” that underscores Ruffini’s love affair with books while offering men’s jackets and trousers for sale. In a space that feels more like a living room, a curve-backed, black-lacquered sofa upholstered in embossed ivory-colored leather beckons customers to enjoy a drink. Freestanding vitrines throughout contain steampunk mannequins.

Overall, these rooms hark back to the origin story of Moncler, what Gilles calls its Gallic DNA. “We made sure to keep that identity,” he explains. But not too literally. For example, the wood used for furniture is not French oak but American walnut. For the carved paneling, he drew on memories of the boiserie at his grandmother’s château near Toulouse—a reference point that served him and Boissier well on previous New York projects, collaborating with Interior Design Hall of Fame member Christian Liaigre on a restaurant and designing the Baccarat Hotel New York. (Gilles & Boissier commissioned cathedral chandeliers in carved oak for both interiors.)

As with the most glamorous of apartments, there are acres of marble. Slabs for the floors and walls are caramel-streaked chocolate, gorgeously figured black, or snowy white. All that stone suggests architectural permanence, although few things are less enduring than a New York retail location. Moncler’s space, in fact, is the result of Crate and Barrel vacating a coveted corner, which was then divided into three. That left Moncler a slice with narrow frontage and essentially no natural light, but Gilles saw the configuration as an opportunity. He gave a catwalk-esque vibe to the main corridor, paved with graphic black-and-white chevrons. It runs from front to back and terminates with the grandest of oversize gestures, an enormous bronze of a man’s head.

The sculptor was clearly thinking about a Moncler advertising campaign that featured a bearded outdoorsman, just in from the cold. “The texture is a little bit rough, attacked by the ice and sun, so you know he is coming off the mountain,” Gilles observes. Given the size and weight of the head, 6 feet tall and 1,400 pounds, installation was a logistical challenge, to say the least. The base, a cedar block, had to be specially reinforced, as did the floor below, but the extra effort was worth it to Ruffini. “It’s an important store for him, in an extremely important city,” Gilles says. The pair are now at work in a handful of other major destinations around the world: Milan and Florence, Italy; Shanghai, Hong Kong, and Macau, China; Melbourne, Australia; and Toronto.