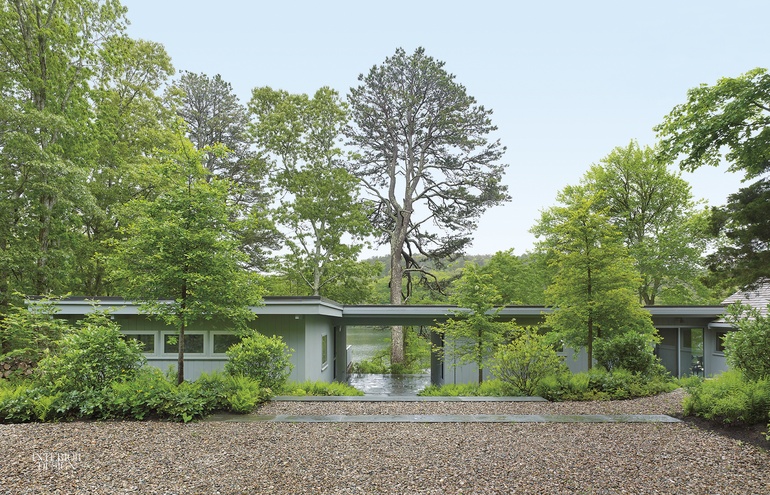 Modernist royalty, by marriage, Lilian Swann Saarinen had met her husband, Eero, when she was studying sculpture at the Cranbrook Academy of Art, headed by his father, Eliel. After the younger Saarinens’ divorce in 1953, she moved to Cambridge, Massachusetts, with their two children and asked former Eero Saarinen and Associates architect Olav Hammarstrom to expand a fisherman’s cottage in the Cape Cod town of Wellfleet for use as a low-budget family getaway. “On the Cape, a lot of architects built on a dime and a prayer,” SPG Architects principal Eric Gartner explains. Considerably more painstaking was his own task: updating the Hammarstrom design for repeat clients, one in financial services and the other a sculptor.

Hammarstrom had built a flat-roofed extension to the cottage, which became the living area, to bring total square footage to 2,200. SPG preserved the living area’s cathedral ceiling but ripped out the sleeping loft tucked beneath and repaneled the walls. “The owners didn’t like the knotty-pine visual,” principal Coty Sidnam explains. New gray-stained walnut planks are roughly the same width as the pine had been.

On the exterior, SPG swapped out rotted siding for Western red cedar, again milled to the original dimensions, then stained it gray. Jalousie and divided-light windows gave way to uninterrupted double-glazing, improving both sight lines and energy efficiency. Glass technology also came to the rescue for the deck balustrade, previously just posts with swagged rope. Laminated low-iron glass—a Saarinen-worthy innovation, for sure—satisfies safety codes while dissolving into the view of a glacial kettle pond.