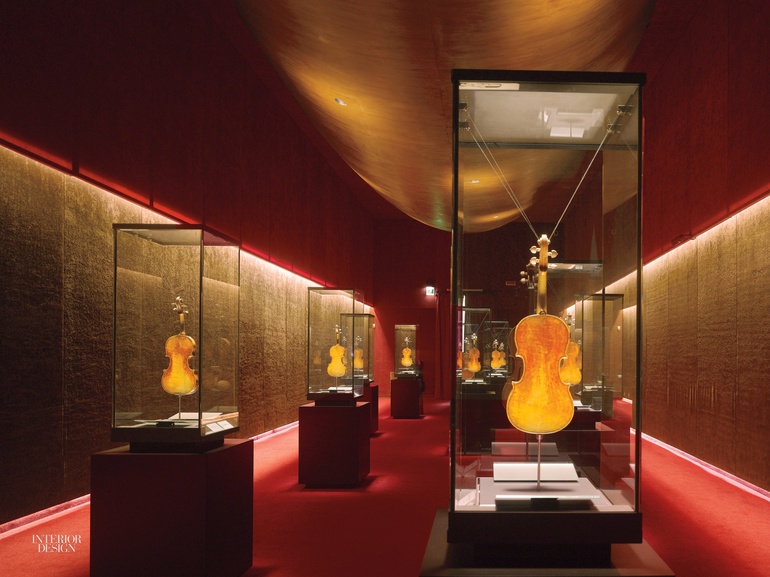 How could Cremona, the northern Italian city inextricably tied to violin-making since the 16th century, be bereft of a showplace celebrating not only maestro Antonio Stradivari and the Guarneri family but also the makers of today? Problem solved, thanks to architect Giorgio Palù. He helped the Fondazione Antonio Stradivari Museo del Violino to replace three nondescript exhibition spaces around town by taking over one larger location, a redbrick municipal building, the Palazzo dell’Arte, constructed during and after the Second World War.

Palù is a principal of the firm Arkpabi, its name playing with the word architetti combined with parts of the last names of Palù and his fellow principal, Michele Bianchi. “We’ve put our signature on Cremona—with strong contemporary volumes and lots of glass,” Palù begins. Indeed, a tour through the city reveals Arkpabi’s residential and hospitality projects, such as the Delle Arti Design Hotel, as confirmation.

He describes the original interior of the Museo del Violino’s building tersely, as “grand rooms without soul.” There were two wings, each with a central courtyard, joined by a longer volume housing a gymnasium. Over the decades, the place served myriad functions: a site for conferences, trade shows, and exhibitions, a dance hall, laboratories and storage for archaeologists, and a school with a warren of classrooms. His intervention imposed order and created a future-oriented whole, 70,000 square feet packed with interactive features. He enclosed the courtyards, razed interior walls, and established a clean plan of 10 galleries. The gym became the jewel in the crown, an auditorium for violin and cello soloists or chamber music ensembles.

Because greater volume means better acoustics, he excavated beneath the onetime gym to increase ceiling height for the auditorium. That also allowed for two balcony levels to rise above the seats ringing the circular stage at the center. As for the balconies’ organic and sculptural forms, some liken them to the obvious, a stringed instrument. Palù explains that his inspiration also came from the human body, specifically the legs of a seated woman: “I could go on for days.”

Balconies are veneered in maple. Most flooring is oak, while the stage is Alaskan yellow cedar, a softer wood for enhanced acoustics. The plaster of the upper walls and the ceiling is painted white and pale gray, respectively. Tall windows are blacked out with acoustical drapery.

A little peckish before or after a performance? In Italy, especially, a museum without a café is unthinkable. Here, the musically named Chiave di Bacco occupies one of the enclosed courtyards. (Its counterpart is a gallery for temporary art exhibitions.) Though the courtyards are now indoors, a painterly “sky” takes the form of printed acrylic panels on the café ceiling. The “setting sun,” centered over a freestanding bar beckoning for aperitivi, is an enormous, glowing convex oval covered in yellow spandex tinged with orange.

The café and the temporary exhibition gallery both have frosted-glass ceilings, simultaneously serving as flooring for the museum’s upper level. Sitting on one expanse of glass, a rounded maple-veneered form, aka the listening room, contains banquettes that can seat 40 to experience filmed, recorded performances of the past century. Harking back even further is a gallery dedicated to 16th-century Cremona. A run of monitors shows the violin-making maestros and their creations, while, in front of them, a glass tabletop offers a historical map of the city.

Walk down the streets of Cremona today, and you’ll still find dozens of violin workshops. So Palù re-created one, complete with tools and parts, at the museum. On weekends, he notes, a local maker might come to demonstrate the craft and converse with visitors. There’s plenty more interaction, both analog and digital, in the Friends of the Stradivari room dedicated to lovers and collectors of the Cremonese instrument, some on rotating display. A multimedia center introduces the subject matter. For repair and research, the museum teamed up with the Politecnico di Milano and the Università degli Studi di Pavia on a pair of labs alongside.

Of all the areas in the museum, Palù cites the bridge between the Friends of the Stradivari and 16th-century galleries as his favorite. The most precious instruments are displayed here. Since that’s less than a dozen items, the problem was scale, how not to overwhelm them in a space 75 feet long and 20 feet high. For intimacy, he adopted a charming conceit: Why not make visitors feel as if they’re inside a violin case? Thus the crimson carpet and velvet wall covering. He also suspended a long curved canopy from the ceiling.

Nothing, however, sums up the august history and continuing vitality of the violin more than the gallery celebrating the Concorso Triennale Internazionale degli Strumenti ad Arco Antonio Stradivari. That’s a competition taking place every three years since 1976.