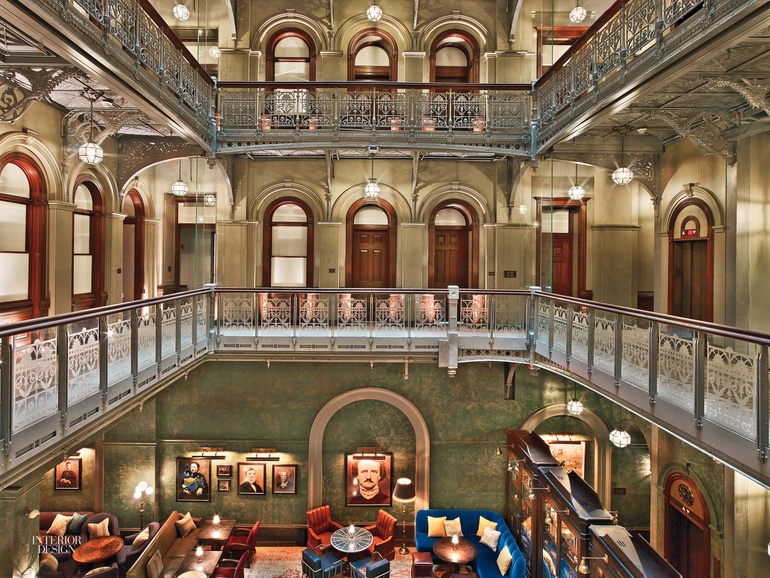 Nothing beats the “wow” of a yuge atrium. Just ask a certain New York real-estate developer. However, that doesn’t necessarily mean pink marble. The Temple Court building’s nine-story interior courtyard is a Gilded Age marvel. From the arcaded walls, cast-iron dragon brackets spring forth to support encircling balconies. The roof has an impressive pyramidal skylight, conceived in the decades between London’s Crystal Palace and Chicago’s White City.

Designed as offices for lawyers and small businesses needing proximity to municipal facilities, the redbrick building embellished with terra-cotta opened in 1883 with the anticipation of enormous profits. Lasting success proved elusive, however, and the small floor plates, typically Victorian, stumped a succession of landlords. Since the grand courtyard became recognized as a fire-safety worry, it got boxed off and forgotten. Enclosed by walls in lath and plaster, the onetime balconies became featureless corridors, and the offices emptied as the surrounding neighborhood declined. “The building was in flux for decades, because it was almost too expensive to dismantle,” Randolph Gerner notes.

Gerner first visited the Temple Court after the balcony walls came back down, when Gerner Kronick + Valcarcel, Architects, was hired by GFI Capital Resources Group chairman and CEO Allen Gross—a veteran of the high-profile Ace New York and NoMad hotel conversions—to transform the building and its 1890 annex into a hotel and to construct a mixed-use tower on a site acquired next door. The Beekman Residences, with interiors by Thomas Juul-Hansen, now fill the upper levels of the tower. Below those apartments are 10 levels of Beekman guest accommodations supplementing those in the hotel’s older buildings for a total of 287. The tower furthermore houses the machinery for the mechanicals expertly threaded through the historic building fabric. As GKV’s Miguel Valcarcel says, “You have up-to-date climate control, but you still feel you’re in the 19th century.” Indeed, Martin Brudnizki Design Studio reimagined the Temple Court to look as if it had hosted guests from the beginning.

The hotel has two public entrances. Visitors arriving to drink and dine, either at top chef Tom Colicchio’s Fowler & Wells or at seminal restaurateur Keith McNally’s Augustine, can come through the original front doorway to enter the courtyard lounge, where walls are a mottled green, and sofas sport velvet upholstery. Meanwhile, travelers with luggage enter around the corner and stop at the reception desk, which is upholstered in Persian rugs and lit by bronze lamps with elaborate fringed shades. Proceeding to the elevators involves passing through one end of the lounge, behind a run of bookcases conceived as cabinets of curiosity. As Martin Brudnizki explains, “Hotel guests can glimpse all the fun without having to walk through it.”

Homelike decor is something that he had already experimented with at the Soho Beach House, the club-hotel in Miami Beach that gave his firm its stateside toehold. For the Beekman, he developed a charming Victorian-esque floral wall covering to bring some cozy appeal to a few low-ceilinged corridors. Another bespoke pattern, for carpet runners along the atrium balconies serving as guest corridors, derived from the geometric encaustic tile beneath—a case of the building telling him exactly what it wanted to wear. Not hidden by the runners, cracked border tiles were swapped out for custom replacements.

Gutting the onetime offices yielded guest rooms and suites with a loft look. “Some of the windows are huge, each sash 3 feet high,” GKV principal Benita Welch notes. Oak floorboards are wide and distressed—reminiscent of period rooms at London’s Victoria and Albert Museum—and ceilings are painted a fashionably foggy Thames gray. Brudnizki calls his aesthetic inspirations equally British and American.

Furnishings appear to have evolved stylistically over decades, as if outmoded pieces had been occasionally swapped out for more fashionable updates. Nightstands are purposely mismatched. Lampshades aren’t perfect pairs, because the lamps aren’t either. One lamp always has a base in the form of a cobalt-glazed Fu dog—Brudnizki grew up to embrace his mother’s affection for Chinese ceramics. The Fu dog, cast especially for the Beekman, contributes to an overall effect we’ll call mischievous historical fiction. “Layering styles and periods gives a very residential angle. I didn’t think the rooms should feel like hotel rooms,” he explains.

His approach of course de-emphasized the kind of big brown cabinet in which the minibar would hide. Instead there’s something that might be a skirted side table. “We had fun with it,” he recalls. It has a round top, an evocation of a Sheffield silver bar tray in a proper English country house, and a pleated tapestry-weave drapes the base. Grasp an oil-rubbed bronze knob to swing open one fabric panel for access to the minibar offering saltwater taffy, lemonade, and Veuve Clicquot.