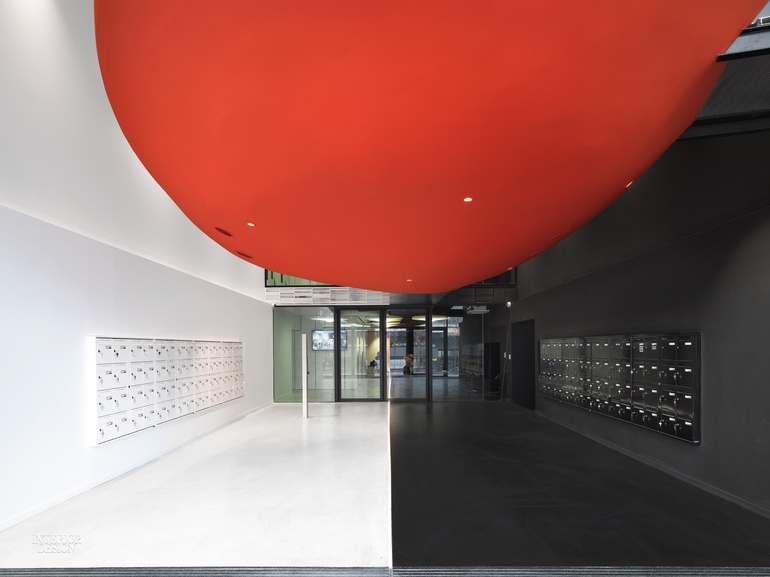 Gazing up at the front of Le Cargo—with its black cladding, round windows, and bright red blob forms visible inside—it’s easy to forget that you are in Paris. This is not the picture-postcard central Arrondissements but the site of a massive urban renewal project on the city’s postindustrial edge. And Studio Odile Decq’s bold design for Le Cargo, which calls itself the biggest business incubator in Europe, symbolizes the municipal government’s ambition to make 21st-century Paris a capital of innovation. “I was immediately excited by the brief,” Odile Decq says. “Start-ups are young and creative, so I knew I could forget the notions of a normal office space.”

Indeed, nothing about the scenario is traditional. It begins back in 1970, when the French national railway opened a freight warehouse, the Entrepôt Macdonald, that instantly became the largest building in Paris: more than ¹⁄³ mile long, with 12 acres of floor space. As time went on, everything from impounded cars to paintings in the permanent collection of the Musée du Louvre was stored there. Despite the enormous size of the structure, however, it was always intended to be expanded, with the original three levels serving as a base for higher additions, and that is precisely what a public-private partnership, Paris Nord-Est, eventually brought in the Office for Metropolitan Architecture to coordinate. Under the master plan, Decq’s studio and other international firms have designed 23 individual structures, in varying shapes and colors, along the top of the onetime warehouse. A single building has thus given rise to an entire mixed-use neighborhood of office and apartment buildings, shopping, and public services such as day care and schools, all served by a tram line and a commuter rail station.

Standing next to Kengo Kuma & Associates’s contribution, an education and sports facility, Le Cargo’s five-story addition centers on a courtyard. The 170,000 square feet are intended to accommodate 1,200 people in private office suites of different sizes, with everyone sharing meeting and conference rooms. Conscious of the informal, fluid ways that start-ups work, Decq campaigned to add break-out areas, pantries, and outdoor decks as a bonus. The idea that she didn’t have to design a “normal” office also empowered her aesthetically. She organized her ideas around the motif of a thought bubble, hence the round windows and the red blobs. For the windows, which come in four sizes, she adjusted and readjusted the configuration until she arrived at what she calls a “cloud of bubbles” across the facade. The blobs, actually the plaster-finished steel enclosures of meeting and conference rooms, have free-form contours. “Soap bubbles aren’t always perfect spheres,” she says. “When you make a bubble, it changes shape as you blow.” And, returning to the thought bubbles in a comic strip, they’re rarely depicted as full circles—they can be clouds. “Which is genius,” she continues.

Approval for these ideas was a year and a half in coming. “It’s very difficult to be innovative. Paris is very square,” she says. “That’s one of the reasons why I’m considered a bit bizarre for an architect here. Because I’m a girl, for one, who often works abroad, and I’m interested in doing what I believe in, not what other people are doing.” So how did she win the argument? “It required a lot of explaining. It was infernal. I kept saying, ‘No, I will not change it.’ In the end, someone at Paris Nord-Est OK’d it, and he convinced the others.” She stresses that it takes energy to impose one’s creative vision: “Architects don’t always  have the courage to persevere. You have to fight for yourself. Architecture is a real contact sport.”

Now that Le Cargo has opened, occupancy is at about 50 percent. And while the occasional beanbag chair, foosball table, and Post-it Note art on windows hint at the incubator culture, the overall design has a sophisticated contemporary feel. The bold color palette of black and white, accented by red, keeps the interior from feeling like your average start-up playground.

On a tour of the premises, the twentysomething male, jeans-clad tenants everywhere routinely stop Decq in the hallways—her Goth makeup and heavy-metal spiky coiffure make it easy to pick her out of a crowd. “Thank you for the building. We’re super-proud to work here,” one guy says. In the elevator, another volunteers, “We love the building.” As she steps off, he adds, “We recognize you in it.” She says she particularly enjoys working with young people and teaching students. After serving as director of the École Speciale d’Architecture in Paris, she recently founded the Confluence Institute for Innovation and Creative Strategies in Architecture in Lyon. Her mission is to offer training not only in architecture but also in physics, neuroscience, and more—the kind of open, cross-disciplinary education she wishes she had received herself.