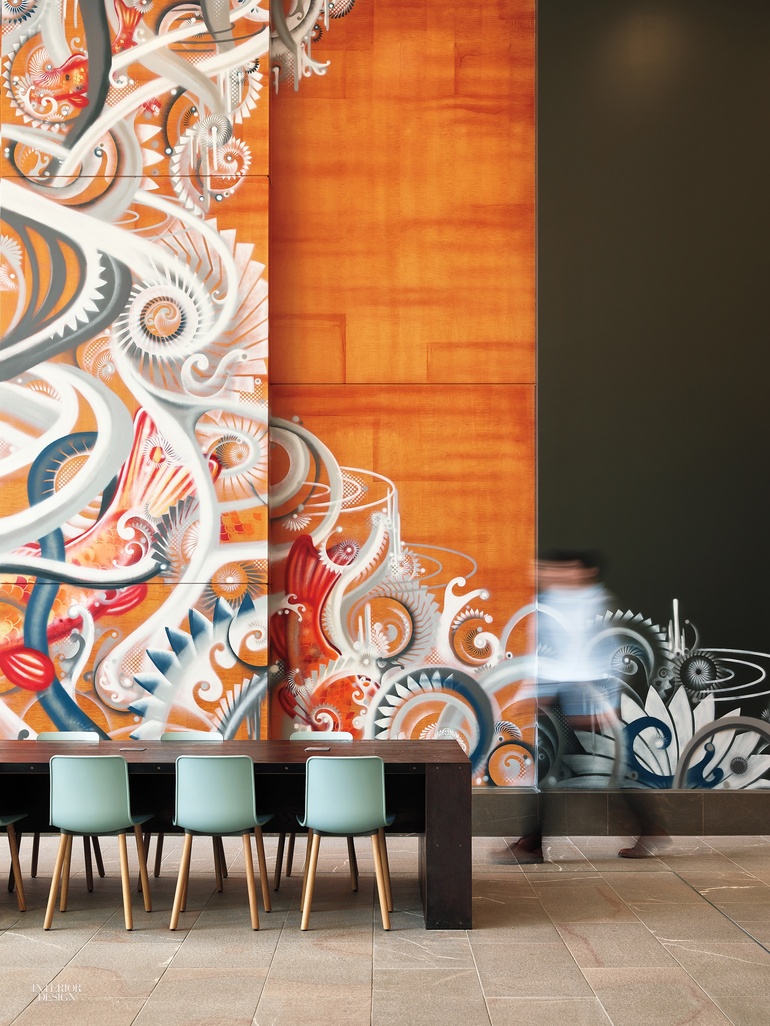 It’s win-win. In a trend we’ve been tracking, designers and commercial real-estate developers are getting even chummier, collaborating to raise the stakes on the lobby game. No longer merely pass-through places, lobbies have become hotel-esque settings. They entice potential tenants to lease, and existing tenants get a perk that might entice them to stay.

Such is the case at the Key Center office tower in Bellevue, Washington, across the water from Seattle. After purchasing the 23-story building, Kilroy Realty Corporation opted to implement changes resulting in LEED Platinum certification and to transform the immense lobby into a “people place,” SKB Architects senior principal Shannon Gaffney recounts. “That’s our thing.”

With 8,100 square feet available, Gaffney continues, “We had enough room to create multiple zones, for instance social/working spaces as extensions of the offices upstairs.” Sure enough, when she informally surveyed tenants to see if they’d use such hangout spots, the response was overwhelmingly positive. “So we did stage-set vignettes, mostly defined by furniture,” she explains. The exact number of zones is seven.

To the side of the lobby, pairs of Hayon Studio wing chairs in sky blue create a tête-à-tête scenario. For a more communal approach, there’s a pair of long stained-oak tables fitted with outlets and lined with Jasper Morrison shell chairs in ice blue. Charcoal-gray sectionals gather in the center of the space. The wide passageway that connects to the elevators features more seating, conversation-pit style. On the passageway’s ceiling, Gaffney achieved a dreamy effect, channeling James Turrell, with paint and fluorescent fixtures.

Paint was an important part of her strategy for making a statement on a limited budget, getting the biggest bang for the buck. The pièce de résistance is what she calls a “wall tattoo,” a swirling composition in vibrant colors spray-painted on existing paneling. Should a new owner want a change, the panels can simply be taken down. Sounds like a developer’s dream.