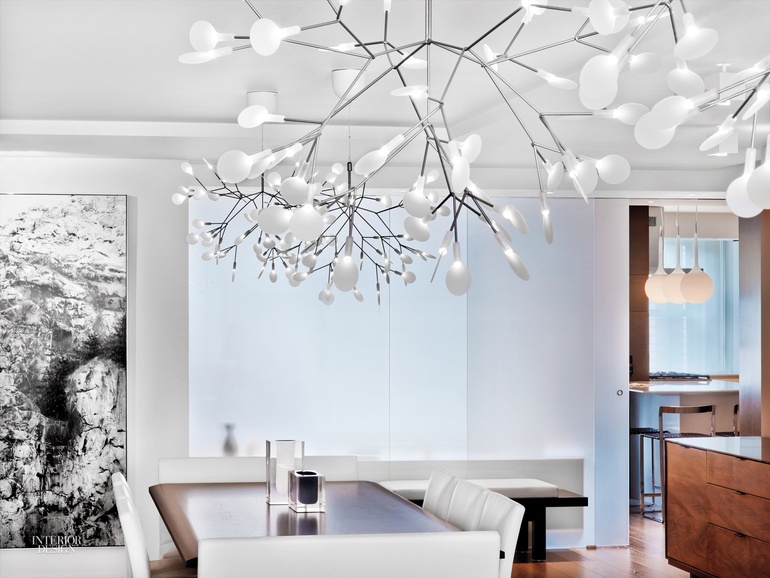 Downsizing isn’t the most glamorous of life passages. Like anything else, though, it can be done poorly, or it can be done well. Luckily for one New York couple of empty-nesters, Interior Design Hall of Fame members Gisue Hariri and Mojgan Hariri know a thing or two about family dynamics—after all, the sisters are now in their fourth decade of running Hariri & Hariri Architecture, having previously studied together at Cornell University. And they used that knowledge to settle the couple into a more compact home while, at the same time, expanding their horizons.

To smooth out what could have been a rough transition, it helped that the architects already knew their clients from working on the spacious prewar apartment that saw them through the school years of a son and a daughter. With the kids gone, the couple set their sights on a 2,100-square-foot replacement in a 1960’s building and got back in touch with the Hariris. “It’s beautiful how they asked us to grow and change with them,” Gisue Hariri says.

Nonetheless, she and her sister were aware of the challenges. The ceiling in the new place, for example, was nearly 3 feet lower than what the couple were accustomed to. Compounding that issue, the old electrical work and mechanicals would have to be removed—and the replacements installed in the ceiling, making for even less headroom. But the Hariris resolved not to let any of that get in the way of a spacious feeling. The broad-based, award-winning portfolio of Hariri & Hariri, which designs everything from arts spaces to hotels and office buildings, has given the sisters a 360-degree view of problems and solutions. Mojgan Hariri told the couple, “Gisue and I are going to make this apartment as beautiful and as comfortable as the  other one, because ultimately it comes down to layout, materials, and vision.” She was true to her word.

Work started with the wrecking ball, as a gut renovation removed most of the walls to make the cookie-cutter interior more loftlike. The tiny kitchen and its separate pantry combined to yield a generous space wrapped in quarter-sawn walnut cabinetry, adjacent to an open den. Still, knowing there was some need for a separation of zones, the Hariris installed a frosted-glass wall, with one sliding panel, between the kitchen-den corner and the more guest-oriented dining and living areas.

As for that low ceiling, it was dropped ingeniously, in a tiered fashion. “It becomes the best part of the project as opposed to the worst,” Gisue Hariri says. Flooring, meanwhile, is mostly oak stained a pale gray. The pristine walls received particular attention, she continues: “They’re floating walls, uninterrupted. No light switches, no base moldings.” And painted a shade of white called Calm. In other words, perfect for bold contemporary art.

The collection leans toward paintings by a roster of international artists, plus a few old New York subway signs mixed in for local flavor. The couple’s son, an artist who’s also an art dealer, contributed several canvases that his parents are especially proud to display. When they realized they could turn their home into a personal museum, Gisue Hariri says, “They got all excited. This is using your apartment to also educate and to help your kid. Wouldn’t we all love to live in a museum?” Pieces could be rotated, their son helping to curate the selections.

With display as a primary mission, the lighting had to be spot-on. Adjustable wall-washers illuminate the paintings. Meanwhile, decorative fixtures tell a parallel story, Mojgan Hariri explains: “Another theme that runs through the whole project is borrowing nature, bringing nature inside.” So the sisters picked Studio Bertjan Pot’s organically branching chandeliers, with the branches terminating in polycarbonate disks. Imagine big, wet, white flower blossoms before they’ve opened.

Bedrooms, the master and a guest room, are “clean and simple,” Gisue Hariri says, yet also luxurious. Bathrooms employ geometric tilework, and the master bathroom’s tub was removed to make way for a sybaritic large shower. You could say the empty nest is now well feathered—in a pared-down sort of way.