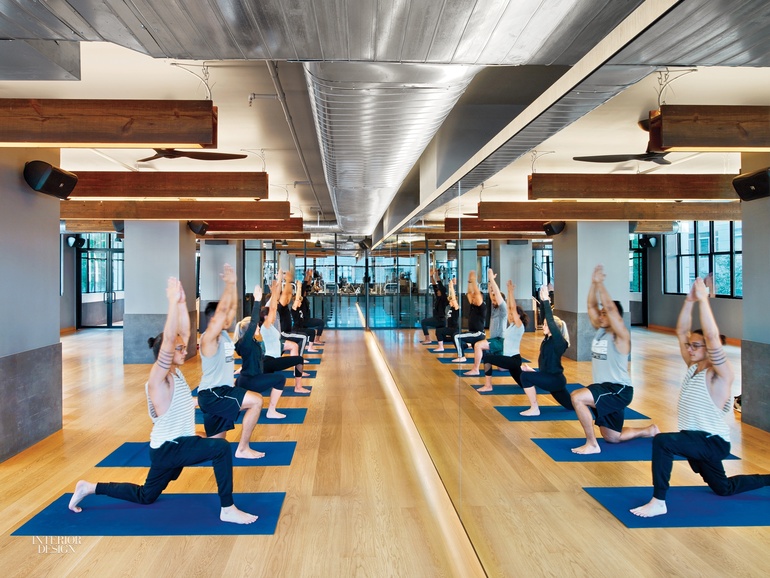 It’s a bit ironic that fitness centers tend not to have the greatest physique themselves. The predominant gym aesthetic is best described as utilitarian, even schlubby, replete with easy-to-scrub finishes, unflattering fluorescent lighting, and militaristic battalions of machines. Maybe, if you’re lucky, there’s a zingy colored accent wall.

Charting a different path entirely is Equinox, the upscale chain that’s cornered the market on style-forward fitness. The brand posits gym-going as a full-blown wellness lifestyle, and 86 branches in the U.S., Canada, and the U.K. uphold that stance via a hospitality-inflected industrial-luxe sensibility that walks the line between studly and sybaritic. Over the years, the in-house design team at Equinox has dialed up that decor to a whole new level by collaborating with high-profile firms.

Inc Architecture & Design masterminded a loftlike outpost in Brooklyn, New York, specifically its warehouse-filled Dumbo neighborhood. Equinox vice president of design Aaron Richter chose the firm, despite its Manhattan base, on account of the partners’ understanding of borough microculture. “When Aaron approached us, we were entrenched in the Brooklyn life, working on a 1 Hotel blocks away,” partner and managing and creative director Adam Rolston explains. “He said the space should look like Equinox but feel like Brooklyn. We knew just what he meant.”

It helped that Equinox is not Inc’s first gym. The firm has designed fitness amenities for numerous high-end residential developments in New York and Washington. However, the Dumbo effort is by far the largest and most complex, 24,000 square feet in a 1940’s cardboard factory that had subsequently housed artists’ lofts before Equinox arrived.

Hewing to the brand concept, major street presence for the upstairs gym derives from a dedicated ground-level entry housing a dramatic staircase and a juice bar at the rear. “A grand stair is definitely an Equinox thing,” Rolston notes—and an Inc thing, too, he adds with a laugh. “The monumental staircase is the architect’s favorite trope!” Here, seducing members to climb, a procession of limber blackened-steel ribbons cradles muscular oak treads. Its form, partner and  studio director Gabriel Benroth notes, pays homage to a Carlo Scarpa design for the Museo di Castelvecchio in Verona, Italy: “Scarpa’s ghost appears in a lot of our work.”

The gym proper feels unexpectedly airy—dare we say aerobic—courtesy of deft spatial maneuvering to preserve sight lines through three window walls. A preliminary floor plan had already been drawn up by the time Inc was retained, but the partners fought to start with a blank slate. “The real-estate broker’s last test-fit had basically become the plan, and Equinox didn’t want to change it,” partner and field director Drew Stuart says. Rolston asides, “I don’t think they expected us to be so architect-y.”

Ultimately, the partners campaigned successfully for what Benroth describes as “a flexible, neutral space, allowing the equipment to be rearranged, and support functions oriented along a full-length spine.” The glass-enclosed group-fitness studio, initially destined for the center of the floor plate, was relocated to a corner, leaving an L-shape workout area blissfully open. Treadmills and other cardio machines are tucked into the far corner. From here, a dogleg connects to rooms for Pilates and cycling. All the exercise zones as well as sales offices, a boutique, a coat check, and locker rooms are connected by a pearl-gray epoxy pathway that unfurls below a parade of black pendant fixtures.

Lighting plays a strong supporting role. Most unusual are linear fixtures that look like wooden beams and are in fact crafted from reclaimed pine—an idea that Inc had come up  with for its own studio. At a meeting there one day, Equinox’s Richter asked, “Can’t we just do these in our space?” The honey-toned timber gives the fluorescents warmth, while a diagonal installation lends dynamism. Supplementing the beam fixtures, continuous cove lighting showcases the disciplined crisscrossing of sprinkler pipes and HVAC ductwork. Much effort and planning went into the exposed mechanicals. “We set the pipes and the ducts to be aesthetically pleasing,” Benroth affirms.

Rolston, Stuart, and Benroth certainly had to strap on their running shoes for the fast-paced project, a mere 10 months from concept to completion. “These days, though, our firm is doing so many long-gestating projects that the speediness was fun,” Stuart says. No sweat.