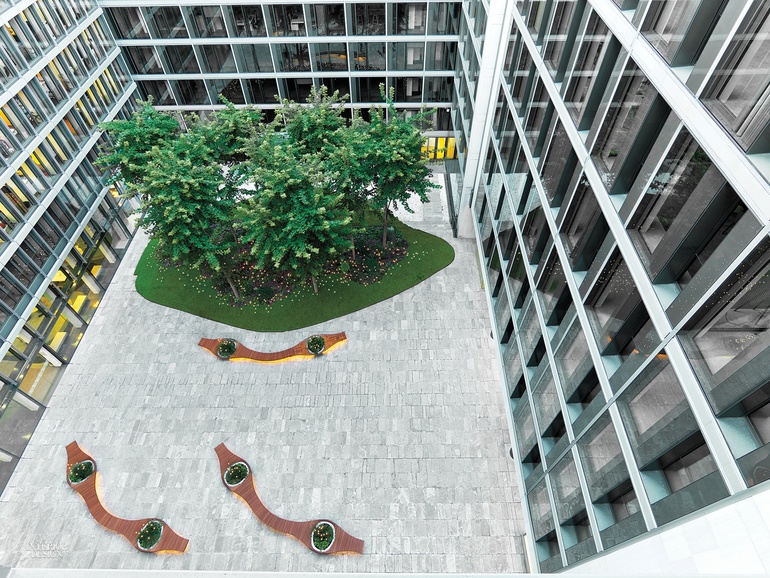 When the French national electric company’s Paris headquarters was eventually converted into a private office complex, it was remodeled to attract the shiny corporate clientele that populates the Golden Triangle, a business district in the Eighth Arrondissement. But a lot can change over time. Capital 8, as the complex was named, was already looking dated when the real-estate developer Unibail-Rodamco commissioned Saguez Workstyle, the office-centric subsidiary of Saguez & Partners, for a polished new identity.

“It had aged quite a bit, the lobby in particular,” Olivier Saguez says. “A decade ago, no one was really into coworking and hoteling spaces. People weren’t connected enough, in terms of technology, to work anywhere they liked.”

So Saguez received carte blanche to create an environment that would cater to mobile work culture and attract executives used to top-level service and amenities. Change is evident, starting at the front entry: The underside of the canopy, formerly lacquered black, is now mirror punctuated by LED strips.

Inside, he adjusted the layout of the ground level, which surrounds several courtyards, to improve flow to services such as a 24/7 concierge desk and three in-house restaurants. To anchor and reconfigure the vast lobby on the far side of the main courtyard, he established several free-floating areas. Loungelike coworking spaces are partially enclosed by bright green glass, actually giant screens that can be programmed to display real-time news, weather, or company information. He calls these glassy elements “digital ice cubes.”

Green is his signature color, representing nature as a primary source of inspiration. For Capital 8, a major objective was to connect with the elegant gardens of the nearby Parc Monceau, around which many of the bankers who financed Baron Haussmann’s 19th-century reinvention of Paris once lived. This approach included matching shades of green paint to living ferns, moss, and lichen. “We took a book of color swatches to the park,” he says.

From the gilded details of the park’s majestic iron gates came the golden yellow of the rugs at the lobby’s two reception desks. “Bringing the outdoors inside is especially important with an enormous office complex like this one,” he adds. Covering almost an entire city block, Capital 8 comprises 667,000 square feet of tenant space as well as 65,000 square feet of open-air space, a luxury in a city as dense as Paris.

Animating the main courtyard’s stone paving are benches custom-designed by a landscaping consultant. Their organic shapes, swelling to incorporate round planters, are made of locally sourced sustainable acacia wood. One bench sits adjacent to an island of greenery, a grassy oasis sprouting trees, shrubs, and LEDs that glow like fireflies. “It’s important to get outside, to make a phone call, to recharge, to breathe,” he says. “Work is stressful. Nature is calming. The more we are stressed, the more important nature is.”

To warm up the linearity of the lobby and its preponderance of chilly marble, metal, and glass, he outfitted the multiple zones with seating options that include upholstered banquettes, armchairs, and ottomans, plus plenty of electrical outlets and device-chargers discreetly built in. “Common spaces should be welcoming, lively, and spontaneous,” he says. A self-service coffee bar, offering a selection of newspapers and magazines, and a small “beauty lounge,” with a flatteringly lit makeup mirror, contribute to an atmosphere of quiet pampering.

The emphasis on user-friendliness carries through upstairs, at the marketing suite for prospective tenants. Visitors stepping off the elevator don’t arrive at the standard reception desk. Instead, there’s a waiting area separated by only an open bookcase from the rest of the space, which resembles a tenant-occupied office—from the workstations and conference rooms to the high-sided love seats for those in search of a little me time. “The client asked for a range of environments that would appeal to investment banks, law firms, and luxury brands. It had to be chic and upscale, not ostentatious,” he notes.

On the conference rooms’ glass enclosures, adhesive film demonstrates how supergraphics can provide subtle branding opportunities. On the floor, plush carpet sports a curvy, mod pattern that looks like it could have come straight from the era when the complex was constructed. Aside from that abstract 1960’s reference and the view out the windows, the electric company’s employees would never recognize the place.