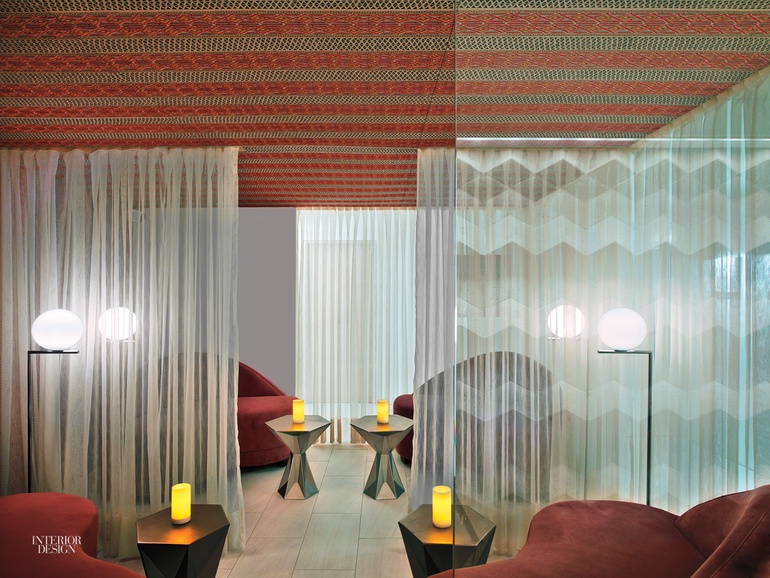 She had never been to Colombia. Her Spanish? Un poquito. In fact, the only thing she knew about the country came courtesy of the Netflix series Narcos. “It was enough to scare you to death,” she says with a laugh.

No doubt that Interior Design Hall of Fame member Lauren Rottet is intrepid. So much so that Rottet Studio tackled not one but two Four Seasons Hotels Limited properties in Bogotá... simultaneously. The larger and more centrally located one, in the hopping Zona Rosa district, is the Four Seasons Hotel Bogotá. It comprises a row of three 1980’s brick buildings vaguely neoclassical in style and long operated as a different hotel. Once Four Seasons signed on, the doors closed for 16 months while Rottet and senior associate Chris Evans flew in from the U.S. to work their magic.

It starts outside with the new entry’s limestone steps, sheltered by a steel canopy. Rottet and Evans moved the lobby from the back to the street front, testimony to Colombia’s increasing safety. But the rest of the interior layout remains out of the ordinary, because the buildings, a pair of them five stories and the other seven, are connected only at lobby level. After check-in, guests proceed to whichever elevator or staircase serves the building where their particular accommodations are. Since each level of each building offers a maximum of seven units, most of them suites, Rottet notes, “They’re like your own pied-à-terre.” The key count is just 65, retained from the original.

To say that she and Evans were pleasantly surprised by Bogotá is an understatement. “The people are committed to the city. It’s full of wonderful restaurants with interesting fusion cuisines,” she says. It’s a shopping mecca, too, particularly for crafts: wood carvings, textiles, rugs of the woven metal and hair-on-hide varieties, you name it. Many of which became rich components of the Four Seasons project. Knowing Rottet, let’s not forget fashion’s part to play either. (More on that soon.) Evans concurs with her thumbs-up assessment: “Bogotá is quite fast-paced, like the New York of South America.” And the country as a whole is a sensory environment, overflowing with sources of inspiration. Say “Colombia,” and you might think emeralds or rain forests. Ergo the hotel’s brilliant shades of green. References to tropical flora translate into deep red and fuchsia tones.

Among Colombian artisans, wood carvers reign supreme. So Rottet put them to the test, making latticed screens from indigenous cedar. Backed with mirror, they line a long wall and form a canopy in the lobby to impart a sense of volume to a height-challenged area—its ceiling is less than 9 feet. As a counter-point to the lightness of the latticework, a hefty slab of pink-veined green marble tops the reception desk, which is cleverly lodged between two structural columns that might otherwise seem a looming inconvenience. Lobby color comes from lounge seating, upholstered in indigo, blush, or striated green.

Starting in front of the lobby, the café wraps around the side to terminate at a window wall overlooking a newly planted rear courtyard. “The wall was originally solid. We carved it out,” Evans explains. Above the banquette, something shimmers. Closer inspection of the chevron-patterned strip reveals another artisanal contribution, this time writ small: beadwork, which is embedded in Colombia’s culture. Rottet, always on the hunt for a fashionable accessory, acquired a beaded handbag locally, then adapted its pattern for wall covering. Meanwhile, a wall covering that references traditional encaustic tile lines the stairwell descending two levels underground, to the spa. (A Four Seasons without a spa? Unthinkable.) This one is lush and textural, not stark and clinical. Glass mosaic tile in varying shades of green forms an oval set into the reception area’s floor. In the relaxation room, the stripes of the fabric cladding partitions and the ceiling evokes thick rope.

Return from relaxation to business in the conference center. Leave it to Rottet to accidentally discover a Colombian artist in a nearby gallery and immediately decide to have his figure-eight wire sculptures installed on the boardroom wall. Now the circle is complete. Art, craft, and fashion coalesce.