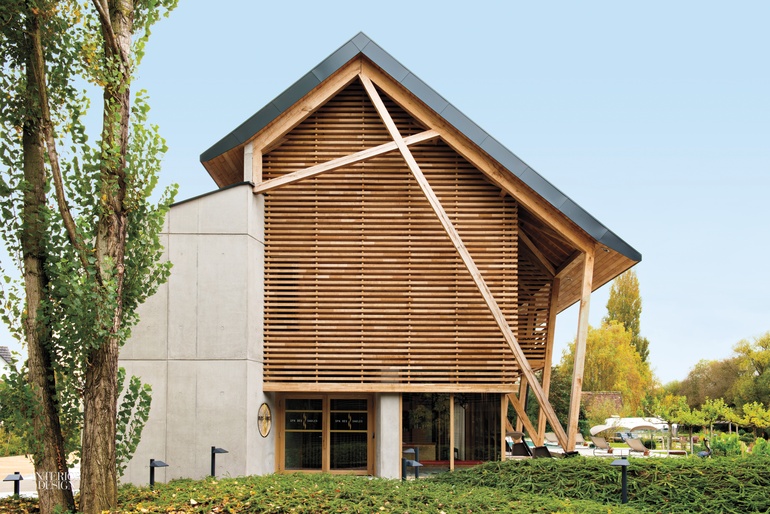 Take the form of an old timber barn traditional in Alsace. Add a trace of the region’s ancient Roman baths, a soupçon of American Shaker style, an aura of Zen, the savoir faire of local artisans, some high-tech spice, and tons of contemporary zest. Mix well. That’s the design recipe for Jouin Manku’s ground-up annex for the Hôtel des Berges in Illhaeusern, France—a hotel that’s renowned for its restaurant, the Auberge de l’Ill.

Even in the rarefied world of multi-starred cuisine, the Auberge de l'Ill is exceptional. One of France’s most beloved gastronomic institutions, the family-run restaurant was opened in 1882 on the banks of the river Ill by Frédéric Haeberlin as a modest country inn, the cooking done initially by his wife and eventually by their daughter and daughter-in-law. Under grandson Paul Haeberlin, the restaurant won its first Michelin star in 1952, the second in 1957, and the third in 1967. Today, his son, fourth-generation chef Marc Haeberlin, is in the kitchen, with his sister, Danielle Baumann, directing the restaurant and her husband, Marco, running the hotel. And eight members of the fifth generation are already at work throughout the property.

Interior Design Hall of Fame members Patrick Jouin and Sanjit Manku renovated the Auberge de l’Ill in 2007. In 2014 in nearby Strasbourg, they turned part of an 18th-century royal stud farm into Marc Haeberlin’s fourth restaurant, Les Haras. So when the family decided to enlarge the Hôtel des Berges and add a spa, client-designer trust was well established. “They essentially gave us carte blanche,” Jouin says. The sole requirement for this third collaboration, Manku adds, was for the annex to be both “sensory and spiritual,” a retreat for the body and soul. Jouin continues, “They had a really profound desire to do more for their guests, to give them serenity and calm, a place to contemplate nature.”

To represent the Alsatian vernacular, Jouin and Manku channeled not just the fairy-tale half-timbered houses, overflowing with geraniums, but also the long, narrow barns originally used for drying tobacco. The steeply pitched roof of the annex is typical, while most of the exterior is wrapped in oak slats. On one long elevation, the oak slats front a row of upper balconies supported by oak columns and protected by the roof overhang. A reflection of this composition seems to float on the water of the hotel’s lap pool, lined in stainless steel.

The materials palette for the 17,000-square-foot annex interior, split between the ground-level spa and the upstairs guest accommodations, is pared down to the essentials: wood, stone, and concrete. Pouring the concrete was the project’s biggest challenge. “It leaves no margin for error,” Jouin notes. “You cannot correct a mistake.”

On some concrete wall panels, a delicate willow-leaf motif pays tribute to the weeping willows that gave the Spa des Saules its name. The spa lounge’s internally heated seating takes the shape of an oversize boomerang, formed by spraying concrete onto a frame. Minimal ornamentation also includes oak slatted panels.

Four rooms for treatments—one option is a willow-bark oil massage—are supplemented by a sauna and a steam bath. They’re reached via a large room with two plunge pools running down the center. One pool is a chilly 55 degrees Fahrenheit. The other, warmed to 100 degrees, flows beneath a window wall at the far end, into a hot tub.

For a more private outdoor experience, seeing out but not being seen, each of the building’s balconies belongs to one of the five junior suites. Their interiors are nearly identical, 430 square feet with 23-foot cathedral ceilings, of course in oak. “The large volumes determined everything,” Jouin says. Freestanding king-size beds have extra-tall headboards covered in fabric that adds a rare splash of color: turquoise, terra-cotta. The headboards furthermore integrate side tables and lighting and serve as dividers, separating the sleeping quarters from the dressing areas and bathrooms. Furniture is almost all custom, with a noticeable lack of handles, knobs, or hinges.

Beyond the suites, a meditation room, or “chapel,” has a vaulted ceiling and, along one side, a series of niches, cocoons of solitude. The room is also discreetly designed for a state-of-the-art sound system, invisible projectors for videos and still photography, and an electronic piano. “Contemporary can go very well with traditional,” Manku says. “There is a beautiful sophistication.”

New will once again rhyme with old for yet another Hôtel des Berges project that Jouin Manku is currently completing—a second renovation of the Auberge de l’Ill restaurant is slated to be unveiled in March. This time, the design will feature an update of the Alsatian art of marquetry.