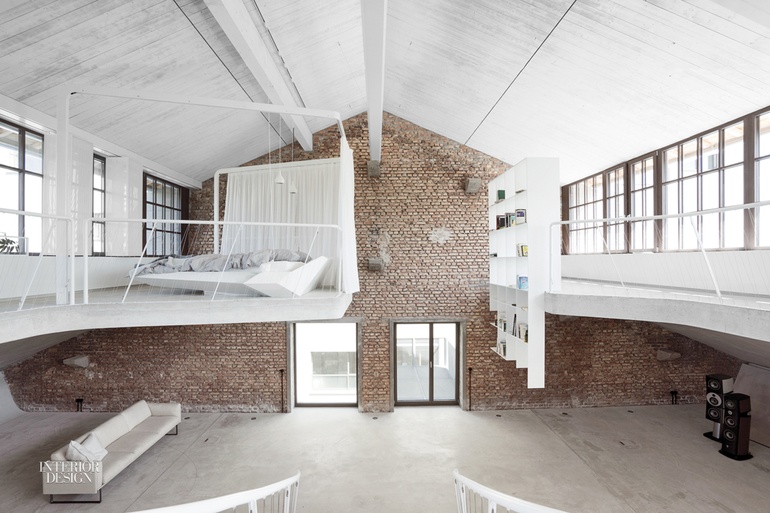 Originality may be celebrated, but it’s not always enough to get a project done. After winning a competition to renovate a loft, a duplex in a 1939 brick repair shop for army tanks, principals Philipp Buxbaum and Christian Kircher wondered if their design could actually be built. “It was so far out there,” Kircher admits. “We thought we had a 1 percent chance.” That’s because the most important feature of the 3,800-square-foot space was to be a strikingly slender split staircase, constructed with poured concrete at a structurally challenging 3 inches thick.

In terms of function, the staircase would ascend to opposing mezzanines, one for sleeping and the other for lounging. This split would allow sunshine and Alpine views from the industrial ribbon windows to reach the lower level while preserving a central volume with a 23-foot-high cathedral ceiling—a dramatic location for an ash-clad bathroom with a sunken tub. In terms of visuals, the stair would define function zones.

To make this idea a reality, it helped to have a real-estate developer client who not only said yes but could also problem-solve. “We had approached both 3-D printers and woodworking shops that could make board forms for the concrete, but the bids were breathtaking,” Buxbaum says. So the client wrangled three carpenters who did the job, within budget, in just three weeks.