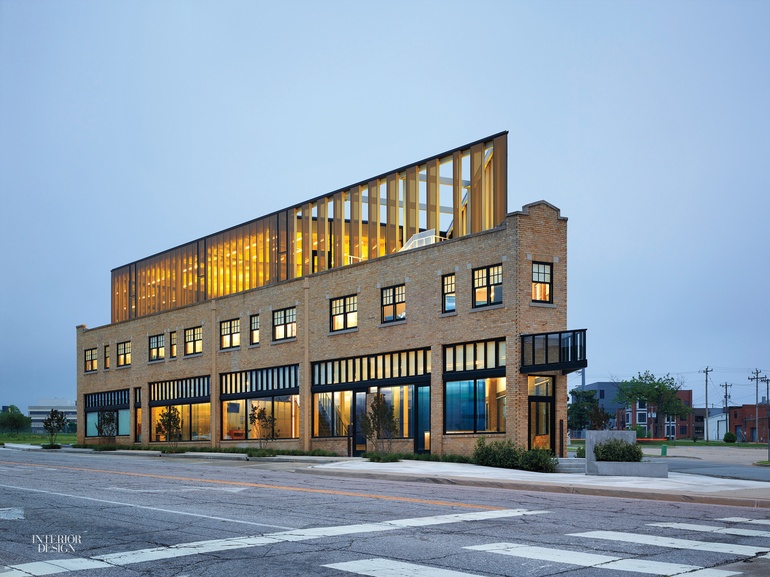 The most famous Flatiron Building is the New York icon by D.H Burnham and Company. But Oklahoma has a version, too, completed a couple of decades later: a triangular hotel in blond brick and painted steel. Leave it to Interior Design Hall of Fame member Rand Elliott to transform this long-abandoned landmark into a lantern of delight, in his words “a project with soul.” Hired by a company that insures medical professionals, he converted the building into office space and added a penthouse for a total of 20,000 square feet.

Outside, the building was in surprisingly good shape. Bricks, each stamped 1924, and corner-weaving details were intact, requiring just a cleaning. Windows were simply replaced. Inside was another story. He exposed structural elements, then left them visible through new partitions of translucent polycarbonate for what he calls “a historical building lesson.”

Workstations for the 29 employees now occupy the two original levels. For conference rooms, an events space, a pantry, and access to a roof terrace, proceed to the penthouse. “The existing roof couldn’t carry the weight of the addition, so we drilled down to insert independent supports,” he explains. Set back from the perimeter on all three sides, the penthouse’s amber-tinted glass walls seem to float. Think of the effect as Elliott’s ode to past, present, and future.