Markzeff: 2016 Best of Year Winner for Firm's Own Office 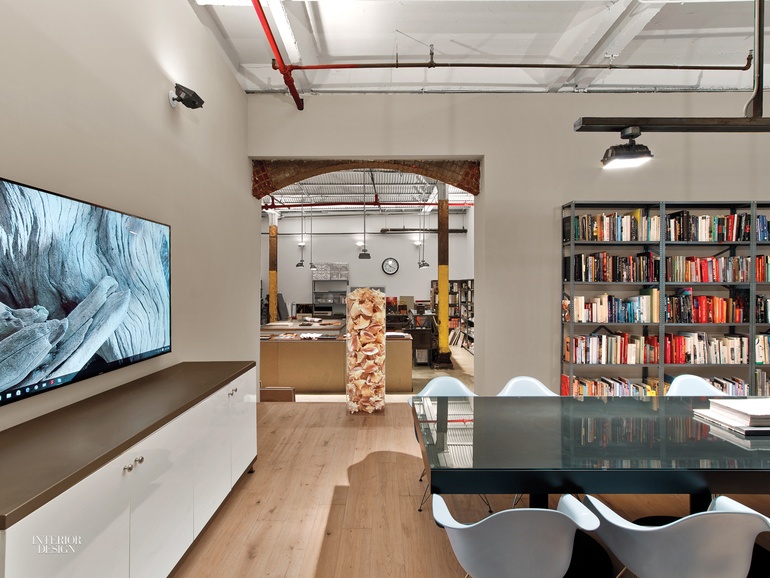 A century ago, factories flourished and warehouses sprawled along the waterfront between the Brooklyn and Manhattan Bridges. Today, the industrial buildings are witnessing a new wave of prosperity, with glassy apartments rising all around. So when Mark Zeff decided to relocate, it made sense to go where the action is. He set his sights on a ground-level location, one large enough to accommodate not only his firm but also a home store, an offshoot of his Blackbarn brand.

One particular warehouse, circa 1920, offered 6,800 square feet entered via a disused loading dock, which became the shop. A few steps up, it turns into more of a showroom comprising a gleaming prototype kitchen and dining area. “Clients, whether they’re here for hotel or residential work, walk through an environment that inspires them,” he says. In the wide vestibule beyond, a massive original pine door hangs from a ceiling track near a discreet sign for the office.

Most transformed is the skylit studio at the very back. He had initially planned to paint it black, in keeping with the Blackbarn theme, but natural plywood appealed to him. “We painted it half-black, just for the fun of it,” he says. The result is a mix of rough and refined that suits the old-meets-new ethos of his adopted neighborhood.