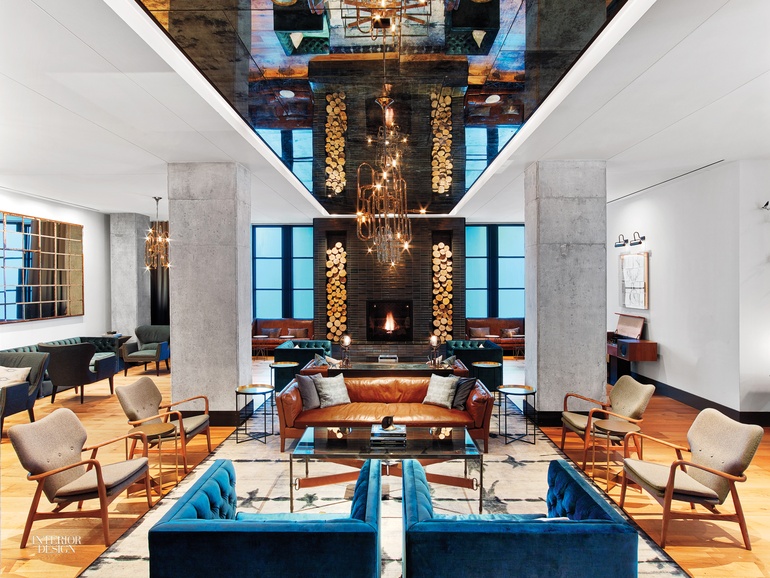 The soulful folk rock of the late Townes Van Zandt has been an inspiration to Bob Dylan, Neil Young, Norah Jones, and scores of other musicians. Van Zandt’s reach has now extended to design in the form of the Hotel Van Zandt—located in a city that sits at the booming intersection of hipsters and honky-tonks, techies and tequila. That combination held obvious attractions for the Kimpton Hotel & Restaurant Group, which had previously hired Mark Zeff’s firm for restaurants and now returned to him for what would be his first commission in the Lone Star State.

Zeff looked to the Austin music scene to lay down the baseline. His homage plays out in the lobby lounge with artist Paul Villinski’s installation of birds made from cut-up vinyl records fluttering out of an 1906 phonograph. Van Zandt’s final album, No Deeper Blue, symbolically thrums through the hotel’s color palette as a moody teal. Riffs on blue are found everywhere from the lounge’s tufted velvet-covered seating to the 319 guest rooms, where the wall covering evokes dreamy water­color brushstrokes.

Van Zandt’s son JT, who creates his artwork by boring holes in slabs of wood, contributed several pieces. There are two portraits of Van Zandt, senior, one of a stern-looking Comanche chief, and another of a 19th-century boy with a cigarette dangling from his mouth.