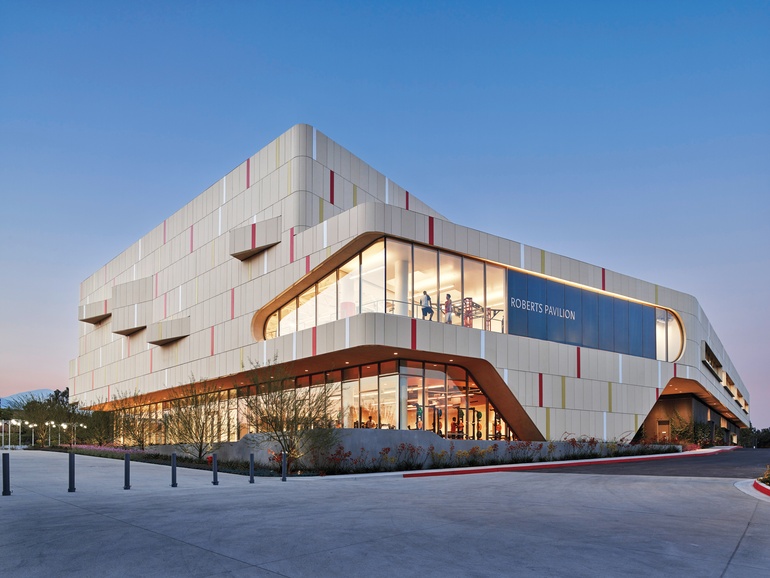 When is a gym not just a gym? When it’s a campus hub for meet-ups, study groups, and numerous college organizations in addition to the expected basketball games and workouts. “In fact, that was our charge,” Alice Kimm says of the ground-up pavilion, its three-story, 144,000-square-foot form as dynamic as the activities it houses.

The triple-height venue for the basketball court is underground. Other functions, such as the gym and the dance studio, are above, hugging the perimeter, to benefit from the sunlight. It’s absolutely everywhere, because Kimm and her husband, John Friedman, regard it as a building material, albeit an intangible one. “We care about it a lot, both coming from the top and with transparencies for exterior and interior partition walls,” Friedman adds. That explains the facade’s abundant windows.

Glass aside, the facade’s system of terra-cotta panels helped to create the building’s energetic curves. The creamy surface is punctuated by vertical strips in the college colors, cardinal red and golden yellow, as well as white. For graphic interest inside, high on a wall of the atrium where the reception area is located, the college’s name is spelled out, in relief, against a backdrop of letters, symbols, and words from the 10 languages most commonly used on campus. How were those languages determined? Through crowdsourcing.