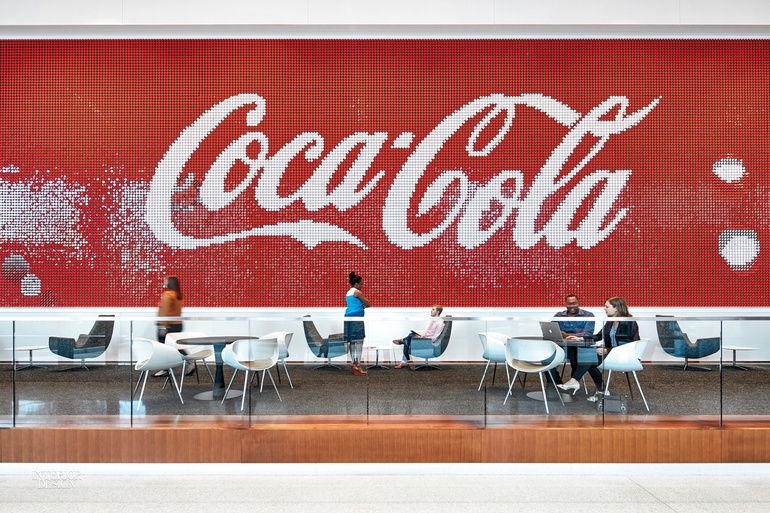 Authenticity has long been prized at the Coca-Cola Company, starting with that classic “contour” soda bottle that Andy Warhol loved so dearly. “They like to say they’re a curvy company,” Gensler design director Michael Lutz explains. He therefore used those curves and other brand hallmarks to reinvent the two lower levels of the buildings that make up the Atlanta headquarters. A ribbon of shared amenities as well as a circulation path, the combined 350,000 square feet represent just one part of a visionary 10-year plan—and also won Gensler's Design Excellence Award for a large built workplace. The project furthermore included an outdoor component, a central courtyard that, like many similar campus spaces, had once been underutilized, as employees tended to stick to whichever tower they were assigned. The courtyard now pulses with the energy of sinuous islands of vegetation.

Back indoors, the ribbon’s lobbies, cafeterias, cafés, corridors, and more have given Coke a fresh public face at an extraordinary scale. Lobbies boast contemporary accents often in red-and-white. A highlight is the main lobby’s pair of spectacular double-height feature walls composed of thousands of disks—red on one side, white on the other—that are individually computer-controlled to flip, displaying different company messaging. “It brings the brand to life,” Lutz says. In another lobby, the existing pink stone and pastel-toned tapestries have disappeared to make way for ever changing Coke imagery that appears in waterfalls’ sheets of droplets, thanks to programmed valves.

To encourage collaboration, he added varied seating throughout: booths and nooks in reception spaces, groups of lounge chairs in corridors, bench desks in cafés. A cafeteria’s paneling is a patchwork of reclaimed barn wood that was painted by an artist to recall roadside advertising for Coke. Elsewhere, bold vinyl wall coverings reproduce graphics commissioned from cutting-edge designers to toast 100 years of the contour bottle. A round circulation node features real-time social-media feeds on red ticker screens, recalling artist Barbara Kruger. The floor there is terrazzo that incorporates smashed Coke bottle glass—with the occasional telling fleck of a red label.