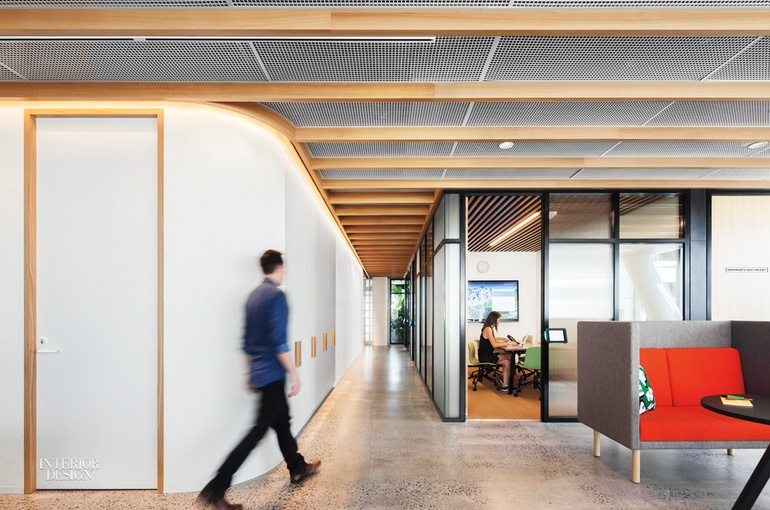 They have a surprising amount in common. “We are both large global organizations. But our Sydney offices are small and boutique in feel,” Gensler managing director and senior associate Simon Trude explains of the Australian outpost he designed for Dropbox, which won Gensler's Design Excellence Award for a small built workplace for a technology company.

And quite a technology company it is. One in two Internet users in Australia has shared a digital file through Dropbox, facilities operations manager Rachel Johns says. The fast-growing Sydney satellite had been bunking in temporary digs for two years before finally securing a permanent home for 50 staffers: 21,500 square feet in a tony building in “tech alley,” where neighbors include Apple and WeWork Companies.

Trude won the commission with his concept From House to Home. Accordingly, the space is designed to approximate the flow and ambience of a residence, albeit tweaked to suit workplace needs. Near the reception desk, glass doors allow guests to survey activity beyond. “It’s like looking through someone’s front window,” he says. One half of the floor plate offers a “kitchen” café and a “living room” lounge furnished with homey seating, while the other half is dominated by the obligatory bench desking. To make up for the lack of outdoor access, so prized in Sydney, he faked a “courtyard” complete with garden furniture and abundant greenery.

“The importance of conjuring delight is a corporate value at Dropbox,” Johns says. Delightful indeed are the blown-up photographs by a surfer and blogger whose Bondi Beach snapshots have made him a bona fide local icon. His images of turquoise-bright ocean waves crash over all manner of office surfaces, from feature walls to the Ping-Pong table. How did he deliver the files to Gensler graphic designer Danny Wehbe? Of course, via Dropbox.