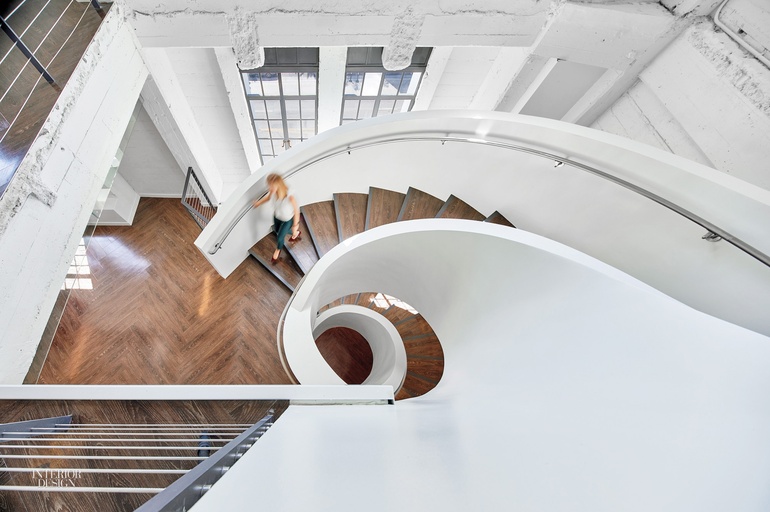 A longtime a beacon for Glendale, California, the Masonic Temple had stood derelict for decades until Caruso Affiliated came to the rescue. The real-estate developer quickly secured a tenant for the top levels of the nine-story art deco landmark: CBRE, a longtime Gensler client. The two have now collaborated on over two dozen offices internationally.

In addition to overseeing the commercial real-estate giant’s own premises, Gensler was retained to rehab the entire building. The project encompassed shell and core work including seismic and other structural upgrades. Overall, the challenge was to “celebrate the historical status of the building while reinventing it for today,” senior associate and design director Lindsay Malison explains. She completed the project with Carlos Posada, principal and regional practice-area leader for clients in professional services—and the pair were recognized with Gensler's Design Excellence Award for a small built workplace resulting from adaptive reuse.

CBRE maintains a “free address” policy, allowing the 125 employees to sit where they like. Inviting vertical flow between the four levels, including expanded mezzanines, that now compose the 25,000 square feet are various staircases. One, a nautilus-like construction, spirals upward to connect the three lower levels. From there, you can reach the top by taking a flight of floating steel stairs or the plywood-and-steel steps that integrate bleacher-style seating.

That top mezzanine, hugging the building perimeter, accommodates the reception “concierge” and glass-box conference rooms. With the blessing of the city’s Historic Preservation Commission, Posada and Malison installed 20-foot-tall windows on three exposures, facing downtown Los Angeles and the San Gabriel Mountains. Beneath the mezzanine are rows of workstations, leaving the center of the floor open to a cathedral ceiling that soars 26 feet high above elegantly restored trusses.

The central volume is a lounge, and its centerpiece is a boomerang-shape bar. Pull up a few stools for an ad hoc meeting. Or an evening cocktail.