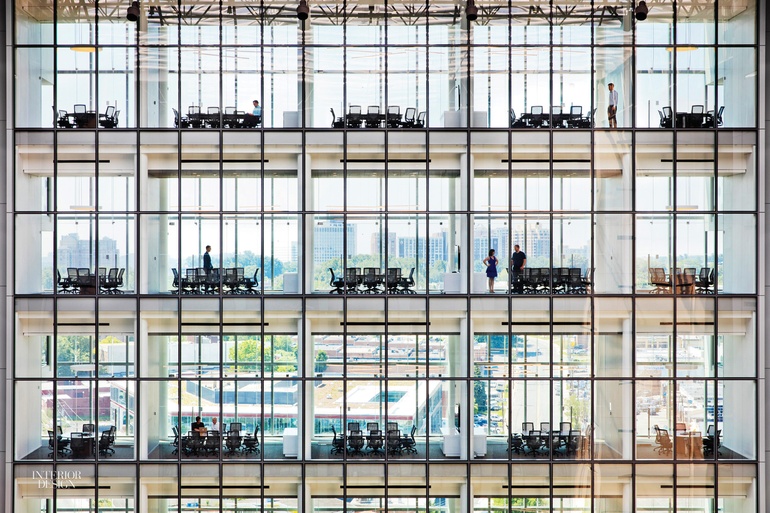 Giving an office building the shape of a capital “E” perhaps seemed like a good idea at the time: The three narrow wings, jutting from a single spine, would provide daylight equality. In reality, however, employees found themselves logging endless miles, hustling down one dead-end corridor of closed-door suites, then up another.

Upgrading the E plan to a Class A, with LEED Platinum certification to boot, has drastically improved the efficiency of the 1970’s structure, occupied by a government agency. The renovation also brought major recognition to Gensler design director and principal Jill Goebel, design leader for the Southeast region. She earned Gensler's Design Excellence Award for a large built project that’s community-oriented.

The 1.5 million-square-foot renovation took five years. And it was all the trickier because the agency’s 4,500 employees stayed in place. A few empty office areas and suites served as swing space while all four departments were sealed off behind a temporary ribbon wall.

Goebel’s stroke of genius involved two of the wings. She took the outdoor space between them, enclosed the open end, and capped the resulting courtyard with a skylight. What had once been a “dreadful, nasty canyon of brown surfacing,” as she describes it, was vanquished to create an animated atrium.

Even more innovative, the atrium’s end wall is actually a curtain-wall sandwich, enclosing rows of meeting rooms. Sunshine can penetrate this supersize grid to light the atrium. The corridors alongside the meeting rooms furthermore bridge the former dead-end wings to either side.

Down on the atrium’s floor, civil servants hold informal meetings on groups of upholstered banquettes, and pergolas shelter a cafeteria. “Sitting at the bottom of a 13-story volume might theoretically not feel great,” she says. “But the trellis elements give you a feeling of shelter, a cozy nook within a grand space.”

This welcoming gathering spot represents the most tangible shift in the workplace culture. “People are incredibly energized, embracing it like crazy,” she reports. They have been giving the atrium the ultimate stamp of approval—by taking selfies there