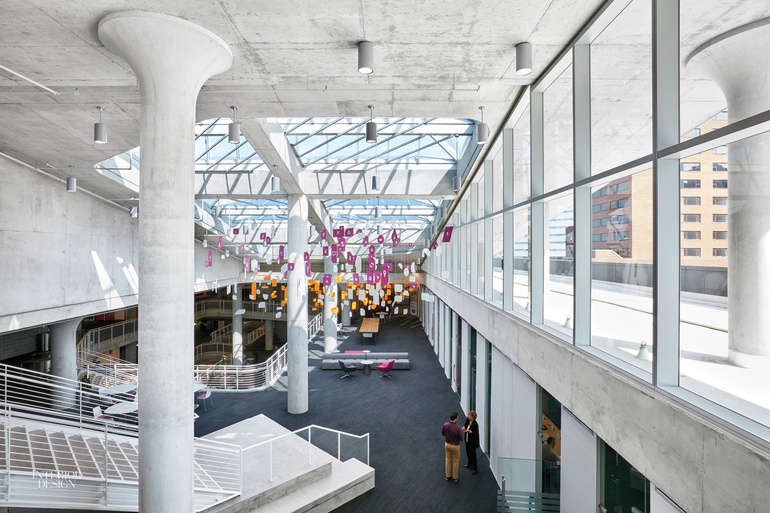 It might be easy, in the suburbs, to design a corporate headquarters with room to grow. Not so within the tight constraints of an urban infill site, a former parking lot on a corner of Cincinnati’s burgeoning downtown. Gensler principal and firm-wide leader for consumer goods Todd Heiser and senior associate and design architect Tim Jacobson had to dig deep for ideas. Literally. “To make a building inherently expandable meant, in this case, expanding down,” Jacobson says of the resulting development, which won him and Heiser one of Gensler's Design Excellence Awards for a large built community-oriented project.

A partnership between the city of Cincinnati, the nonprofit developer 3CDC, and anchor tenant 84.51°, named for its longitude, yielded 840,000 square feet on nine levels. That encompasses four office levels totaling 250,000 square feet for 84.51°, plus retail at street level and parking both underground and above-ground. The three aboveground parking levels are where the real innovative thinking came in. If 84.51°— which handles consumer analytics for its parent company, Kroger Company supermarkets—needs to expand in the future, Jacobson explains, “The garage is designed to become offices.” It’s therefore endowed with the same high ceilings and the same concrete mushroom columns for a cohesive interior vocabulary.

The only major difference is that today’s parking levels don’t benefit from the skylit atrium above. It slices through the massive floor plates at 84.51°, bringing in natural light and enhancing connectivity between the levels. Around the atrium, meeting rooms and cafes attract employees from different office neighborhoods. “These are authentic moments when people come together,” Heiser says. Amenity spaces furthermore reflect the culture and history both of Cincinnati and of 84.51°. Robust concrete, steel, and oak throughout pay homage to the city’s industrial roots, and its brewing history inspired the pressed-tin ceiling tile of a lounge. Meanwhile, the pantries are called Tea Spots in a nod to the London kitchen where 84.51°’s predecessor company got its start.