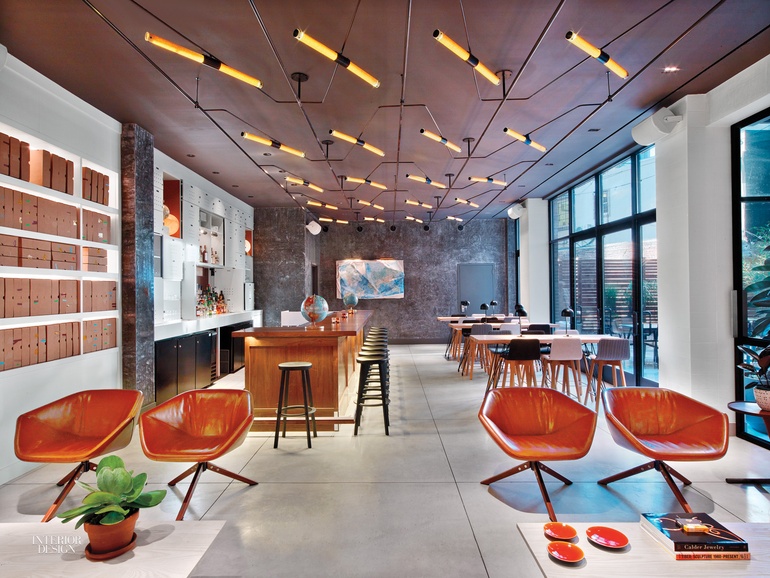 How’s this for a scenario? A hotel brand makes its debut by hiring a design firm that’s relatively new to the hotel genre, despite being a restaurant specialist extraordinaire. And the property is in New York, possibly the most cutthroat market in the U.S. if not in the world. Recipe for disaster? Not at all, as it turns out. The point man on the interiors of the Arlo Hudson Square, AvroKO chief creative officer Matthew Goodrich, found the leap into unfamiliar territory invigorating, even though, he admits, “It’s like opening on Broadway without ever having performed anywhere else.”

The Arlo Hudson Square and the slightly smaller Arlo NoMad are owned by Quadrum Global. And both are part of the growing micro-hotel trend, offering value prices for tiny guest rooms intended less as a place to spend time than as what Goodrich calls a “launching pad” to explore an exciting city. “The exchange is that there are much larger public spaces to meet the needs of guests who might otherwise have stayed up in their own rooms.”

Addressing the givens of the 11-story building by Gene Kaufman Architect, which also collaborated with AvroKO on the 1 Hotel Central Park, Goodrich had to grapple with the size of the 325 guest rooms, an average 150 square feet. “One of the first things we did was to tape them out,” he recalls. “They looked so tiny.” He asked himself, “What can we eliminate? What is most important to have?” The answer was rooms that feel fitted, like a luxury train compartment or a ship’s cabin. There’s an almost Japanese sense of efficiency. However, a key reason for the scheme’s success is that it isn’t solely subtractive. “If we’re going to reduce the size, we have to offer pluses,” he states. “We have to seduce you.”

In almost all the rooms, the entry point is actually the bathroom. The integral sink-vanity is out in the open, but its stone composite material “doesn’t scream bathroom, like glaring white porcelain,” he notes. Opposite the sink, a single sliding door fronts a separate enclosure for the shower and toilet, making the setup seem less piecemeal. The top and bottom of the slider are furthermore transparent, so sight lines extend as far as possible. Beyond the bathroom, a wall-mounted desk folds out. Some rooms have an ingenious bunk bed with flat-screen TVs installed at the footboards. “Everything does as much work as it can,” Goodrich continues. In other rooms, the king-size bed fits right against the window, with zero clearance on three sides, since research predicted that many guests would be single travelers. Regardless of the bed style, there’s storage underneath for suitcases, as in any tidy New York apartment.

The hotel’s public spaces, meanwhile, are intended to be useful for something more than just grabbing a drink. They should encourage personal connections, he says, just like two of the greatest high-culture communities: “Our inspirations were the MacDowell Colony and Black Mountain College.” He also commissioned local artists to produce unique installations. In reception, for example, shelves are lined with hundreds of archive boxes painted a yellow that’s a mixture of taxi cab and National Geographic, and guests are encouraged to fill the boxes with notes about the hotel expe­rience, creating a sort of time capsule.

In keeping with the idea that the common areas had to offer more than the usual hotel fare, no expense was spared on the furniture. “This project includes the highest level of furniture I’ve ever gotten the opportunity to specify,” he adds, pointing to the library’s Jens Risom chairs. With the custom designs, sunny practicality comes through in the details. The penthouse bar’s booths are separated by perforated aluminum screens that can be removed to reconfigure the space for events.

For finishes, he says he tried to avoid today’s clichés: “We weren’t going to use all black-and-steel. There are a lot of crisp, lighter surfaces.” Though he did employ some trendy reclaimed Douglas fir strips, he also worked in a paler elm veneer. As for the considerable amount of bright white tile, it manages to look inviting rather than antiseptic. Pale gray polished concrete flooring brightens up the lobby, which he calls “very much a day space but one that that works beautifully at night, too.” A cabinet is chock-full of vintage globes that occasionally come out to rest on the bar counter, helping you plan your onward journey.