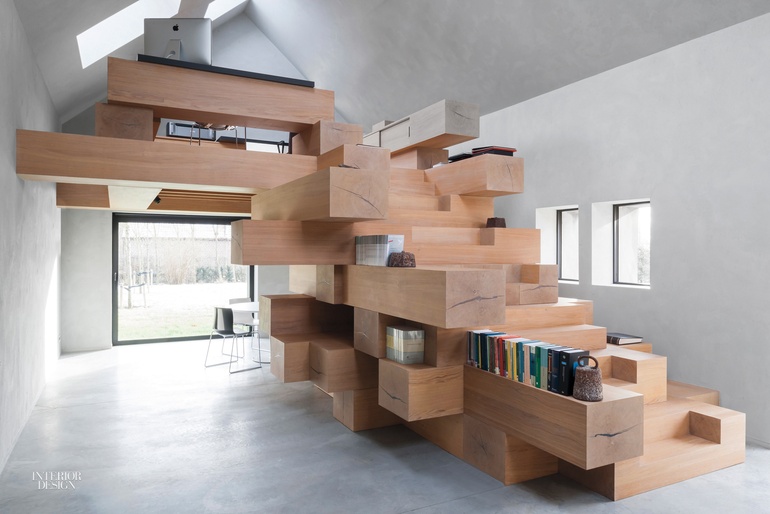 Both historical and avant-garde, functional and sculptural, material and abstract, an 18th-century Belgian stable converted into a home office by Studio Farris Architects is a place where work is a pleasure. “Quality of life is very important, and archi­tecture has the power to influence it,” Giuseppe Farris says. “Particularly to make people not only more productive but also happier while working.”

Farris’s own work on the project, located in the historic city of Bruges, first entailed removing the hayloft and partitions inside the stable, lining the resulting shell in concrete, restoring exterior brick, and cutting skylights and additional windows. “Emptying the volume made it possible to feel the whole space, as if you were in a chapel,” he explains. Then he assembled an irregular stack of oak beams that stretches nearly half the length of the 1,000-­square-foot interior.

The oak monolith resembles contemporary sculpture, a sort of Donald Judd meets Richard Serra. However, Farris speaks in more pragmatic terms of an “auton­omous furniture object” that handles all office functions “without closing anything off or blocking any views.” The composition and orientation were determined less by artistic concerns than by the various needs of the property’s owner, a businessman who often brings home adminidstrative work.

Some of the beams, hollowed out and fitted with sliding doors, serve as cabinets. Protrusions and recesses became either shelves for books or the steps of a staircase so helter-skelter that it’s difficult to identify as such. The stair leads up to a mezzanine outfitted with a pair of black linoleum desktops. Under it are tucked a table and chairs for meetings.

Farris imagines the rejuvenated stable speaking: “Look at this place. This is an office. Enjoy!”