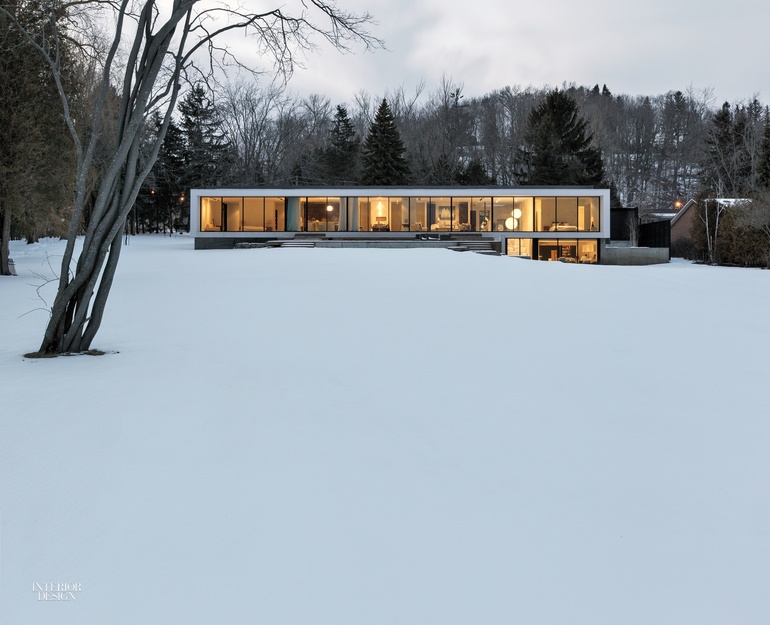 Dark or light, his or hers. These are the dualities that shaped the initial concept for a house on the outskirts of Toronto. Reza Alia­badi imagined the place as a long, narrow, low volume with two bedroom suites and two home offices—a setup tailored for a particular young couple, the namesake of Julia Francisco Design and her geologist husband.

Then two became three. “We got pregnant in the middle of the project, which was a wonderful surprise,” Julia Francisco says. “What’s remarkable is that Reza’s architecture adapted very well.”

It was the clarity and rigor of the plans developed by his office—named RZLBD for the consonants in his name—that allowed the couple to welcome their baby daugh­ter with minimal fuss. The 6,400-square-foot house is divided lengthwise by a corridor, the master suite at one end and a guest suite at the other. In between, hugging the north wall, which is mostly windowless, a pair of bedrooms replaced the requested offices. Public spaces gather along the south side’s glass wall, with its generous 10-foot-tall modules overlooking a deep lawn that stretches to the waters of Lake Ontario.

During the design process, Aliabadi and Francisco talked a lot about Ludwig Mies van der Rohe. “That animated the project,” Aliabadi says. “Keeping it simple on the outside, then making it luxurious on the inside.” A Barcelona daybed, covered in white leather, sets a Miesian tone right at the entry.

Straight ahead, the floor cascades downward as a combination of conventional stairs and a glam expanse of shag-carpeted stepped seating. The window wall beyond the steps frames a lake view. At the bottom of the steps, a partial basement contains a playroom and a workshop.

Back on the main level, the sequence of public spaces is punctuated by dividers that line up with the window mullions. “It’s open-concept but not entirely,” Francisco says. A two-sided fireplace rises between the living and dining areas, the latter separated by a partial wall from the kitchen. And the kitchen is definitely the showpiece, with an L-shape Carrara marble counter defining a generous space for guests to linger—and the house’s youngest occupant to play.