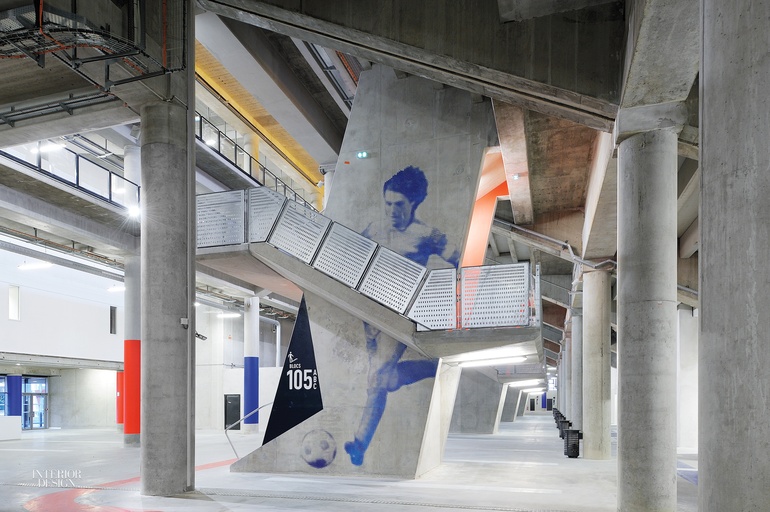 Reaching the 2010 semifinals of the Champions League, European club soccer’s most prestigious tournament, Olympique Lyonnais traveled to Germany to face the mighty Bayern Munich. Playing at the stunning Allianz Arena, designed by Herzog & de Meuron, only served to reinforce the urgency of building a new stadium back home. “I realized we’d moved into a completely different league,” Olympique Lyonnais president Jean-Michel Aulas recounts. “The stadium we had no longer offered the functionalities or capacity required.”

Olympique Lyonnais was founded in 1950 but really rose to prominence as a result of winning seven consecutive French league titles starting in 2002. The architecture firm that scored the project for the stadium in Décines-Charpieu, a suburb of Lyon, had a similarly impressive track record: Populous had previously worked on the O2 Arena and Wembley Stadium in London, Yankee Stadium and Citi Field in New York, and the Toyota Center in Houston. And the Parc Olympique Lyonnais stadium, at 650,000 square feet, is certainly ambitious. It accommodates almost 60,000 spectators while offering 105 VIP suites, seven corporate lounges, seven restaurants, the largest of which measures nearly 13,000 square feet, and an extensive souvenir shop with a satellite kiosk. Also outside are 16,000 parking spaces and a dedicated streetcar station. In time, the stadium will stand at the heart of a complex including two hotels, an office building, and a recreational facility.

Populous principal Garry Reeves was intent that the Grand Stade, as it’s often called, be about more than soccer. “Why build a stadium that gets used every two weeks, when it can be a catalyst for things to happen 365 days a year?” he reasoned. Hired to take the lead on interiors, Naço Architecture principal Marcelo Joulia intuited something very similar—his firm’s name means intuition in the Paraguayan Guarani language. “You no longer just go to see the match. It’s a much broader experience than that,” Joulia says.

Reeves topped the glassy stadium with a tensile canopy shaped to undulate like nearby forested hills and supported by columns that bear more than a passing resemblance to tree branches. At certain points, the canopy extends as much as 130 feet to shelter smaller structures as well as open areas for pop-up events. Inside, he made a deliberate space-planning choice in deference to the tradition of Olympique Lyonnais fans singing together. “When everyone can see one another,” he says, “the atmosphere is much, much stronger.” He therefore decided to position no hospitality venues at the ends, behind each goal, so as not to interrupt the solid walls of supporters in the grandstands. The hospitality venues themselves likewise offer constant views of the field.

Joulia’s main concern, meanwhile, was to endow the interiors with a strong identity. “What people love in sport is the passion and the un­expected,” he asserts, adding that the oversize portraits of several of the club’s most famous players, which appear on walls and windows, are “like angels that look over you.” Pennants emblazoned with the Olympique Lyonnais crest are omnipresent, as are its four colors: blue, gold, red, and white. Each is used in different doses according to the category of a space. Gold, for example, dominates in the VIP zones.

There are furthermore winks to history. A VIP lounge, Club 1950, boasts vintage-style furnishings harking back to the year Olympique Lyonnais was founded. The largest of the restaurants, the Salon des Lumières, is named in reference to Lyon’s nickname, the Ville des Lumières, and outfitted with a series of stands inspired by the city’s main food market. Another important consideration for Joulia was to make spaces flexible enough to cater to all kinds of events. In addition to being used by sponsors during matches, the VIP suites can host business lunches, thanks to the folding tables and chairs stashed in storage units built into the walls.

The vertiginously lofty concourses are filled with an intoxicating buzz as they fill with fans on game days. On a sporting level, player performance seems to have been galvanized by the Grand Stade. After it was inaugurated, Olympique Lyonnais remained unbeaten at home for the rest of the season and ended up second in League 1, qualifying once more for the Cham­pions League. In the preliminary group stage, the club even managed to avoid its old rival, Bayern Munich.