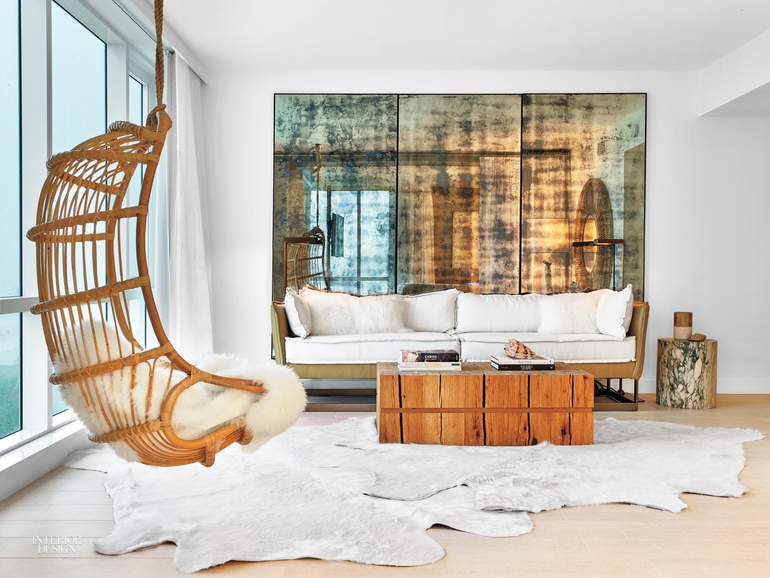 Imagine for a moment that the design of an ultra-deluxe hotel didn’t shout, “Look at me!” Imagine that it said, quietly, “Look at you.”

That’s the ethos reflected by 1 Hotel South Beach, the Miami Beach outpost of an eco-conscious brand developed by Interior Design Hall of Fame member Barry Sternlicht, chairman and CEO of Starwood Capital Group. Will Meyer and Gray Davis, hospitality-savvy types whose Meyer Davis Studio spends about half its time on hotels, handled the Miami Beach project from start to finish, and the cherry on top is the presidential suite. Of the 426 guest accommodations, occupying part of a 1968 building, this is the one you want.

As good as Meyer and Davis are, however, they don’t try to call attention to themselves with me-me-me bold gestures. “You know ‘starchitect contemporary’? This is the antithesis. It celebrates texture, beach tones, and nature,” Meyer says.

The long, rectangular 2,800-square-foot plan of the presidential suite prioritizes its private quarters, particularly the bedroom and adjacent sitting area, which get the direct ocean frontage. “You’re just floating above the beach,” Meyer says. Even as you shower, you have an oblique view of the waves, a touch intended to give this suite appeal for seen-it-all guests. “The people who stay here have places around the world, so we needed to create something that’s a departure from what they are accustomed to,” Davis notes. “We had fun with it.”

You're the One: 1 Hotel's Miami Beach Debut by Meyer Davis Studio

As you move into the public zone, you encounter the media room followed by the living area, both set back a bit to make space for two balconies. Next come a boffo dining-entertaining area and a full open kitchen. “You can really relax and have a good party,” Davis says. “The pool table in the living area definitely helps.” If guests want to stay over, unlock the communicating door to a double-king second bedroom, an additional 750 feet.

Sternlicht insisted that sustainability, though part of his core mandate, had to be understated. “We tried to execute it in a beautiful way that’s not in your face,” Davis explains. White paint makes a serene backdrop for a neutral materials palette based on various types of natural fiber, wood, and stone. You can practically feel the nubbly textures with your eyes. Elements in rope, more prevalent here than on some sloops, range from a sisal rug in the media room to a twiny composition framed on the wall in the living area. The seat on the living area’s bench and the rugs in the private sitting area are fuzzy cowhide. In the bathroom, a striking, gnarly tamarind-root chair and stump table could make a guest feel like a happy tree-house dweller—eco chic meets Ewok chic. Teak, found in other rooms, is sourced mostly from Java, Indonesia, because of its reforestation rules. Every time a tree is cut down, a new one is planted. Adrianna Shamaris, who specializes in organic design, contributed the media room’s teak-root cocktail table.

Low-key works best, of course, when you can occasionally break away. “Everything is neutral, and then suddenly you have a pop of bright green,” Meyer says, referring to a stunning wall of moss. Just try to resist touching it. (The consultant that created the installation is local, meaning it’s green in more ways than one.) The marble of a Kelly Wearstler side table offers a blue accent, while a burst of blue is provided courtesy of one of the biggest, best sources there is. “Because of the floor-to-ceiling windows, the Atlantic Ocean is the main element,” Meyer says.

He and Davis furthermore selected man-made objects that recall the natural world. Illuminating the dining table is a handblown “branching bubble” chandelier by Lindsey Adelman Studio. “Lindsey’s approach is lighting as an organic feature, mimicking the way plants grow. It’s really the perfect choice for this room,” Meyer says—not to mention an inescapable presence in myriad high-end interiors these days, with good reason. And there’s something almost old-fashioned about the private sitting area’s hanging basket seat. It evokes an afternoon in the country, not a night of clubbing in Miami Beach.