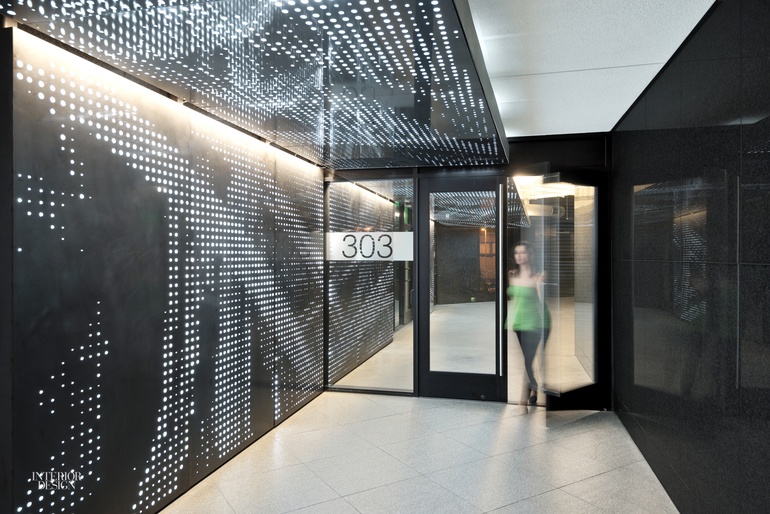 What becomes a lobby most? In our riff on the old Blackglama mink tag line, the spokesmodel is neither Joan Crawford, Faye Dunaway, Liza Minelli, nor Cher but instead Patrick Tighe. And we’re definitely sold.

In this alternate scenario, a previous client of Patrick Tighe Architecture, the Lincoln Property Company, had purchased a pair of office buildings near Los Angeles. Separated by an alley, they were generic 1960’s structures, number 303 being 10 stories and number 333 seven. The real-estate developer was looking to jazz things up, not anything super-trendy yet still enough to signal creativity as a draw to lessees that would be good neighbors with the anchor tenant, Cartoon Network.

Accustomed to ground-up projects and extensive renovations, Tighe embraced the opportunity to focus on interiors. His task? Use the buildings’ current lobbies, plus a new mezzanine lounge, to develop a shared language. His goal was to provide what had once been disjointed buildings with a strong common presence—dare we say a brand? That led to naming the development Connexion Burbank.

Sounds straightforward enough. As he explains, however, “We were dealing with three different existing conditions.” In just 4,100 square feet. Black granite dominated one lobby, while its counterpart’s distinguishing feature was a long sidewall of beige travertine. As for the planned lounge, its “before” state, he notes, was little more than a corridor next to an office.

For Tighe, “first things first” meant engaging in architectural archaeology to uncover the buildings’ hidden past. Down came the dropped ceilings to expose 12-foot and 14-foot heights capped by steel decking. Up came the carpet to reveal concrete flooring. On the mezzanine, he ripped out the wall between the corridor and office to yield a single lounge-worthy space.

Everything was already beginning to give off the coveted industrial-creative vibe. Now it became a question of how to keep that aesthetic at the forefront despite the fact that, for budget reasons, much of the lobbies’ granite and travertine had to remain in the background. So he devised a plan based on layering. The palette of new materials would be very restricted, just clear-sealed steel, clear-finished plywood, and white LEDs. But leave it to Tighe to combine them into a stunning composition, notable for its structure and animation.

The showstopper is his insertion of steel panels. He cites the grand total as more than 100, and each is incised with round holes to let the LEDs shine through in designated patterns. “We made a crisscrossing freeway pattern for one lobby and a vertical suggestion of raindrops for the other,” he says. In both lobbies, the panels front sections of walls and occasionally wrap outward to form canopies. These deco­rative canopies furthermore extend beyond the front doors to function as exterior canopies, street-side. They’re certainly hard to miss when driving by on the boulevard.

The “steel rain,” as he calls it, and the “freeway” next door owe their brightness not only to the LEDs behind but also to other components of the lighting program. He suspended slim LED linear fixtures in all three spaces. In the granite lobby, he washed the ceiling with up-lights and the paneling with downlights. In other words, he treated light like paint on a canvas.

Douglas Elliman Makes a Grand Entrance Onto the L.A. Scene with its Patrick Tighe–Designed Office

Picking up on the color of the travertine was among his reasons for making plywood another primary element. In that lobby, a series of plywood oblongs, also perforated, hang overhead. He then brought the same treatment up to the lounge, in the other building, to help create a sense of place from nothingness.

Yes, the lounge was meant to serve circulation purposes, as a secondary route inbound from parking as well as the route outbound to a newly landscaped roof terrace and the waiting area for the adjacent multi­purpose room. But how to transform an in-between space into a true hangout, a tenant perk? That was easy. Make it like a bar, of course. He built a generous one. Drinks destination, lunch spot, or casual work area—all are possible.

He returned to plywood for the base of the bar and built his own plywood bar stools for perching. Because Connexion branding was key to the program, he preferred to avoid a recognizable brand when it came to furniture, even though there would not be very much of it. The custom stools and benches are therefore plywood boxes that duplicate, of all things, the dimensions of apparatus for CrossFit training. The Lincoln Property Company’s vice presidents had mentioned an interest in possibly incorporating exercise programs—either in the lounge or on the terrace—and this simple seating could then be put to use. For the record, Tighe participates in CrossFit’s vigorous regimen himself.