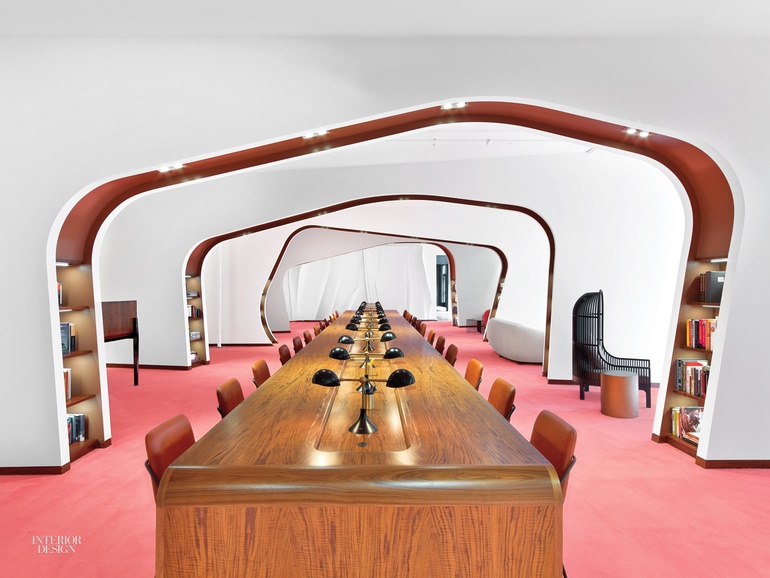 Workplace projects, as conceived by Rapt Studio, typically have story lines. While the San Francisco headquarters of the digital file-sharing service Dropbox is immense, the plot is tight. “It’s based on a diagram of a radially expanding village with a strong core and smaller nodes,” Rapt account exec­utive and creative director Louis Schump begins. In terms of function, they are key gathering places shared by the Dropbox population.

They furthermore connect to Dropbox culture, bringing in various subplots. Here’s Schump’s take: “We developed a sensory score card for each space.” One might be highly visual, another auditory, another devoted to taste.

Interspersing the nodes throughout, equidistant from the core, and shifting from swaths of workstations to “neighborhoods”—their ad­jacencies planned for circu­lation horizontally and vertically, via five staircases—were strategies intended to make Dropbox stand out from the crowd of tech workplaces nearby. Both firm and client pushed and pulled to devise solutions. The process was as important as the result.

It was also Rapt’s job, a tough task, to establish seamless connections to bring order to 260,000 square feet in what had originally been a pair of separate ground-up buildings, one five stories and the other six. Prior to Rapt entering the picture, Dropbox had gotten involved during the construction stage. The real-estate developers then agreed to cut openings to join each level.

Entry is now via the wider of the connected structures. Reading positively gallery-esque, the double-height reception area’s mirrored wall captures the reflection of serpentine benches in steam-bent oak strips, sitting on the polished concrete floor, and a constellation of moss-wrapped spheres hovering overhead. The slimmer structure, meanwhile, houses what are arguably the most striking of the nodes, starting with the library on two. A library for an all-digital concern? Picture a welcoming, collegial environment—remember, university libraries were as much about meet-ups as studying.

Rapt configured the library as a swoopy cocoon, not a sharp angle in sight. Set into the ribbonlike archways, walnut-veneered shelving contains, incredibly, books, while a super-long table in the same wood runs down the center of the room. Project designer Rosela Barraza chose pink, unabashedly pretty and entirely unexpected, for the plush carpet and a petite rounded love seat. The rosy color is “a play on old European opera houses,” Barraza explains.

Music of a very different kind is important to Dropbox culture as well. In the early years, staffers would blow off steam at a karaoke bar. Now, right at work, they have the acoustically enhanced “jam room,” where Rapt went quasi-grunge. Schump says with a laugh, “It’s somewhere between a garage-band studio and your family attic.” They can play instruments or check out memorabilia, including vinyl and cassettes, from the comfort of a groovy French 1970’s leather-covered sofa.

Other hangout spots are more business-minded. In an open lounge outside training rooms, a low-slung red velvet-upholstered sofa by Francesco Binfaré faces Eileen Gray’s iconic Bibendum chairs. A much larger, enclosed lounge mixes buttoned-down and laid-back, featuring seating by Jean Royère and Patricia Urquiola alongside a raised nook outfitted with oversize pillows and sheltered by a curved oak-veneered canopy.

Dedicated to decompression, the latter lounge is a part of the windowless “deep focus” suite. This is the domain of the rapid-response team, which handles software glitches or hacking attempts. Coding marathons take place here, too. “No one talks,” designer August Peter­sen notes. “You’re inside the machine.”

Scattered amid the workstation “neighborhoods” are plenty of conference and meeting rooms, their doors detailed with tall aluminum pulls instead of conventional handles or knobs. (You won’t see many other doors, by the way. There’s not one private office for the 1,800 staffers.) Likewise sprinkled about, the break-out areas known as “living rooms” handle impromptu gatherings.

Or get together in the cafés, termed “micro kitchens.” Supplementing the cafeteria and a coffee bar—both of which Rapt brought in res­taurant specialist AvroKO to design—these cafés appear at least once per level, usually twice. They offer communal tables, drink rails, sofas, even a swing.

Navigating between a café and a conference room or the library might take you through the spot nicknamed the “intersection,” a quasi-rotunda with a dome effect achieved with the help of white backlit fabric stretched across a round cutout in the ceiling. The curved walls are covered in bright florals with eagles and dinosaurs peeking through. For an extra touch of levity, the middle of the circular bench at the center of the space has been commandeered by a 3-D plastic dinosaur and his friend, a beached shark.