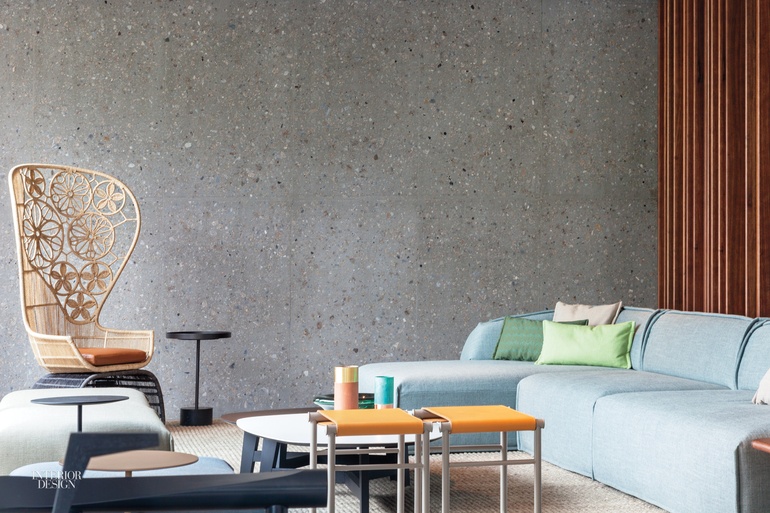 To steal a peek at George Clooney’s 18th-century retreat in northern Italy, board your seaplane or take your yacht for a lap around Lake Como. From the air or the water, Casa Clooney comes into view amid a profusion of storybook villas and palazzi, all set against the snowcapped Alps—no wonder this idyllic place is a magnet for Hollywood actors along with other members of the global elite. Then, after you’ve had your fill of celebrity voyeurism and architectural nostalgia, you can cross the lake to dock at Il Sereno Lago di Como, a modernist-minded boutique hotel by Patricia Urquiola. The Interior Design Hall of Fame member has made her reputation with a bravura use of color and pattern, however this latest hotel showcases her at her most restrained.

It was while traveling in the U.S. that she met the fledgling Sereno Hotels group’s owners, who had already commissioned another Hall of Fame member, Christian Liaigre, to design their first property, Le Sereno on St. Barts. For each location, it was important to the owners to have a single firm oversee both the architecture and the interiors. That dual responsibility gave her the control to integrate inside and out, via certain materials specified for the two places.

At the start of the project, she razed the existing hotel on the site, leaving the old stone dock in place to become the base of a new five-story structure. Its subsequent architectural references derive from in-depth studies—a habit acquired back when Achille Castiglioni was her thesis adviser. She based the grid form of the hotel facade on the region’s singular modernist masterpiece, a perfectly square white government building that Giuseppe Terragni completed in 1936 opposite the cathedral in Como proper. Loggia balconies in a local gray flecked breccia stone create the grid’s horizontal lines. To update the gesture, she added vertical louvers that guests are encouraged to readjust throughout the day. “You take a photo of the facade in the morning, and you’ll see changes by the afternoon,” she says. “I encourage natural variations that are connected with a place, with the light.”

A blank swath of wall on the facade of Terragni’s building proved handy for mounting oversize political banners. At Il Sereno, Urquiola asked punk botanist Patrick Blanc to unfurl one of his signature vertical gardens on a similar bare patch. Blanc also greened a lot-line wall seen through the low windows of the entry corridor. At the point where the corridor reaches the reception area, the garden element disengages from the wall to plummet, like a plant-covered eagle’s talon dramatically outstretched, into a courtyard right outside. “Land-art sculpture” is her term for this intervention.

Breccia stone reappears in reception and the lobby lounge. They furthermore incorporate groups of Urquiola’s distinctive furniture, including her long-standing best sellers for Cassina, where she has served as art director since last year. The color palette for fabrics is “locally sourced,” if you will. Sky blue for the generous sofas is complemented, for their throw pillows, by a leafy green and a moody blue-green recalling the lake.

Guests who arrive for dinner in the restaurant, helmed by a Michelin-starred chef from Milan, descend a walnut staircase that seems to float inside a cage of slim coppery tubes. At the restaurant’s threshold, flooring switches to terrazzo, which Urquiola tattooed with a decorative fan pattern taken from the hair combs historically sported by the ladies of Lombardy. She notes that terrazzo is an element typical of Palladian architecture around Lake Como.

“The lake—it’s always present,” she says. In the guest rooms, just 30 of them, headboard walls are upholstered in a jacquard that presents water imagery, digitally abstracted by her studio, while other walls are paneled in nautically inspired smooth walnut planks. The same wood clads ceilings in the bathrooms, each with a large window facing the lake. About half of them boast a double sink vanity in an unusual, unusually decadent brown travertine.

Across from the sinks, the freestanding, lozenge-shape tub is a design that she developed specifically for Il Sereno but has now put into production to sell globally. She reverted to existing production pieces, barrel chairs and a cocktail table in tubular aluminum interlaced with thick rope, for the penthouse suite’s spectacular wraparound terrace. Like the loggias below, it’s fronted by blackened-steel balustrades strung with netting to evoke Lake Como’s fishermen. Catch George Clooney if you can.