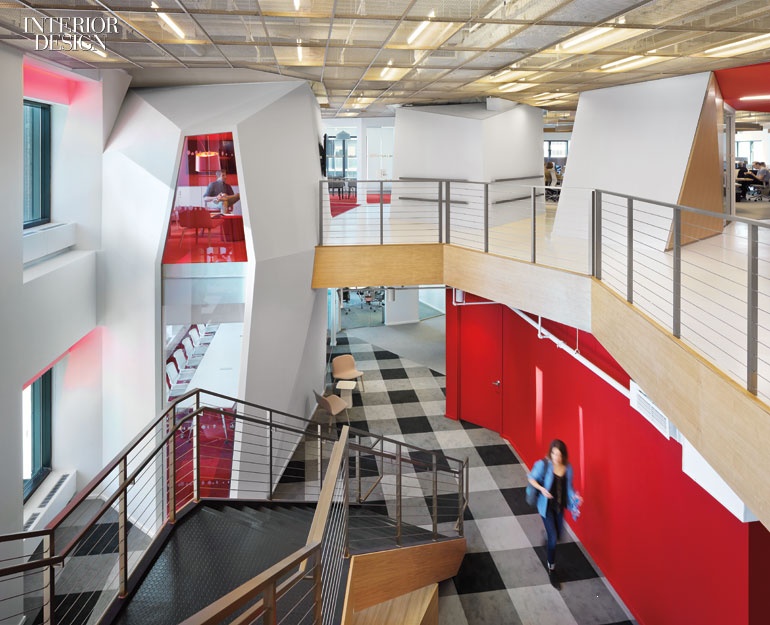 Executives hoping to grab the fabled corner office—or any office at all—need not apply at the North American headquarters of the global advertising agency Publicis. Located on the edge of Times Square, in a cookie-cutter commercial tower, the mammoth office combines three existing levels with five new ones by Interior Design Hall of Fame member Clive Wilkinson in order to consol­idate employees from other Man­hattan locations. The result totals 190,000 square feet. And not one of the 1,200 employees, top brass included, can close a proprietary door.

The desire for an “open concept” environment originated with CEO Andrew Bruce. “We’re a communications agency, and we need to break down the walls that prevent com­municating,” Bruce explains. “When people have an office, they’re at their desk all day, blasting out e-mails.” Spatial equality, he believes, sends a message: “Don’t respect authority—respect intelligence. Ideas matter.”

Publicis turned to Clive Wilkinson Architects to accomplish the transformation, because the firm’s portfolio already boasted over a dozen ad agencies, along with three offices designed according to Activity Based Working, developed and championed by the workplace consultant Veldhoen + Company. A major part of the appeal of this non-hierarchical arrangement, letting employees choose where to work, is efficiency. “Clive pointed out that, at any agency, roughly 30 percent of your employees are always off-site. So we can easily have 1.2 people for every seat,” Bruce says. “We’re investing in human capital, not inanimate objects.”

Once Wilkinson had buy-in, he confronted a standard Midtown office configuration, with a rectilinear core for elevators and mechanical systems. Treating it like “the trunk of a tree rising through the building,” he explains, he then masked the box­iness by nesting various asymmetrically angled volumes around the sides. He then subverted convention again by dematerializing the plan as it moves outward. With no perimeter offices—“which give you that very boring wraparound between the elevators and the curtain wall,” he continues—the windows remain unobstructed. Nearly all frame stunning views.

This horizontal fluidity is echoed diagonally by the grand stair angling across a broad atrium to connect three middle levels. (Secondary stairs connect the levels above and below.) Thus the communication emphasis—the ability to see, be seen, and reach out—flows back and forth, up and down.

Although a recent renovation of the existing levels compelled him to leave them virtually as they were, the new ones bear witness to a strong design intention in support of Activity Based Working. Irregularly shaped communal desktops, built-ins often sheltered by integral canopies, dominate an office-scape that might seem disorienting to a first-timer. Order emerges gradually. “Since no one owns a desk, each floor has two ‘anchor points’ with personal lockers, closets for office supplies, things like that,” he explains.

Near these anchor points, against the core, are pantries, stocked with snacks and drinks, along with phone rooms. Wilkinson also placed semi-enclosed phone booths, padded for acoustical privacy, amid the communal desktops. “We were very careful about sound absorption,” he says. Individual workstations, resembling study carrels, and small lounges are scattered along the curtain wall. The few enclosed spaces at the perimeter, generally at the corners, are meeting and conference rooms of varying sizes and shapes.

He encouraged Publicis to disperse “destinations” throughout the agency. “We created gathering places to drive movement,” he says. Bruce agrees: “I call it planned inefficiency. Making the employees cover ground exposes them to the broader agency, the potential of our different capabilities.” So the lowest level is home to a coffee bar, along with a pub serving wine and beer, and the in-house IT bar, Lion Tech. Two levels up is a multi­use space—for Publicis University classes, major presentations, and other events—with its signature checkerboard carpet clearly visible, thanks to the atrium, from the level directly above.

That’s the main entry level, and it’s perhaps the most dense. Visitors immediately encounter not only the expected reception desk but also, straight ahead, another coffee bar. To the side, an expansive raised lounge welcomes clients waiting to enter their own dedicated conference room. At the desktops everywhere else, a hive of work activity is palpable.

To balance the dispersal of amenities, Wilkinson clustered parts of the agency into “neighborhoods.” Large zones might be dedicated to specific clients; given to related disciplines, including art direction and copywriting; or assigned to departments with particular needs, such as production and accounting. The clustering keeps employees within reach of whom and what they need without balkanizing them.

“Most of all, the space allows us to adapt,” Bruce observes. “I don’t know how we’ll be shaped in five years, but I do know we’ve built an office that will accommodate it.” In the meantime, Wilkinson’s experiment promotes the kind of spontaneity that sparks creativity. But the concept does require discipline. Rather than disappearing into smartphones, everyone has to be focused, flexible, and courteous. If it’s not your desk, don’t leave your stuff on it.