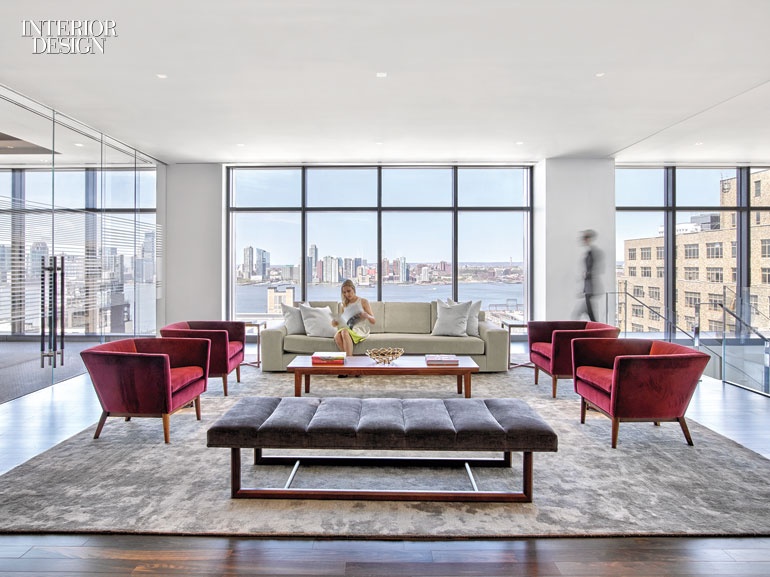 Relocating from the Motor City’s suburbs to the Big Apple’s Hudson Square neighborhood gave Cadillac the perfect opportunity for reinvention. The global headquarters now occupies a duplex penthouse newly constructed on the roof of a century-old warehouse. And Gensler design director and principal Stefanie Shunk made sure that the 35,000-square-foot space would reflect the branding revolution at Cadillac House, down at street level.

Arriving at the office feels like getting into a luxury sedan, thanks to an elevator lobby wrapped in dark brown leather as fragrant as car upholstery fresh off the lot. As at Cadillac House, the reception desk is tucked away in an alcove to the side. What visitors see first is maquettes of cars, testing various finish colors, backdropped by a Hudson River panorama. “We kept the landscape of the furniture low to really embrace the views,” Shunk says. Mirrored vitrines display hood ornaments and other trophies, while everything is reflected by a ceiling she calls “as shiny as the exterior of car.”

Actual white automotive paint coats the cantilevered staircase between the two levels. Pops of the red, yellow, and blue found in the Cadillac logo’s shield rev up the otherwise neutral palette. Meeting rooms, with black carbon-fiber tabletops that she styled after CT6 hoods, are named for concept cars. They range from such heritage favorites as the LaSalle and Fleetwood to the 2013 Elmiraj—proof that Cadillac continues to pick up speed.