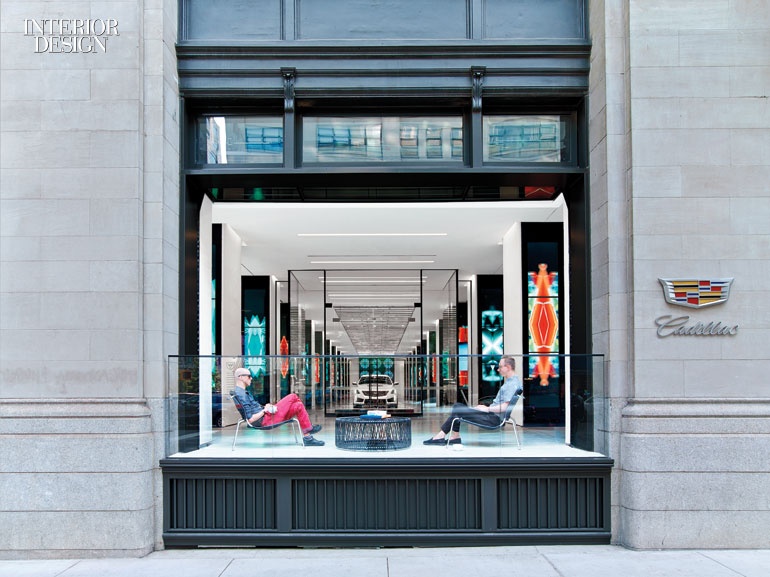 Elvis toured in one. Everyone from Dizzy Gillespie and Johnny Cash to Lady Gaga and Outkast has written a song about them—Bruce Springsteen wrote two. Dystopian bad guys in The Matrix Reloaded used one to chase down Trinity, who used another to evade them. The Cadillac is an American icon. In 1902, it rolled off the assembly line, right into pop culture, and has stayed there ever since. Even legends need to look forward, however, which brings us to Cadillac House. At this branded experience environment, 12,000 square feet at the base of a converted warehouse in the Hudson Square neighborhood, displays of cars classic and new merge with social space as well as strategic partnerships with other high-octane brands: the Council of Fashion Designers of America, Visionaire, and Joe coffee.

“Cadillac was the first American car designed by an actual designer, not an engineer,” Gensler creative director and principal John Bricker explains. He took the wheel of the project a few years ago, when Cadillac was shifting gears under new leadership and relocating from the General Motors technical center, designed by Eero Saarinen & Associates near Detroit. “They needed to embrace their heritage but focus on the creative class, that kind of downtown urban sensibility,” Bricker adds.

First move? Removing the glazing from two enormous windows framed by the building’s limestone pilasters, then adding balustrades, to turn the front of the space into a sort of veranda or—given the occasional vintage models parked here, alongside the outdoor furniture—a smart wink to a car dealership’s lot. Separating this open-air zone from the interior, proper, is a glass wall. Think of it as a windshield. Clearly visible through the glass, extending rearward through the center of the space, cars line up on a long strip of terrazzo set into the polished concrete floor. The structural columns that form rows to either side now support tall video screens. “We worked out digital templates that can do everything from cinematic arrays, which  go across all the screens at once, to a more kaleidoscopic approach with car details,” Bricker says. “It’s super-easy to use. Just feed the asset sources into the template.”

Fashion shows can also take over the terrazzo “runway.” Where it terminates, hang a left to find the CFDA’s “retail lab,” a corner where a rotating cohort of clothing designers can set up shop to learn the back-end of merchandising and marketing. “The retail lab gives them the ability to customize a designated store space with their own aesthetic,” CFDA senior manager of strategic partnerships Ashley-Brooke Sandall says. Debut occupant Timo Weiland, who brought in mannequins wearing menswear from his spring/summer 2017 collection, says he was “endlessly inspired by the Cadillac House aesthetic, which is uniquely American while also feeling specifically downtown.”

Right across from the retail lab, Visionaire, the ne plus ultra of downtown fashion and art publishers, oversees an events venue and gallery. The 1,500 square feet can open to the outdoors, divide itself with curtains and movable walls, or disappear entirely behind blackout screens. “We are used to curating within our publication,” cofounder Cecilia Dean says. “To be able to bring that creativity to life in a space that is open to the public is truly thrilling.” Visionaire inaugurated the space by commissioning a psychedelic video installation with eye-popping portraits of the female form that seemed to melt. A Richard Avedon exhibition went up for September’s fashion week.

But back up a moment. At the front, don’t miss the walnut veneer, inspired by Cadillac dashboards, that lines the reception alcove. Concierges here, identified by their chic yellow jackets, offer roadside assistance, perhaps directing you to refuel at the marble counter of the coffee bar operated by Joe. Or pause on the tufted sectional in the lounge, which overlooks the retail lab through a 13-foot-high screen that re-creates Cadillac’s precision-pattern radiator grille. You could also refresh in the restrooms and recharge at tables topped in live-edge walnut with built-in power connections. On a wall near the table, check out the photos dug up from the company archives and now hung in rows. Reminded of the Cadillac legacy, motor over to a CT6 sedan, and pop the hood. Various models informed interior details throughout Cadillac House: The leather interiors inspired luxurious, massive door pulls, while those famous grilles reappear, etched in glass, on the doors themselves.

Around the U.S., dealers and customers alike are looking to Cadillac House for direction. “You can’t buy a car here,” Bricker says. “What you can do is see what an American luxury sensibility should be.” Further down the road, geographically and chronologically, is a Cadillac House in Shanghai. That one will be ground-up, featuring a ceremonial platform, floating on water, for VIP car delivery.

Read about the 35,000-square-foot headquarters that Gensler designed to accompany the Cadillac House here.