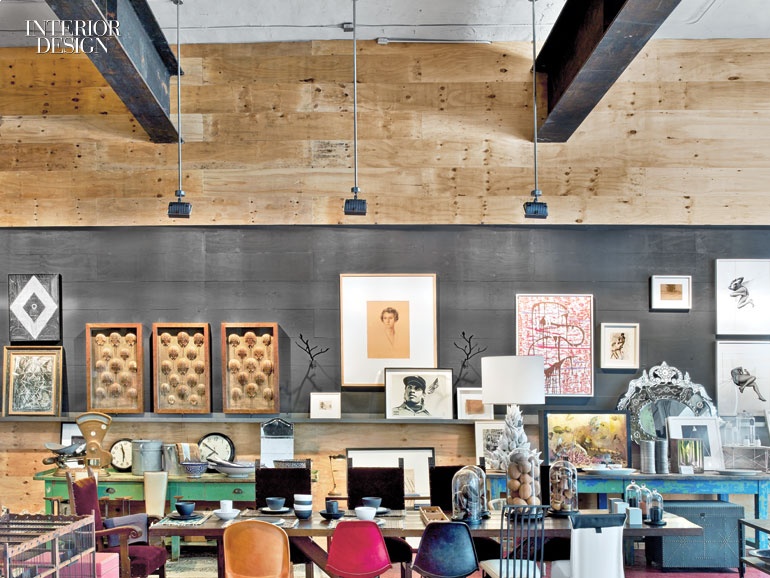 A century ago, factories flourished and warehouses sprawled along Brooklyn’s East River waterfront between the Brooklyn and Manhattan Bridges, fueling a manufacturing boom in New York. These days, the industrial buildings still standing in the neighborhood now known as Dumbo—for Down Under the Manhattan Bridge Overpass—are witnessing a new wave of economic prosperity, with glassy apartments rising all around. So when Mark Zeff decided to relocate his design firm, Markzeff, it made sense to go where the action is. He set his sights on a ground-level location, one large enough to accommodate not only the studio but also a home store, the latest offshoot of his Blackbarn brand. Inspired by his family’s black-painted barn-style East Hampton weekend home, the brand has been buzzing, thanks to the success of the rustic-luxe houses he’s been designing for others, the publication of a book, and the launch of an associated restaurant.

One particular Dumbo warehouse, circa 1920, offered 6,800 square feet entered via a disused loading dock. He couldn’t resist. “It was exactly what I’d come to Brooklyn to be immersed in, a broken building waiting to be revitalized,” he says. “That’s what I love, strange spaces that nobody else wants.” Two months later, he’d transformed it into a headquarters that almost anyone would love to have.

With the roll-down gates gone, replaced by huge windows, the 3,200-square-foot loading dock has become the Blackbarn shop, filled with treasures that Zeff and his wife, Kristen, sourced on trips around the world and she furthermore assisted in configuring on-site. From his native South Africa comes farm furniture. “It’s great craftsmanship to stand the test of time,” he says. Bangles are from Cameroon, rugs and baskets from Morocco, and ceramic lamps from Italy. “The way we buy stuff is basically by asking: Would we put this in our own house?” he explains. “If the answer is yes, we’ll buy it. If it’s no, we move on.”

As for the Blackbarn space itself, the concrete floor is now painted red. “We just polyurethaned it originally, but it was too dark,” Zeff explains. “I’d been researching the industrial reds of the 1930’s and 1940’s, so I just went for it.” The red stops at the base of a short flight of stairs, which retain their original yellow paint. At the top, the shop proper turns into more of a showroom comprising a gleaming prototype kitchen and dining area. “It was a conscious decision to have clients and visitors, whether they’re here for hotel or residential work, walk through an environment that inspires them,” he says, adding, “There’s no reason why things sitting out in the shop can’t be pulled into projects, too.” Should a customer admire a table but prefer it, say, 10 feet longer or see a chair but need it not in blue but in white, he or she can sit down with a member of the design staff and confer about having that piece made to the desired specifications.

Beyond the showrooms, the red from the shop floor re­appears as floor stripes and on plumb­ing pipe overhead. The first space in this rear zone is a wide, long vestibule where, near a discreet sign for the Markzeff studio, a massive original pine door hangs like a flag from a ceiling track. “I must have walked past that door 20 times during construction, before anyone noticed it,” Zeff says. Perhaps he was distracted by the pile of rubble that occupied the place that became today’s conference room, with its shell chairs by Charles and Ray Eames. Or maybe the distraction was the sand pit, since removed to pour the floor of the library, brimming with samples and swatches beneath the ceiling’s white-painted corrugated iron. “We covered up the grunginess in certain areas,” Zeff continues. “In other areas, we intentionally exposed it.” Examples include the columns’ inimitable patinas and the countless nails as thick as fingers, bent back by a century of hammers.

Most transformed is the studio at the very back. Here, a rickety mezzanine was ripped out to reveal the glory of a 50-foot cathedral ceiling capped by a skylight. Fans spanning a full 8 feet in diameter keep the workstations breezy. He had initially planned to paint the walls black, in keeping with the Blackbarn theme, but the natural plywood appealed to him. “We painted it half-black, just for the fun of it,” he says. The result is a mix of rough and refined that epitomizes his style and suits the old-meets-new ethos of his adopted neighborhood.