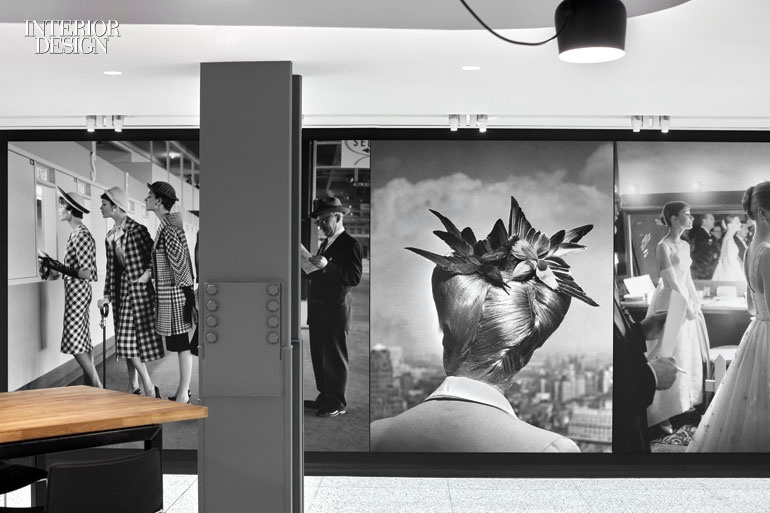 When Time Inc. announced that it would be leaving the storied Time & Life Building, the decision was about more than just finances and appeasing shareholders. The business founded by Henry Luce and Briton Hadden in 1922 had evolved from a group of tra­ditional print magazines into an increasingly integrated portfolio of digitally focused, multi-platform brands. As a result, the Mad Men–era Midtown office tower by Harrison, Abramovitz & Harris—where bar carts had famously rolled down the hallways—no longer suited Time Inc.’s needs.

Meanwhile, its bumpy transition into the new media landscape, accompanied by a spin-off from Time Warner, left the company looking to make some bold, image-changing moves. So Time, People, Entertainment Weekly, InStyle, Real Simple, Sports Illustrated, and more than a dozen other brands relocated to the financial district. The new headquarters by Interior Design Hall of Fame member Todd DeGarmo, CEO of Studios Architecture, occupies six levels of a building completed in 1988 by Cesar Pelli & Associates as part of a complex now called Brookfield Place.

As reinvented by DeGarmo, the interior is almost entirely open-plan. Private offices account for only 6 percent of the desks, a huge change from the Time & Life Building, where the number was more than 10 times that. There are also shared video and photo studios, an array of versatile meeting spaces, and an auditorium that hosts star-studded premieres.

Everything has been conceived with an eye toward interaction, efficiency, and flexibility. And lest there be any doubt that Time Inc. is more than a magazine company, the first stop for many visitors is a reception area where, just beyond the glass doors to the video studios’ control room, an array of screens is clearly visible. The message is immediate and unmistakable.

But it took some persuading for Studios, which consulted on Time Inc.’s real-estate search, to convince executives that this location was the right fit, given its existing condition. “We had to help them imagine that it could be something spectacular,” DeGarmo says. That meant looking beyond the idiosyncratically configured, sprawling floor plates, the 8-foot ceilings, and the small windows.

Ultimately, those expansive floor plates helped to clinch the deal, as they offered the opportunity to bring multiple brands together while reducing the overall footprint to 700,000 square feet, down from 1.4 million at the Time & Life Building. The horizontal adjacencies would support the major restructuring the company has announced to further integrate editorial and business operations. “This is key to the reinvention of Time Inc.,” DeGarmo says. “From a design perspective, it was about reflecting how the brands are no longer stand-alone silos.”

The challenge, associate principal Joshua Rider adds, was “to make sure the spaces didn’t feel too confusing to navigate.” One solution was to carve out a top-to-bottom vertical circulation route, with open staircases flanked by lounges and self-serve coffee bars. Dubbed the Boulevard, this central artery promotes movement while encouraging informal meetings and “casual collisions,” as Rider puts it.

Animating walls along the Boulevard and serving as reminders of a rich corporate history, blowups from the Life Picture Collection include Audrey Hepburn backstage at the 1956 Academy Awards and models placing bets at the old Roosevelt Raceway horse track in Westbury, New York, in 1958. Furnishings mix vintage pieces, such as chairs and stools designed specifically for Time Inc. by Charles and Ray Eames, with current models of those designs and contemporary additions. “A lot of the new furniture we brought in is big, because these spaces are so bombastic,” DeGarmo explains. “Plus, upholstery was a way to introduce color.”

For the office areas, the aesthetic is subtly modulated by a palette of blue, red, and purple, with the dominant color varying by location. Time Inc. senior vice president for real estate Donna Clark explains that the priority was to “avoid a trading-floor look.” Above the rows of workstations, where employees can plug in their laptops, TVs flicker silently, creating a newsroom atmosphere.

People, InStyle, Essence, and the other brands now share a fashion storage area, and nearly all studio photog­raphy is shot in the same location. The video studios have allowed Time Inc. to ramp up production of Web series such as Fortune Live and SI Now. Food & Wine has a camera-ready test kitchen and a dedicated wine vault with a 3,500-bottle capacity and an area for tastings.

In the evening, the cafeteria can double as an events space hosting up to 400 people. Employees and guests take advantage of its terrace, complete with lush grasses and Hudson River views. That’s a long way from the Hemisphere Club, the members-only restaurant once perched at the top of the Time & Life Building, but this new power-lunch spot has its own undeniable appeal.