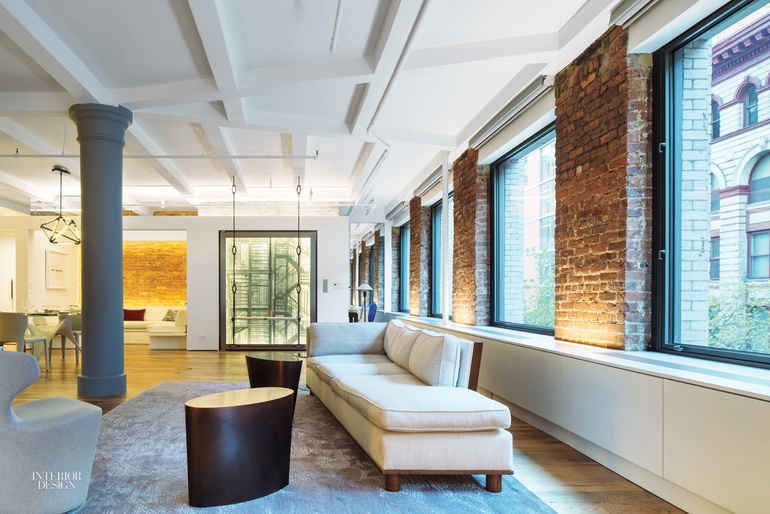 “Gay neighborhood” has proved something of a moving target in Manhattan. That distinction was held by Chelsea back when its real estate was reasonably priced, at least by local standards. Then super-luxury residential and retail arrived. Right before Barneys New York’s original flagship reopened there, with fanfare, Alexander Gorlin Architects collaborated on a nearby apartment renovation that deftly bridges the demographic shift. The former artist’s loft now belongs to a banker turned designer, Larsen Design’s Jeffery Larsen, and his husband, psychotherapist Joe Bolduc.

An Instagram-worthy swing with bronze chains and a leather seat—a sexy magnet during cocktail parties—is now installed in the living area, overlooking the street. To create a feeling of greater height, Gorlin extended the brick piers separating the five windows by harvesting bricks from elsewhere and using them to cover the structural steel lintels above. It’s a slight deception that’s ultimately sympathetic to the 1906 industrial building. “A loft,” Larsen reasons, “is an old wood floor, exposed pipes, and columns that you sometimes wish weren’t there.”

From the living area, the rest of the floor plan extends straight back, so the dining area and the open kitchen serve as a sort of  thoroughfare to the master bedroom. “The vector culminates there,” Gorlin notes. Which helps to explain the mirrored pivot door. When it’s open, the mirror can reflect the occupant of an enormous glass-fronted, marble-lined shower. . .for anyone in the public space to see. The WC, however, is enclosed. This is the new Chelsea, after all.