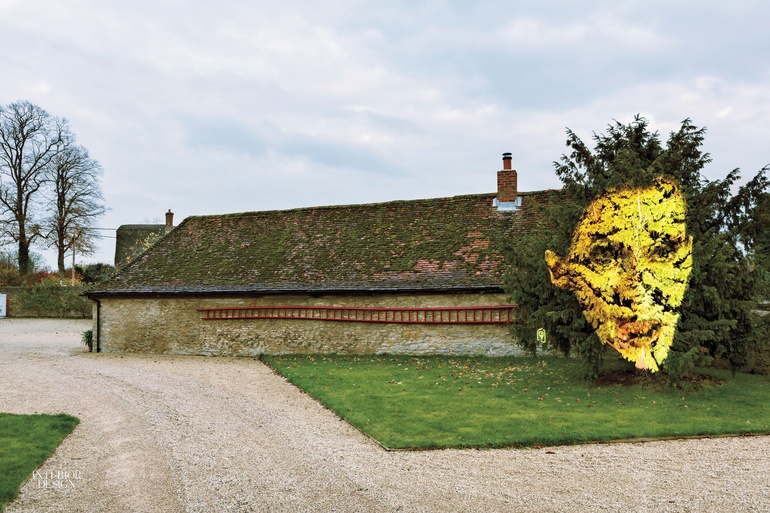 The humble barn is the ultimate hybrid architecture, interweaving the industrial, the domestic, and the agricultural. Their solid, workmanlike forms—expressed in the language of local materials and stylistic quirks—and ability to accommodate a wide range of needs renders them peculiarly adaptable to new uses. Indeed: These days, many of Britain’s finest such examples now serve as second homes or rural retreats.

Albion Barn exploits that astonishing architectural flexibility. The low-slung structure is the centerpiece of Old Belchers Farm, located in the village of Little Milton, about 7 miles southeast of Oxford. It belongs to Michael Hue-Williams, the renowned international dealer and former London gallerist representing the likes of Joana Vasconcelos, Vito Acconci, and Cai Guo-Qiang. (He is also something of an architecture patron, his previous spaces having been designed by John Pawson and Foster + Partners.) Over the course of five years, Hue-Williams has transformed the compound’s stone farmhouse and cluster of barns and stables into a kind of art campus.

The renovation of the barn structure that houses the main gallery was overseen by London’s Studio Seilern Architects. “We were commissioned in January and had to complete the project by October, to coincide with the Frieze art fair,” says the firm’s Swiss-born principal, Christina Seilern. “In nine months, we simultaneously had to design the project, secure planning, put it out to tender, and build. The details went from sketch pad straight to the factory for fabrication.” The old agricultural buildings have lent themselves well to conversion—work, culture, and leisure now melding into one—but Seilern’s care and skill is what makes the place such a joy to visit.

Every corner of the 4-acre property is adorned by exquisite artworks—a marble bench by Barber Osgerby, a stainless-steel “rock” by Zhan Wang—many commissioned or acquired over the course of Hue-Williams’s career. The site also plays host to a rotating lineup of exhibitions open by appointment only; the gallery is currently prepping for “Living With Art,” a show of functional objects by artists like Daniel Buren and Erwin Wurm that opens October 2. Other installations are temporary, such as the James Turrell skyspace erected for a 2014 show, or were conceived to coincide with an exhibit, such as a tennis pavilion built by Richard Woods.

The 3,230-square-foot barn that once housed animals and machinery now accommodates a dining room (for entertaining), a small catering kitchen, two offices, attendant library and storage spaces, and the galleries. The centuries-old exterior is coarse and dark: restored original timbers pair with new feather-edged wood siding that’s been stained to look almost charred. Inside is the opposite. Blond oak floors, white walls, and top-lit spaces speak the global language of the art gallery. In deference to the works, the interior envelope is pared down—far more neutral than the characterful setting implies at first glance. The contrast between the rough building shells and the smooth, reflective white of the interiors suggests a shift not only in atmosphere but in time itself.

These are not the spaces of abandoned industry or the modernist white cube. Rather, they are domestically scaled rooms analogous to potential buyers’ own abodes, allowing them to envision how the art might look in an everyday setting. Take the dining room, for example, a spare, airy space furnished with a Marc Newson table and an explosive Campana Brothers chandelier. The darkness of the exterior is subtly woven in, in the shadowed recess of the deep fireplace and in the stunning frieze mounted high on the wall, Hiroshi Sugimoto’s The Last Supper. The black-and-white chiaroscuro of the photo, with its long cloth-clad table, creates a kind of mirror to the actual dining table, a nod to the sacral importance of the meal.

This is a social space—and a business space, too. Hue-Williams’s success is based not just on knowledge and taste but also on his flair for hospitality. Clients, journalists, and artists come to mingle at long, leisurely meals, soaking in the art and the atmosphere, imbibing the work along with their wine. The rural location enforces a more intimate engagement with the works on display. Once you’ve come all this way, you linger longer—an intriguing counterpoint to the London galleries, which may only represent a brief stop on a crowded itinerary, and thus a less memorable encounter with the art.

The true heart of this art-farm is, however, hidden: a secret library. A discreet panel in the dining room slides open to reveal a cubic volume lined with books on all sides. Another section of the shelving pivots to reveal a stair to the mezzanine level, its floor and railings formed by L-shaped steel slats. The striated steel cage, with its narrow vertical elements, almost disappears against the spines of the shelved tomes. The ceiling, pierced by an oculus skylight, is sheathed in polished steel, reflecting the shelves to invite the illusion of a tower in which books are the bricks and words are the structure. “The owner’s extensive book collection became the focal point of the project,” says Seilern. “The idea was that, once inside the library, one should feel fully surrounded by books, rather than by walls.” There is a sense of seclusion in this intimate space, of being insulated by the art volumes and the inescapable, irresistible country-house fantasy of a secret room behind a wall of books.