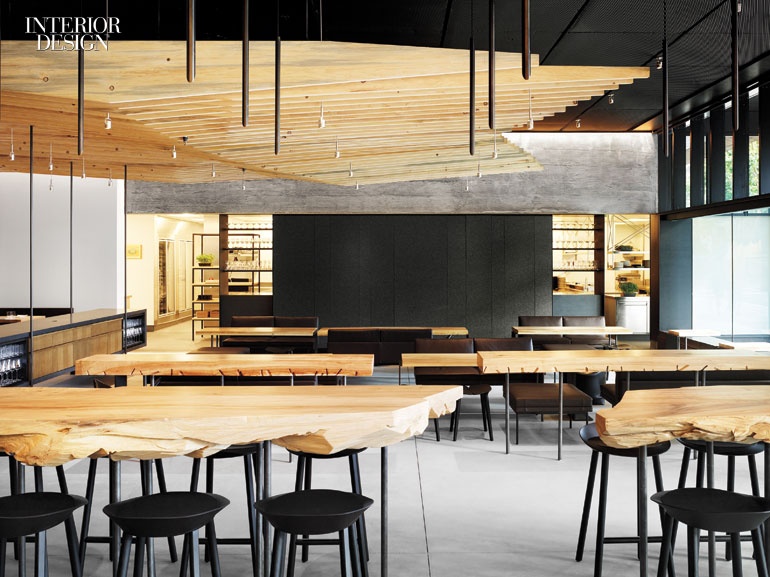 First came Benu, the San Francisco restaurant with the tasting menu that’s earned heaping portions of acclaim, including three stars from the Michelin Guide, for chef-owner Corey Lee. Monsieur Benjamin, Lee’s take on the French bistro, followed nearby. Now his eagerly anticipated In Situ has opened in tandem with Snøhetta’s renovation and expansion of the San Francisco Museum of Modern Art. All three restaurants are the work of Aidlin Darling Design.

Before we get into a meaty discussion of Joshua Aidlin, David Darling, and associate Adam Rouse’s multi-layered interior for In Situ, let’s touch on Lee’s novel culinary approach. Rather than devise an entirely original menu, he “curated” a selection of dishes by other renowned chefs, worldwide. Here’s an à la carte sampling, slated to change seasonally: From Bangkok, Nahm’s David Thompson suggested guinea fowl larp chiang mai. The Copenhagen phenomenon is represented by dishes including wood sorrel with sheep-milk’s yogurt by Noma’s René Redzepi. Shrimp grits came from Wylie Dufresne of New York’s late WD-50. Roy Choi of Kogi BBQ, a Korean taco truck famed in Los Angeles, concocted ketchup fried rice. And of course local legend Alice Waters made a contribution: Meyer lemon ice cream and sherbet from Chez Panisse in Berkeley. How’s that for an amazing palette for the palate?

As for members of the Aidlin Darling team, In Situ struck a personal chord. Darling says he has “always felt a fascination with food and art, particularly their intrinsic connection to place and culture.” Rouse, who is a photographer by avocation, draws an analogy between images and food: “A split-second capture is as compelling as a long exposure. With food, I am interested in the duality of the short experience of eating and its lingering effects on memory.”

Another prime consideration was In Situ’s relationship to SFMOMA as a whole. “The museum has a mission of making art more accessible and less intimidating,” Darling says—so he, Aidlin, and Rouse envisioned a gallery-esque setting, sophisticated but simultaneously a tad rough around the edges. “We also imagined a multisensory experience that would make everyone feel comfortable.” Sights, sounds, and smells would change as patrons entered, either via the highly visible street entrance or through the atrium in SFMOMA’s original building by Mario Botta.

On a more literal level, In Situ’s creation entailed first gutting the existing café to yield a 6,300-square-foot blank canvas for public areas and the kitchen. The window wall is newly framed in painted steel and fitted with butt-glazed panels. Internal walls are now either covered in charcoal-gray felt, to control acoustics, or painted white, to host art. Flooring is gallery-standard poured concrete.

The layout is a break with convention: There’s no bar. Entering from both the street and the atrium, diners arrive at a lounge that’s half for sitting and half for standing or perching on high stools. Tables on both sides have tops of reclaimed cottonwood, those on the standing-perching side being more gutsy hewn-edge creations. That’s furthermore the side anchored by the pièce de résistance, a shimmering mural of an abstracted flower—a clear indication, if one didn’t already know, that this restaurant is in a museum. Slender pendant fixtures in blackened steel, gilded on the inside, help to spotlight the mural. If that doesn’t underline the art point, we don’t know what would.

No reservations are accepted in the lounge. The 70 first-come, first-serve customers get dibs on dishes skewing casual but nevertheless created by top chefs. More formal fare is offered in the main dining area, visually set apart from the lounge by a wide service credenza constructed from concrete and oak—certainly worthy of a double-take, as this massive form seemingly floats on rod supports. Far lighter are the Ronan & Erwan Bouroullec café chairs, inviting in pale oak. To draw eyes from the lounge deep into the dining area, Aidlin Darling naturally turned to art. This time, it’s a beckoning array of 40 small gouaches in gold-painted frames, backdropping the long communal table.

A front-back connector, starting over the lounge and then undulating above the dining area, a canopy of pine boards might just be a site-specific installation. For dessert, so to speak, just go upstairs to take in sculpture by Donald Judd or Dan Flavin in “Pop, Minimal, and Figurative Art.”