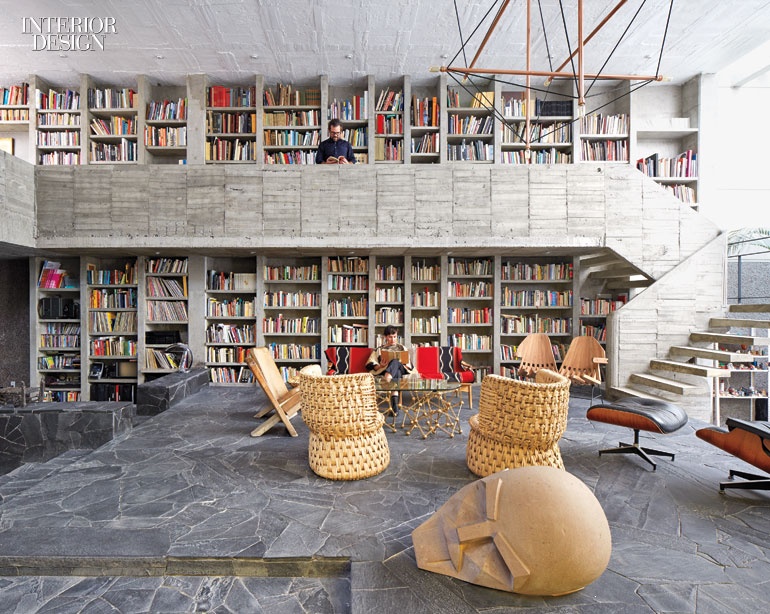 Stones and books are obsessions for Pedro Reyes. And both feature prominently in what this internationally acclaimed artist affectionately calls his “1980’s monstrosity,” a brutalist-inspired Mexico City house that he and his wife, fashion designer Carla Fernández, renovated for themselves and their two young children. Brutalist architecture, now in high demand, is nevertheless not for the fainthearted. Consider the recent film High-Rise, based on J.G. Ballard’s cult novel, in which one of the tragicomic characters inhabiting a concrete tower ends up getting murdered.

Unlike the film’s characters, Reyes and Fernández emerged unscathed from the process of transforming their house, which also serves as their studios. “I am interested in the heroic role played by architecture,” Reyes says. A sculptor who in fact studied architecture, he admits to the “guilty pleasure” of embracing brutalism. Asked about the difference between architecture and art, he says simply, “The pipework.” His passion, however, is clearly not in the plumbing.

The 6,500-square-foot house is a standout in the predominantly colonial district of Coyoacán. Reyes and Fernández spent the first four months, following the purchase, in demolishing walls, removing doors, stripping ugly ’80’s plaster finishes and carpet, and hammering the existing concrete to highlight its texture. Introducing unexpected views and bringing sunlight and fluidity to the rooms, big round holes were punched through walls. Feature walls were painted in a sunny yellow or Luis Barragán’s rusty red.

The drama unfolds once you pass through the front door and encounter a double-height space the size of a gymnasium, where concrete beams support the glass roof. This unusual solarium once sheltered an indoor swimming pool, now covered to function as a water tank. (A useful feature in a city faced with constant shortages.) There was enough room here for Reyes and Fernández to construct their Pirámide del Futuro, a freestanding cinder-block pyramid that divides the space in half, the back used for messy creative work and the front being dominated by the living area.

A platform anchors the living area, and a mezzanine balcony hugs the rear wall, an expanse of built-in concrete bookshelves. “They will have to grow,” Reyes says, estimating that he and Fernández buy 100 books a month. To reach those at balcony height, a staircase with cantilevered steps zigzags up in origami folds. A visitor might easily make the assumption that the library ensemble is part of the original house. Fernández explains that she and her husband went to great lengths to make the new look old.

All has been achieved thanks to a family of masons with whom Reyes collaborates on a daily basis to create his sculpture. “They don’t know the word impossible,” he says. In addition to building the library, they worked diligently for a year and a half to lay the granite flagstones that flow throughout the house—each piece hand-cut and the next one shaped to match. The cavelike kitchen, where everything from the shelving to the island is poured concrete, and the master bathroom, featuring a colossal tub, chiseled out of a single volcanic rock, and a curious sink, sculpted to look like a miniature range of volcanoes, are the family’s handiwork as well.

Evident everywhere is a deep, shared interest in Mexico’s cultural heritage. Fernández works with diverse communities of indigenous textile artisans to produce contemporary clothing under her namesake ready-to-wear label. And the pre-Columbian objects on display at the nearby Museo Anahua­calli, founded by the muralist Diego Rivera, have played a crucial role in inspiring some of the couple’s inventions. Pirámide del Futuro, for example, shows Aztec influences. European and U.S. mid-century classics and vintage pieces, found at flea markets, are part of the mix, too. Then there is the art furniture by Reyes himself. Chairs in the living area reinterpret the famous “hand” chairs by Pedro Friedeberg. Reyes made the fingers the seat, not the backrest, and articulated them.

Besides being an open and inviting family home, filled with the happy chirping of crickets, this is clearly a hothouse for artistic experiments, all conducted with a firm conviction: The future is handmade. Those experiments include the living area’s chandelier, which Reyes constructed by threading electrical wire through copper tubes. Pipework, at last.