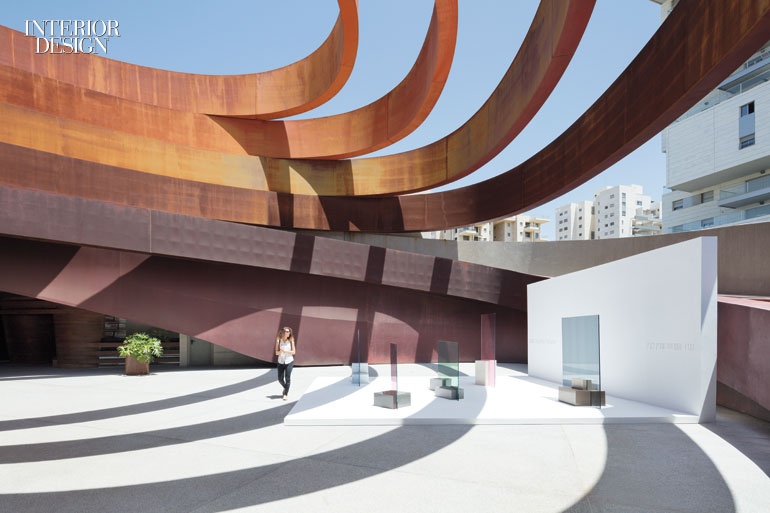 Chocolates and a chess set. A perfume bottle and a watch. Pendant fixtures made with netting. A chair that resembles an exploding cabbage. Glass tables that all but disappear. Graphics galore. Installations for the Salone Internazionale del Mobile in Milan and Maison & Objet in Paris. A shop window for Hermès and a boutique for Theory. These are just a few highlights from the portfolio of the extraordinarily prolific Oki Sato, whose firm is being celebrated in “Nendo: The Space in Between” at the Design Museum Holon near Tel Aviv through October 29. Let’s not use the word retrospective, though. The 14-year-old firm and the Toronto-born, Tokyo-based Sato, who is not yet 40, are too young for that. Plain old exhibition would be more accurate for this museum debut.

Its Milanese curator, Maria Cristina Didero, agrees. She and Sato initially met in Milan, where Nendo maintains a satellite studio, to map out a curatorial approach. “We moved emotionally, not following a chronological path. As I interviewed him, we kept changing things, like in a puzzle,” she explains. “It was an adventure work­ing with Nendo, trying to order so many objects to tell a story.” That’s 74 objects, to be precise, viewed through the overlapping lenses of Japanese, Italian, and Israeli design cultures—arguably another first. Nendo, by the way, is Japanese for clay, endlessly malleable.

Ultimately, Didero came up with an organizing scheme based on six themes: Processes, Textures, Boundaries, Senses, the Object, and, most poetic, Relationships. It’s easy to see that all these ideas lend themselves to emotional layering as well as literal meaning. “Then I selected the pieces according to the themes, including many conceptual and experimental works,” Sato says. “My designs are like sushi. I place a lot of importance on freshness of ideas.”

The pieces from his Thin Black Lines col­lection, for example, fall into the Boundaries section. “Blurring, erasing, or slightly shifting the lines between these boundaries can challenge or loosen our preconceptions,” the ex­hibition catalog notes. The Farming-Net collection of pendant fixtures, made of thermoformed agricultural netting, falls under the Processes heading, which focuses on the examination, reordering, and tweaking of existing methods of production. To understand the Relationships theme, consider the Object Dependencies tables, which would topple over if their bases or tops weren’t weighted down with something else.

So that’s the concept. Here’s how it plays out. In keeping with the Nendo ethos, the exhibition design could not be more minimal. Objects are displayed not on pedestals or in vitrines but, quite simply, inside painted MDF boxes with open tops and rectangular cutouts in the sides. Simplicity allows Sato to add “joy and surprise as if they were seasonings,” he writes. Here, the exteriors of the boxes are pure white, but they reveal the joy and surprise inside, where surfaces are painted in one of six pastels, one per theme, for the subtlest of organizational devices. After all, he adds, “Japanese designers try to look at light and shadows rather than colors.”

“From a distance, each gallery resembles a small village with each display case a building,” Didero adds. “Peering inside is almost like sneaking into a house.” These villages take over the entire museum by Ron Arad Associates, spreading out over more than 8,000 square feet on two levels. But that’s not all. A true design addict, Sato went beyond the boxes to cover the stairwell wall with black line drawings and even video projections. He then broke out of the museum building altogether—with a site-specific sculpture in the front courtyard. Massive slabs of solid-surfacing create a platform for five blocks of the same material, in turn supporting five colored glass panels. With Ron Arad’s bands of Cor-Ten steel curving overhead, the scenario embodies “the Israeli landscape’s powerful shafts of sunlight and shadow,” Sato says. Positioning of elements and viewing stance are crucial to interpretation here, as indoors. Finally, there’s the importance of the exhibition title’s “space in between” that cannot be touched.

“There is something very interesting, some­thing always hidden in the gaps and space in between,” he writes. For him, the experience of putting together this exhibition expanded his already expansive vision. “I was really excited to present my work in this region, which is a new culture for me,” he continues. “My experience in Israel will be food for future design activity.” Bringing him one step closer to his ultimate goal, using design to change the world.