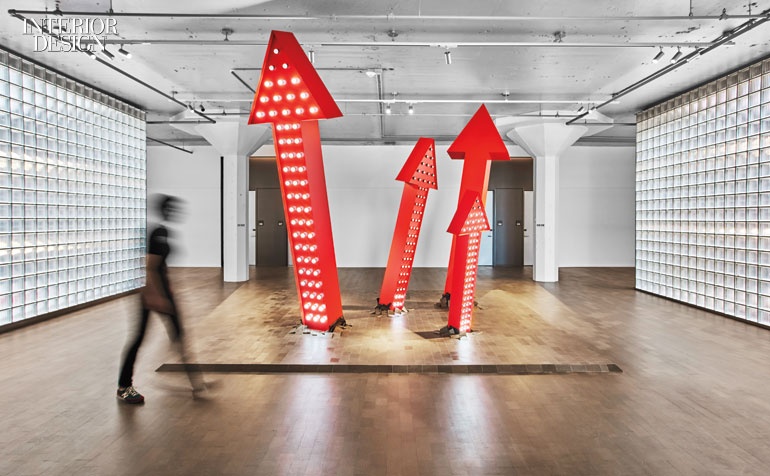 The most important 20th-century architect most folks have never heard of might be Albert Kahn. Decades before artists lived and worked in lofts—or industrial was even considered a style, to say nothing of a superlative—Albert Kahn Architect built factories for U.S. industry. From Kahn’s base in Detroit, his influence, like his oeuvre, fanned out across the country, accompanying the path of the auto­mobile. In 1916, he completed an Oklahoma City plant where the Ford Motor Company could assemble cars flat-packed in Michigan.

“A Model T was just a box of air with a tiny little motor,” Interior Design Hall of Fame member Deborah Berke says, laughing. She’s been a Kahn fan ever since her studies in design history, long before founding Deborah Berke Partners or assuming the deanship at the Yale School of Architecture. So she was thrilled to tour his nobly dilapidated Oklahoma City plant. “We walked through looking for architectural and aesthetic character buried beneath the grime and forgetfulness,” she recalls—and there was plenty of character to find. “It was still a really handsome brick building with beautiful details.” Thanks to the beefy construction materials, it had survived decades beyond its original mission: Ford assembled countless vehicles on the three upper levels, then showcased the finished products behind plate glass in the corner showroom. Think of those cars as technological objects of desire, roadworthy equivalents of the 21st century’s iPhones.

Ford departed in 1968, selling the plant to a former assembly-line worker, Fred Jones, who went on to become a major Ford dealer, and various light-industry tenants arrived. Decades later, hoping to spark a renaissance in the downtown neighborhood—known as Film Row for the Hollywood distribution offices that flourished alongside Ford—Jones’s descendants approached 21C Museum Hotels about converting the building into the sixth Berke-designed property in the chain. That meant such hospitality staples as a restaurant, a spa, a gym, and a conference center, with ballroom, plus public gallery space, in this case 14,000 square feet, for contemporary exhibitions curated in-house.

The old auto showroom, at the corner, beckons through new glazing as the restaurant Mary Eddy’s, named for Jones’s wife. The original terrazzo floor remains, and Berke has artfully highlighted—framed, if you will—a battered concrete mushroom-capital column, cloaked in layers of crazy old paint, as a focal point evoking wabi-sabi chic. “It’s pretty rough. We wouldn’t ever look to make it perfect,” she explains. As a contemporary contrast, a kinetic multimedia installation, complete with conveyor belts, recalls Ford’s assembly line. Elsewhere on the ground level, Kahn’s structural bays impose a strict grid, but the ballroom throws a stunning curve right at the center. Floating between the reception area and the conference rooms, this round space is defined literally by velvet curtains, often drawn back, and visually by the site-specific art installation underfoot: aluminum shapes set into the concrete floor, like a mandala or a patterned carpet.

Dealing with internal spaces, far from any sunlight, was an even bigger challenge on the guest levels. “How do you break down floor plates so vast?” she asked her team. That Brobdingnagian acreage now features 135 spacious rooms and suites. Standard rooms, relatively long and slender, extend inward from the perimeter, but that still left a considerable area unused. The answer was to cut square holes in the structural slabs at three strategic points to create light wells, then make one side of each the “window” for an otherwise landlocked adjacent room or suite. With glass-block walls for the other three sides of the light wells, they also become lanterns flanking central areas that function as galleries. One of them displays a sculpture that takes the form of huge thrusting red arrows illuminated Vegas-style.

For the perimeter rooms and suites, she replaced the original steel-framed casement windows with aluminum versions, taking care to replicate the original mullion con­figuration while specifying low-E double-glazing. Mylar mirrors  butt against the windows on the perpen­dicular, magnifying the view by extending the horizon line. As she notes, however, the mirror’s slight distortion and bronze tint combat any hall-of-mirrors sense of disorientation. Ceilings are painted gray, to match the floors, or white for a gallery look. Her signature meticulousness is evident in the way the exposed electrical conduit is laid out on those ceilings. “We’re fanatics about that sort of thing,” she admits. “Always.” Or almost always. Call the occasional swagged power cords a minimalist’s pun.

Berke has made a career of doing more with less as well as of playing with the boundary between design and art. At the very top of the 21C Museum Hotel Oklahoma City, a penthouse suite sits in the shadow of a water tower still sporting its Fred Jones Manufacturing Co. logo. With a friendly nod to Marcel Duchamp and Rachel Whiteread, the water tower seems to ask: Can an architect simply preserve an existing object as a sculpture readymade? 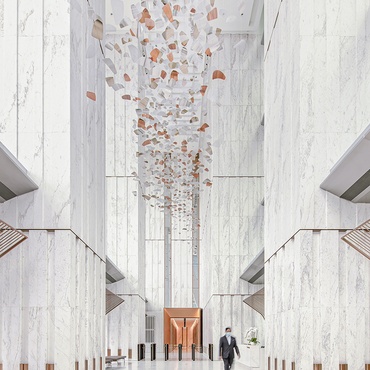