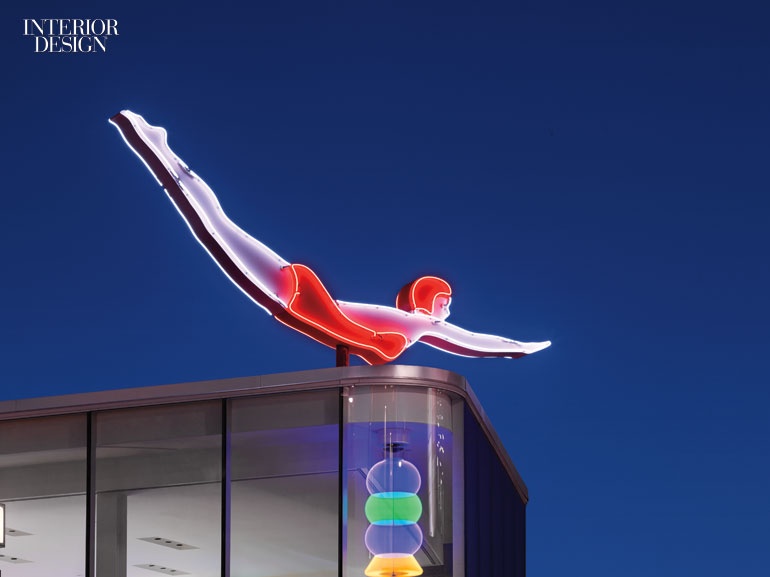 We have lots of MoMAs and MoCAs. Now we have a MoNA. That would be the Museum of Neon Art, finally getting a per­­manent home in Glendale, California, after a 35-year nomadic existence in and around Los Angeles. The project is furthermore a first for the Shimoda Design Group, which had never com­pleted a museum.

Although relatively small for an arts institution, just 8,400 square feet, the project involved “everything but the kitchen sink,” Joey Shimoda says with a laugh. There were two clients, for starters, the private nonprofit MoNA for the interiors and the municipal government for the public promenade and building renovation. Glendale was seeking a culture component as part of a revitalization effort—heretofore, the most notable characters on the city’s cultural scene were Shrek, Kung Fu Panda, Spider-Man, and the Hulk, all products of DreamWorks Animation SKG or Marvel’s local studios.

Originally, the MoNA site consisted of two 1970’s buildings with vacant storefronts, one a discount drug store and the other a video arcade. Shimoda demolished those as well as part of the remaining dividing wall. A further portion of the structures made way for a paseo.

In the larger resulting space, a light-and-bright combination entry and gift shop now flows into a gallery exhibiting both vintage signage and contemporary neon art beneath a painted-out ceiling. (Electrical capability was increased to power everything.) At the rear, a door swings open to a functioning workshop.

To draw the attention of people walking by, on the paseo, he re­invented the facade, installing expansive windows as well as ceramic tile glazed a moody black. But the sure-fire attraction is above: Cantilevering over the entry, a glassy enclosure contains a changing selection of works meant for viewing from afar. What doesn’t change is the 18-foot-wide neon diving girl perched on top. She’s a reproduction of a 1950 sign made for a motel.