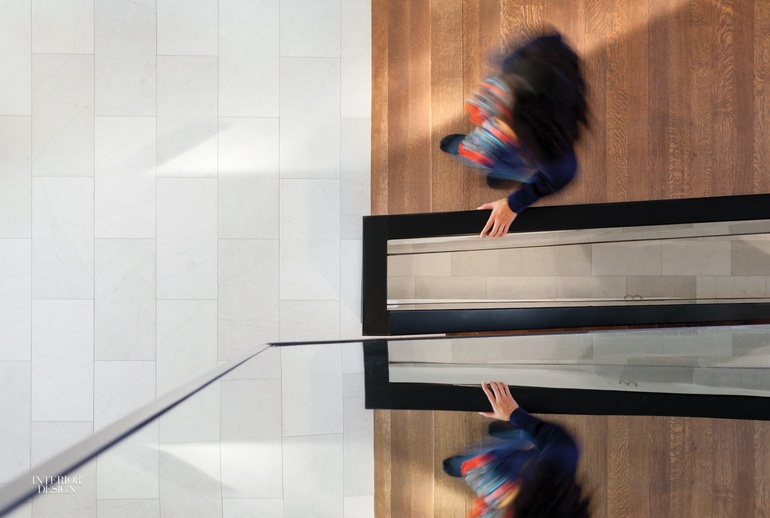 A leafy, prosperous street in Toronto does not seem like the sort of place to scramble your perceptions. Yet once you cross the threshold of this house, then start to mount the stairs, you find yourself caught in a vortex of reflected and refracted light. Up and down, solid and ephemeral—all are suddenly, wonderfully in question.

The phenomenal experience of the staircase, the highlight of the 5,000-square-foot interior, is the reason that the team at Paul Raff Studio Architects calls the place Kaleidoscope House. It furthermore mirrors the interests of its owners, who cover an interesting spectrum. “One of them is a very good artist. Both have engineering backgrounds, and they’re extremely building-science savvy,” Paul Raff says.

“Also, they’re fearless. They’re not concerned about issues of decorum.”

On the front facade, a composition of offset stacked volumes, varied windows punctuate the irregular skin of zinc panels. This surface leans in and out just slightly. “It’s a solid mass of a building, but it has very subtle apertures and inflections that give a complexity of reading from the exterior,” he explains.

While the front garden maintains a rigid geometry, the backyard is ruled by two berms of grass—each outlined by Cor-Ten steel strips and ramping subtly upward in the manner of Diller Scofidio + Renfro’s “lawn roof” at New York’s Lincoln Center for the Performing Arts. For a residential lawn, it’s formally quite ambitious. A similar tension holds indoors, where the quiet combination of gray limestone floor tile and gallery-white walls provides an ideal backdrop for the sizable collection of bold contemporary art and, just as important, the relaxed furnishings for the couple and their teenage son and daughter.

Two giant black-and-white photographs of hands practically explode from the wall behind the rounded white sofa in the small den at the front of the house, buffering it from the street. After the den’s sense of enclosure, produced by the stained oak of the floor and ceiling, the rest of the ground level appears particularly expansive. Beyond the staircase and dining area, the floor steps down toward the living area, where a canvas depicting a male torso hangs next to the flat-screen TV, above a shiny black wedge-shape credenza. The public space also widens here to include the kitchen.

Tall sliding glass doors at the rear of the living area and kitchen are double-glazed, capped by overhangs, and shaded by blinds controlled by a home automation system. That’s just one example of the ways the house prioritizes energy efficiency and comfort. Exterior walls are built of structural insulated panels, tightly sealed, and wrapped in that layer of zinc. “It is more akin to airplane construction than a traditional bricks-and-mortar building,” Raff says.

Likewise aeronautical is the house’s roofline, which rises to allow the insertion of a long clerestory aimed toward the south. The aperture spills sunlight onto the upstairs landing and the master bedroom, which occupies a rear corner. The other three corners are the children’s rooms and a guest room—making this a fairly straightforward center-hall floor plan.

But that central stair is where Kaleidoscope House reveals its artistic heart. With reflective acrylic lining one side of the balustrade, the stair makes a jog at the top to create a set of mirrors that bounces light downward and multiplies it. Though that might sound simple, the experience is remarkably complex.

And that is the point: Raff demonstrates his favorite visual strategy, “passive kinetics,” an idea borrowed from the op art of the 1960’s and ’70’s. “Artists started to discover that the dynamics of motion could be harnessed even in works that are static,” he explains. As an artist, in addition to his architecture practice, he has put this idea to work in successful public projects including one beautiful installation, Mirage, on the underside of a nearby highway overpass.

Back at the house, the effect is surprising. “The staircase doesn’t move, and the reflective balustrade doesn’t move. You move, and the view moves with you,” he says. “The light doesn’t just travel. It actually separates and shifts in intensity, so it adds mul­tiple layers of vitality to what’s otherwise a quiet interior.” It might seem quiet at first glimpse, yes, but there are surprises at the core.