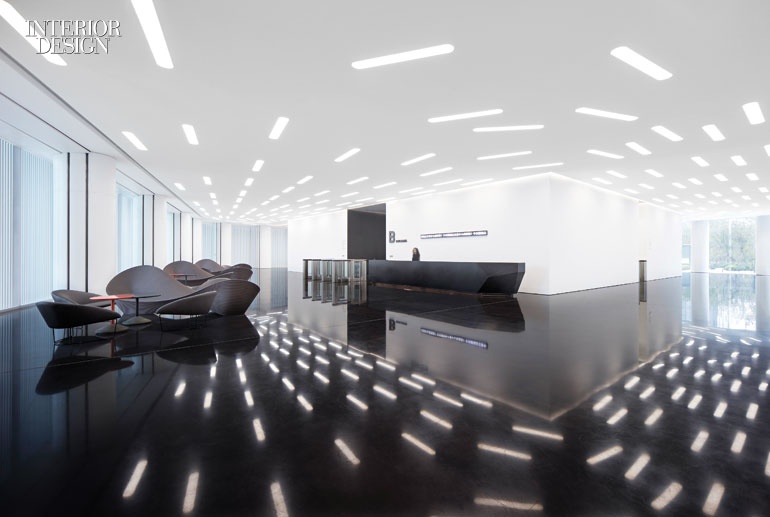 Visions of Silk Road expeditions and terra-cotta warriors, guarding ancient dynasties, are conjured by the mention of Xi’an. Yet its strategic location, southwest of Beijing and northwest of Shanghai, means that the capital city of Shaanxi province is also an important hub for contemporary China, serving as a gateway to the vast interior. For the metals giant Maike Group, Xi’an International Trade and Logistics Park therefore presented the perfect place for a spanking-new trading and operations center combining warehousing, shipping, and information services with executive offices.

To build and furnish the complex, which Maike calls Midwest Inland Port Financial Town, the company held an international competition. The Tokyo architecture firm Interdesign Associates won the commission for a pair of mega-buildings, one sprouting three towers and the other two. The job of handling their interiors, totaling a stupendous 3.5 million square feet, went to a Chinese firm, Hallucinate Design Office. The two firms’ collective task was to create nothing less than a landmark for the city, set on a 19-acre site that resembles a square with a corner shaved off on a curve.

The larger building’s central tower, at 21 stories, was designated for top executives. And that’s expressed by the facade. First comes a curtain wall of extra-reflective low-E glass panels. Adding further dimensionality, the curtain wall is then wrapped by a honeycomb exoskeleton painted a golden color that alludes to the ancient Xi’an practice of stamping official trade documents with a gold seal. This outer layer frames the reflections of neighboring buildings and the surrounding landscape.

Interdesign and Hallucinate also found a way to bring a reference to the city into the smaller building. In the skylit atrium linking the bases of the two towers, dramatically crisscrossing staircases form an X, as in Xi’an. “The X floats,” Inter­design principal Tsutomu Kamo says. “Because we designed the atrium along a north-south axis, the staircases cast an X-shape shadow on the floor when the sun shines through the skylight in the middle of the day.”

But that’s where references to Xi’an end—or references to any aspect of traditional regional culture, for that matter. Kamo and Hallucinate’s founder and creative director, Wang Wenliang, embraced the opportunity to express Maike’s forward-looking, technology-driven DNA. “It’s an international trade center,” Wang says. “Open views, a new spirit, and science were the key points.”

Exemplifying that philosophy, Wang’s favorite part of the project is the innovative enclosure that curves around an elevator bank and service areas, separating them from an expansive lobby on three sides. Seen from the lobby, the towering enclosure presents a surface of white-slatted horizontal bands on which ghostly white numbers appear, moving across. “It’s a bold, surprising design while still being functional and practical,” he says. Other curving forms recur throughout the buildings. Carved out to echo the honeycomb wrapping the executive tower, white solid-surfacing frames views into the atrium from the corridors on both sides. On the trading floors, the desks are C shapes in the same material. The ceiling in the double-height auditorium is articulated by painted aluminum tubes, which enhance acoustics while adding visual interest.

In contrast to the drama of the architecture, Wang exercised reserve when it came to the color scheme. It’s black-and-white, dominated by white. “Introducing too many colors might have brought unnecessary interference,” he says. “Simple design, the clear transmission of information, and avoidance of overdecoration were what we agreed on with our client from the very beginning.” The mate­rials palette is similarly restrained, contributing to the cohesive look. Anodized aluminum imported all the way from Germany was used for the facade’s honeycomb and the slats of the lobby’s screen wall. “The quality is better than the aluminum from local sources,” Wang notes. Flooring in the lobby and the atrium is a dark, reflective artificial stone. Oak makes appearances on the underside of the atrium’s crisscrossing staircases and on the reception desk directly below them as well as for the auditorium’s ganged seating.

Wang believes that the project’s overall success can be attributed to Maike’s open attitude. “The chairman himself attached great importance to the project and gave it his full support,” he says. Surely he was contemplating the legacy of his own business dynasty. No terra-cotta warriors required.