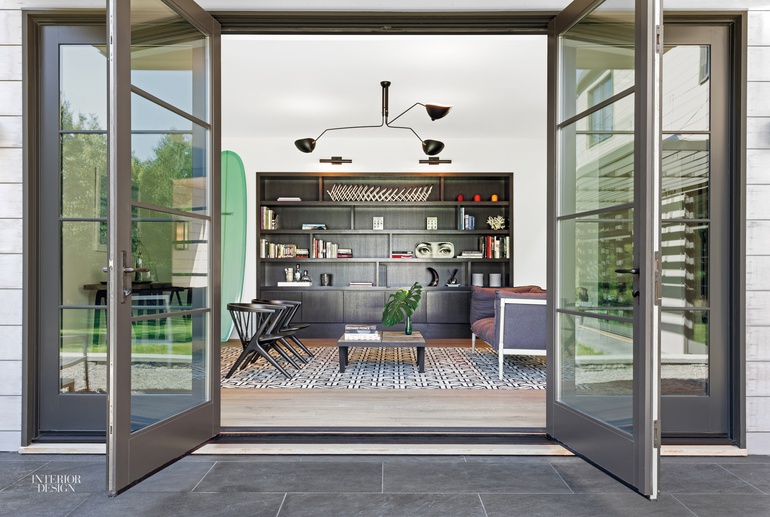 The Eagles said it best in “Hotel California.” You can check out any time you like, but you can never leave.

Though the West and East Coasts share some values, of course, the U.S. is hardly a monoculture—which can make for unfamiliar footing when Californians relocate to New York. Fortunately, CCS Architecture’s Cass Calder Smith was raised bicoastal. His artist mother lived on a commune in the Northern California woods. His father, Howard Smith, was a columnist at New York’s Village Voice in addition to co-producing and co-directing 1972’s Marjoe, winner of the Academy Award for feature documentary. So the young Smith and his siblings shuttled between two different worlds.

That unconventional commute proved ideal as preparation for collaborating on the Hamptons weekend house of an interior designer who had spent part of her childhood in Los Angeles. Mode Interior Designs founder Sharon Bonnemazou and her husband had purchased a secluded waterfront lot in Water Mill, New York, even though the house there was a teardown. While it was being demolished, she was careful to fence an apple tree and to save wisteria vines, now transplanted onto a new arbor. She then edged the site with thick plantings for privacy.

The sketch she handed to Smith showed a house she describes as “rustic, low-key, quietly luxurious.” That vision was partially informed by the modernist residences she had encountered in Southern California. Another influence was the style of houses that her real-estate developer father built in South Korea. Smith, for his part, started from the idea of clustered wooden barns. “We refined them to be as rigorously contemporary as possible,” he explains. “When you’re designing houses near New York, there has to be a connection to people’s life in the city, the style level they expect.” Together, these ideas gelled as a 5,000-square-foot house with perpendicular wings.

Clearly, Bonnemazou has an eye for detail, reflecting her previous career designing textiles and clothing for the likes of Ralph Lauren and Catherine Malandrino. Hamptons design clichés, from shingles to dormers, don’t get even a nod. “I’ve named the look Tomboy Chic,” Bonnemazou says. And forget about hydrangeas. Instead there’s an impressive Japanese maple—think a supersize bonsai tree.

She also has a knack for getting things done. “Number one was budget,” she says. “I spent the money on materials.” The standing-seam roof, for example, is a handsome and durable choice. Oak boards, generally used for floors, appear on the ceiling. Eco-friendly clay plaster surfaces a pair of partitions standing between the double-height entry, where the staircase is, and the wings extending in two directions.

To give distinction and the appearance of extra thickness to the white-painted walls, Smith created deep-set exterior openings for windows and doors. You also see his craft displayed in the woodwork—he was on his way to becoming an accomplished finish carpenter at his mom’s commune, which occupied the site of a defunct lumber mill. “I used to read Fine Homebuilding cover to cover,” he says. At the Water Mill house, the horizontal cedar siding aligns precisely with the window trim, as he took care to specify on the architectural drawings. Bonne­mazou, meanwhile, mixed a few semitransparent stains to find the perfect shade to highlight the wood grain.

The smaller of the two wings contains the living room and the guest quarters below, the young children’s bedrooms above. On the ground level of the larger wing, the open dining area, kitchen, and den spill down the slope toward a porch, sheltered by an upstairs balcony, and the pool beyond. “We just followed the site,” Smith says. Framing the views are windows and French doors with divided lights. “They go with the large scale without being just sheets of glass,” he explains.

Lighting received particular attention. LEDs are concealed on top of oak beams crossing the kitchen, inches below the ceiling. “The bounced, indirect light creates a mood,” he says. The Serge Mouille chandelier in the living room was chosen by Bonnemazou, who’s a huge fan of Tom Dixon lamps, too.

Smith’s agricultural architectural metaphor extends indoors to the master suite, with the barn door that slides back to open the bedroom to the bathroom. The latter’s black granite floor tile and hickory boards wouldn’t look at all out of place at a luxury resort. Nor would the freestanding structure of stained white oak that separates the dressing room from the bedroom while anchoring the simple black four-poster. Another wall displays an unusual object that turns out to be a wedding hat, festooned with chicken feathers, that Bonnemazou bought from the wife of the U.S. ambassador to the Republic of the Congo. Call it West Coast if you must—west coast of Africa.