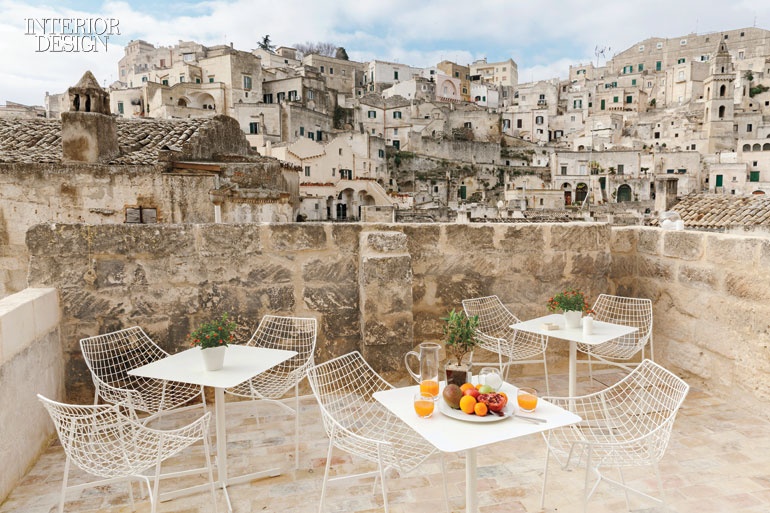 We thought we knew Italy. Really knew it. Not just the design capital, Milan, and the Rome-Florence-Venice tourist triumvirate. Nor simply the glamour destinations, Capri and Positano, and rustic Tuscany. But Matera? Uncharted territory. Yes, vague name recognition for Basilicata, the southern region in which Matera is located. And that was it.

Everything changed when we heard of Matera’s diminutive hotel by the brother-sister firm Manca Studio. We soon learned that tourists arrive via Aeroporto Karol Wojtyla di Bari, named for Pope John Paul II, and that this UNESCO World Heritage site, termed the town of sassi, Italian for stones, is furthermore designated a European Capital of Culture for 2019. “It arose from natural caves in the rock,” Alfredo Manca explains. Human habitation dates to the Paleolithic era. Since history has been recorded, the hill town has seen many masters, the Byzantines and the Normans included. The advent of Christianity in the Middle Ages brought cathedrals built on the plateaus that, with canyons and valleys, dominate the landscape—figuring in the movies shot there. (Christ Stopped at Eboli, The Gospel According to Saint Matthew, and The Nativity Story.)

“There’s an incredible series of elements layered over the course of time,” Marina Manca concurs. “You can walk through the many narrow streets and always find yourself in different corners.” The Mancas know well of what they speak. Natives of Matera, they left only to study architecture at the Università degli Studi di Napoli Federico II. After returning, they established their studio, staying mostly local to design shops, cafés, and apartments.

La Dimora di Metello, taking its name from Matera’s Roman tower, is the siblings' first hotel. “The owners had seen our work and were totally confident in our creative skills,” Marina Manca recalls. More than visual creativity was needed, however. While leaks were fixed and surfaces were cleaned with iron brushes, the Mancas started space-planning. There’s now a breakfast area off reception, a spa, and four guest rooms sharing a terrace. That’s it.

Since municipal regulations were strict, architectural additions were limited to the corridor that connects the guest rooms. Each accommodation is unique, and each has a name, Roman and female. Eumenia and Numisia are the stan­dard doubles. Agapta, slightly larger, is a duplex. The deluxe suite is Metella. “They’re all grotto-type spaces,” Alfredo Manca notes. That translates into walls and arched ceilings carved out of the indigenous volcanic rock.

Melding tradition with a take on today is nothing new among European hotels, of course. La Dimora di Metello nevertheless offers incomparable rewards to the intrepid traveler. In Marina Manca’s words, “It’s a place that surprises with a rigorous and elegant beauty.” What could be more rigorous and elegant than the celebration of unencumbered space? Interior treatments wed ancient to contemporary for an unexpected take on minimalism, if you will. Though the flooring is new, for example, this composite of sand, lime, and fragments of brick has precedents in Roman architecture, according to the Mancas.

Most furniture is custom, much of it in pale oak. That includes the reception desk and nearby tabletops in addition to the guest rooms’ beds, desks, cabinetry, and clothing racks, provided in lieu of armoires or closets. Textiles are natural fibers: panels of linen-cotton for draperies, hand-sewn linen for bedspreads, cotton for sheets. The neutrals take their cue from the color of the indigenous stone.

Meanwhile, light fixtures in the guest rooms are by Jasper Morrison or the team of Achille Castiglioni and Pio Manzù. Other notable production pieces include Christophe Pillet’s ethereal white tables and chairs, which almost float in contrast with the heavy stone of the terrace where they sit. Speaking of the terrace, it’s an all-day affair, perfect, Marina Manca says, “for breakfast, to relax in the sun sipping an aperitif, or to admire the night sky.” To that we add: cin cin.