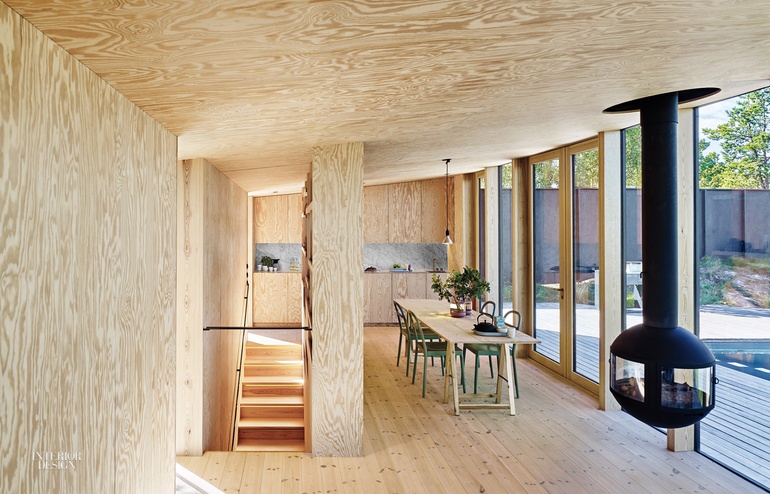 “Everybody was against it,” Andreas Martin-Löf says, looking at the offending infinity pool outside his weekend house in the Stockholm archipelago. “My friends thought it was nouveau riche. They wondered why I couldn’t just go down to the jetty for a swim, like everyone else.” Traditionally, Swedes favor rustic summer retreats, and Martin-Löf concedes that he usually dislikes “luxury” architecture both personally and in his work at Andreas Martin-Löf Architects. Yet he was intrigued by the possibility of the infinity pool as a mirror for the property’s pine trees and expansive water views. “The pool is a crucial part of the success of the house,” he continues. “You have to be a bit playful and take a few risks.”

The house’s site, 15 acres on a steep slope high above the village of Aspvik, has been in Martin-Löf’s family for decades. When his relatives arrived, the only building there was a viewing tower constructed in 1912 in a tiered pagoda style inspired by Chinese teahouses. In the 1960’s, his family added a modernist single-story residence to the tower. When he inherited part of the land, he decided to start from scratch on it.

“As a child, I already imagined the house that I would build,” he says—and it builds, in fact, on its predecessors.  “Relating to the older structures was important. For example, I borrowed the facade from the ’60’s addition, although I made it more contemporary by taking the glass all the way up to the ceiling.” A reference to the pitched roof of the viewing tower is more conceptual, translating into the slight angle of the concrete form that contains the lowest of the house’s three levels.

They add up to 1,000 square feet. Above that basement level, the upper two appear light and delicate, largely wrapped in glass. First comes the bedroom, the bathroom, and a sauna. The top story is devoted to the living and dining areas and the kitchen, which open to an expansive deck with the infinity pool, giving a feeling of uninterrupted space.

He oversaw much of the construction work himself. “Building on a hill was a lot more complex and difficult than I imagined,” he says, noting that the concrete had to be pumped up from a truck on the road 80 feet below. “It was only just possible.” And although the basic vinyl-lined pool was not expensive, it was tricky to add the stainless-steel plates for the two infinity edges.

Concrete and glass, dominating the exterior, give way inside to untreated pine plywood, used for the ceilings, walls, and built-ins. “Having spent my early career doing factory renovations that were mostly plasterboard, I thought I’d see if I could do a project without it,” he says. The plywood also appears in some surprising combinations. A leftover sheet, placed on two trestles, became the dining table. Another unexpected move is the juxtaposition with luxurious marble. In the kitchen, the plywood’s grain acts as a counterpoint to the veining of the Carrara marble counter and backsplash. In the moody bathroom, where matte black Spanish marble covers virtually every surface, the plywood sliding door is a quirky touch.

Plywood was of course helpful in sticking to a limited budget, and he was not afraid to go the off-the-shelf route when expedient. “The width of the cabinet bodies we used for the kitchen determined how wide the house would be,” he reveals. “In general, though, I tried to avoid mass-produced components. Custom solutions give a much more integrated result. I think the tactility of handicraft is a neglected part of good architecture.” For instance, the pine stairs incorporate LED strips, a detail borrowed from cruise ships passing by.

His own hands-on involvement in the house having lasted two years, he concedes it was “a shock” when the construction was finished. “It went from being a project to being a home,” he says. As the location is just half an hour by car from his apartment and studio in central Stockholm, he uses the house year-round. Most weekends find him there. He says his favorite spot is the living area, where the surrounding treetops are reminiscent of the original viewing tower: “It’s fascinating to see a place I’ve known my whole life—but from an entirely new angle.” With an infinity pool in the foreground.