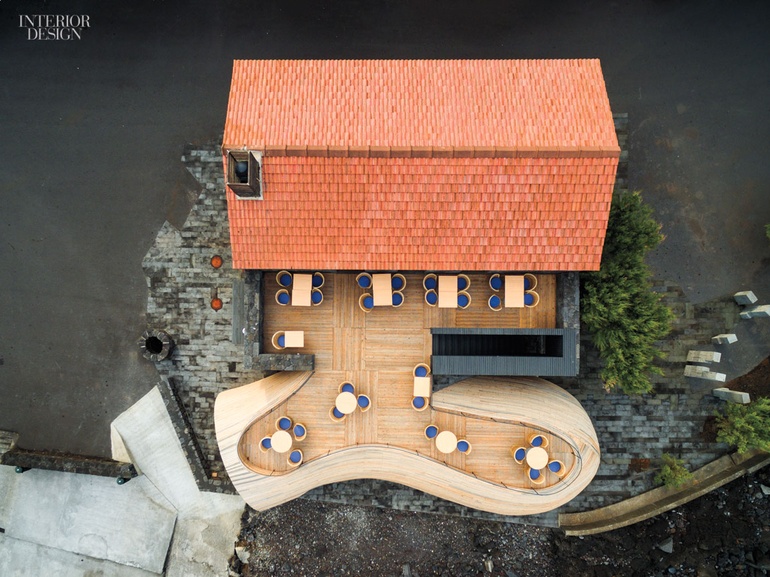 The Azores are unlikely enough as geological formations go, with nine islands sprinkled in the Atlantic Ocean off the Iberian peninsula. Christopher Columbus sailed there on his way back from the New World to Spain, and the archipelago is now about a two-hour flight from Lisbon. So a long-abandoned storehouse for wine on the coast of Pico Island is a truly unlikely hot spot for cosmopolitan travelers. But that’s precisely the scenario of Cella Bar, one of several collaborations between FCC Architecture and Paulo Lobo Interior Design.

Fernando Castro Coelho and Paulo Lobo are a team known for creating tourist magnets in Portugal. Whether a city restaurant or a country hotel, they always feature strict budgets and spare palettes. In the Azores, Coelho and Lobo encountered powerful inspirations. Vineyards and wine culture have earned Pico Island its status as a UNESCO World Heritage Site, and towering in the distance is a reminder of the rich, black soil’s origin: the conical slope of the volcanic Mount Pico, at 7,700 feet Portugal’s highest peak. And while the fine wines have produced commerce over the centuries, it was whaling that brought settlers to Pico’s few towns. Today’s visitors enjoy clambering down epic lava tubes or ascending historic lighthouses.

All these impressions informed the design of Cella Bar, a tapas restaurant and lounge in the town of Madalena, near where ferries leave for neighboring islands. The existing building on the site was a 1930’s storehouse for wine—the stacked dark basalt now meticulously cleaned. To that structure, Coelho added a highly imaginative rear extension, its elaborately installed cypress boards concealing the concrete shell everywhere but the base. “We imprinted the renovation and the addition with every spirit that breathes on this special island,” Coelho explains. “There’s the old volcanic rock, arches that reference the ocean’s waves, the curves of whales’ bodies. And the new wooden cladding is like staves. What better form for a wine bar than a giant wine barrel?”

The storehouse’s original back doorway now connects to the addition. Instead of exiting to the rugged coast, with the wild ocean beyond, one enters a surprisingly curvaceous structure indeed suggesting a whale’s belly, a barrel, or perhaps a ship in construction. Projecting a nautical air, lengths of cypress reappear to line the shell, while notched forms rise toward the ceiling. Coves are fitted with LED strips to highlight the spatial play, and the floor’s huge ceramic squares, mimicking bluestone, add depth and solidity. The view still makes a statement, framed by small portholes, long slot windows, and an enormous round window at the end.

Although the materials are suitably rough and brash, the interior imparts an austere seaside elegance. Armchairs surrounding the café tables in the addition are upholstered in pale blue wool, offering comfort and warmth. Traditional standing lamps, with pleated shades, contribute to the chiaroscuro effect created by the controlled daylight.

With the extension adding only 900 square feet to the storehouse’s existing 1,000, Cella Bar’s light touch is highly appreciated in a region focused on sustainable design and ecotourism. But that meant Coelho and Lobo needed to program the available space with the utmost care in order to maximize the money-making potential of the restaurant. The dining and drinking areas for patrons had to be roomy enough without skimping on the support spaces.

Guests arrive from a terrace that’s paved in basalt—with ample drainage, able to withstand hits from the big surf—and punctuated by a few bollards with unfussy appeal. The primary entrance is via the storehouse’s lower dining room, which shares the ground level with the kitchen, dry storage, and restrooms. The sequence then continues either into the addition’s dining room and bar or up the stairs to yet another dining room and bar. Next to that one, a door opens to a deck that straddles an oblong section of storehouse roof and an organic, asymmetrical area on top of the extension. Guests here can settle into rattan seating to take in the sun, with a salty breeze, or the cool mists that often prevail.

It’s an efficient plan for a simple yet compelling attraction, composed with equal measures of old stone and fresh timber as well as modish furnishings. Visitors feel the thrill of the Azores’ oceanside splendor and at the same time the protection of a captivating cocoon. There’s live music on the weekends, too. Lobo, who DJs back in Porto, might be spinning here soon.