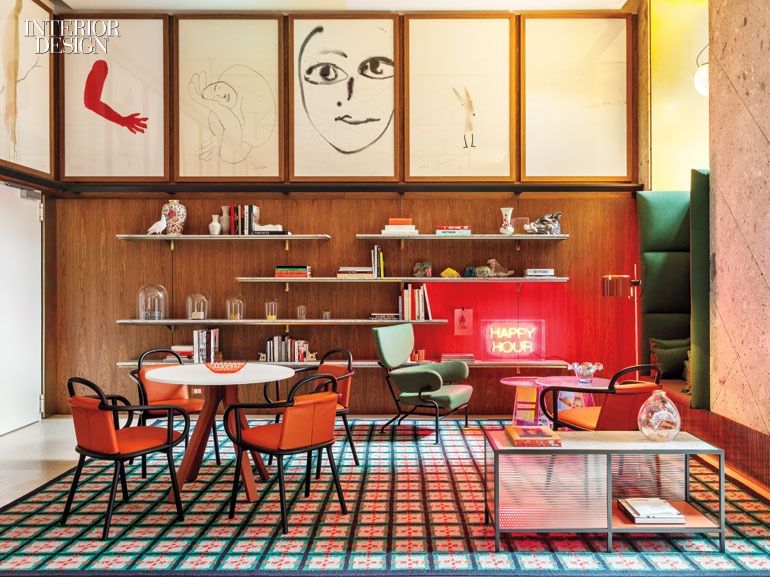 When Patricia Urquiola’s good friend Enrique Sarasola asked her, not for the first time, to design a property for his international Room Mate chain of affordable lodgings aimed at the Airbnb crowd, she told him it could happen only if the new property were “at kilometer 0” relative to her home and studio in Milan. “I was only a little bit joking,” the Interior Design Hall of Fame member recalls. It’s just that she’s been busy.

In recent months, she’s introduced a sofa with belt-strap detailing for Moroso, a bathtub with a stainless-steel frame for Agape, and modular sofas, perched on aluminum I-beams, for Cassina, where in her new role as art director she’s active in updating product lines, digging into archives, refreshing showrooms, and even reorganizing factories in preparation for the company’s 90th-anniversary celebration. Then there’s an entirely different, more luxurious hotel project: Il Sereno Lago di Como, which she is building from the ground up for an August opening. It’s a lot.

Room Mate offers the relaxed feeling of crashing at a friend’s place, and each of the 23 hotels bears a regionally resonant first name such as Kerem (Istanbul) or Pau (Barcelona, Spain). A fellow Spaniard who’s a former Olympic equestrian, Sarasola let Urquiola choose for Milan. She picked Giulia, after her eldest daughter. For his part, he found a five-story bank building from 1910—not quite literally “at kilometer 0” for Urquiola but very central, round the corner from the imposing Gothic facade of the Duomo di Milano.

The bank’s reinvention was accomplished in collaboration with DWA, founded by Alberto Artesani and Frederik De Wachter, and the result is clearly the alter ego of Urquiola’s upcoming hotel on Lake Como. Whereas Il Sereno is rigorous and architectural, Room Mate Giulia is textured, colorful, playful, and, most important, connected with a wink to local history. “It’s a different game,” she says, “a different way of finding quality.” Almost every detail refers to Milan or surrounding Lombardy.

In the lobby, a convex wall’s terra-cotta brick creates a three-dimensional woven pattern that suggests the region’s architecture. Other walls are clad in a native stone in the same pinkish gray as the marble seen at the Duomo. The creamy terrazzo looks like the floors that could once be found in all of Milan’s little espresso bars. Alluding to the frequent glimpses of bronze around town, there’s a “semi-gold” finish, Urquiola says, on various steel elements. She even had the clout to convince Oluce to produce its Coupé floor lamp by Joe Colombo with copper plate instead of lacquered aluminum. Bathroom fittings are matte black.

As soon becomes obvious, the hotel’s Milanese references are oblique and personal, rather than ripped from a tourist guidebook. The grid motif found on carpet, rugs, curtains, and wall covering refers to the industrial city’s “rigor,” she says. Photographs and other artwork have a spontaneous charm. This is especially true in the lobby, where whimsical watercolors, vastly enlarged, have been installed as a frieze.

Of the 85 guest rooms and suites, no two are alike. If you’re lucky, you can nab one offering a balcony with a view of the glass dome of the Galleria Vittorio Emanuele II. But there is nevertheless consistency in the freewheeling, somewhat industrial look. Each room is color-coded blue, green, or orange—with counterpoints provided by the vibrant upholstery on the furniture, mostly Urquiola’s production pieces in combination with modern classics and custom designs. Nakedly structural desks, nightstands, and shelving systems framed in steel, like Meccano sets, playfully echo the grid motif of the curtains and walls.

These steel items as well as the steel reception desk are good examples of what she means by “a different way of finding quality.” In a low-cost process, the metal was chemically treated to acquire a golden gleam that harmonizes with the hotel’s overall palette. It also stretched the budget to custom-produce the beds, with their padded headboards; the bathroom mirrors hung from leather straps; and the breakfast room’s banquettes, which she paired with her own Windsor-esque chairs. (The hotel’s main restaurant, still under construction, is slated to open in September.) Further savings came from using economical square white bathroom tile—applying grout in the same color as the wall and ceiling made the grid effect more pronounced.

It all adds up to an idiosyncratic mix of gentle irony and wide appeal. Above all, however, the hotel is Urquiola’s valentine to her adopted city, positioned at the intersection of her heart and her imagination.