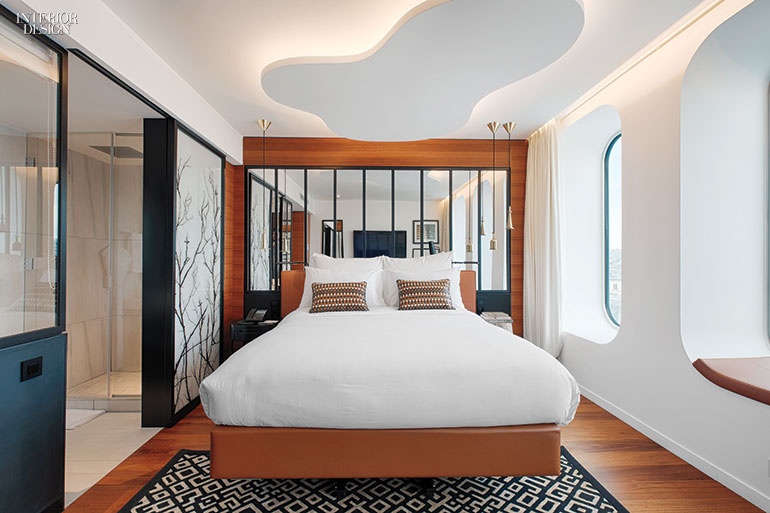 Seeking inspiration for the Renaissance Paris Republique Hotel, Didier Gomez simply looked out the building’s front doors and took in the surrounding neighborhood, along the Canal Saint-Martin. “It was originally working-class and has now become very bobo, bourgeois bohemian,” Gomez says of the area, which had few four-star hotels before Marriott International’s Renaissance brand arrived. “This is also multicultural Paris, with its different waves of immigration from North Africa and West Africa as well as Asia.” Artistic creativity and ethnic diversity were therefore key for Didier Gomez Interior Design in devising a decorative scheme for the hotel, which occupies a converted 1970’s bank with a facade dominated by retro-futuristic lozenge windows.

Symbolizing French achievements in design, the lobby boasts a museum-quality assortment of modernist seating by Pierre Guariche and Joseph-André Motte. Gomez also commissioned local talents—a street artist, a collage specialist, an animator and illustrator, and two photographers—to contribute abstract works on paper with “A Stroll in the Other Paris” as their subject. Channeling the neighborhood’s global flavors, meanwhile, the red reception desks’ faceted forms remind Gomez of origami, and behind them he installed ceramic sculptures that recall African tribal idols. African textiles are the reference point for the boldly geometric fabrics of pillows and throws in  the 121 guest rooms.

His extensive use of gray marble, both inside and for the walls of the side courtyard, offers a further tribute to the city. “Gray is the dominant color of Paris,” he says. “Its facades, the metal roofs.” Other natural materials, notably wood, contribute softness and warmth. Teak panels much of the ground level including the restaurant, where dining nooks are flanked by teak shelving that contains books by and about French artists, designers, musicians, and literary figures. Teak then reappears in many of the guest rooms, while their sleeping and bathing areas are separated by sliding screens embellished with a tree-branch motif. Ceiling coves and canopies are shaped like clouds. The spa’s orange ceiling, a rare splash of bright color in the hotel, symbolizes sunshine and health.

Taken together, the hotel is an elegant mélange. Think classic and contemporary, art and nature, French pride and foreign accents.